During Friday's Mad Money program Jim Cramer told viewers his game plan for several stocks this week. On Tuesday, Cramer said he will be focused on the retailer, Dick's Sporting Goods (DKS) , which is poised to rally as team and youth sports return after a year-long hiatus. The company is scheduled to report its quarterly numbers before the opening Tuesday.

In the daily bar chart of DKS, below, we can see that the shares have made a significant recovery from their March 2020 lows. Prices are close to making a new high for the move up after a very recent test of the rising 50-day moving average line.

The trading volume has been shrinking since November and that is not a positive development. The On-Balance-Volume (OBV) has been weakening since early February and suggests that traders have gone from aggressive buyers to aggressive sellers.

The Moving Average Convergence Divergence (MACD) oscillator turned lower in early February for a take profit sell signal. Recently the MACD oscillator has begun to narrow. Maybe the earnings report is the spark to turn this indicator bullish.

In the weekly bar chart of DKS, below, we can see a mixed picture. Prices are in a longer-term uptrend above the rising 40-week moving average line.
Trading volume has been diminishing the past four months and old-time chart readers consider that a sign of weakness. The OBV line has been stalled since October and this is a bearish divergence when compared to the price action making higher highs the past few months.
The MACD oscillator looks like it will make a double top pattern soon and that too would be a bearish divergence when compared to the price movement making higher highs.

In this daily Point and Figure chart of DKS, below, we can see an upside price target in the $100 area. 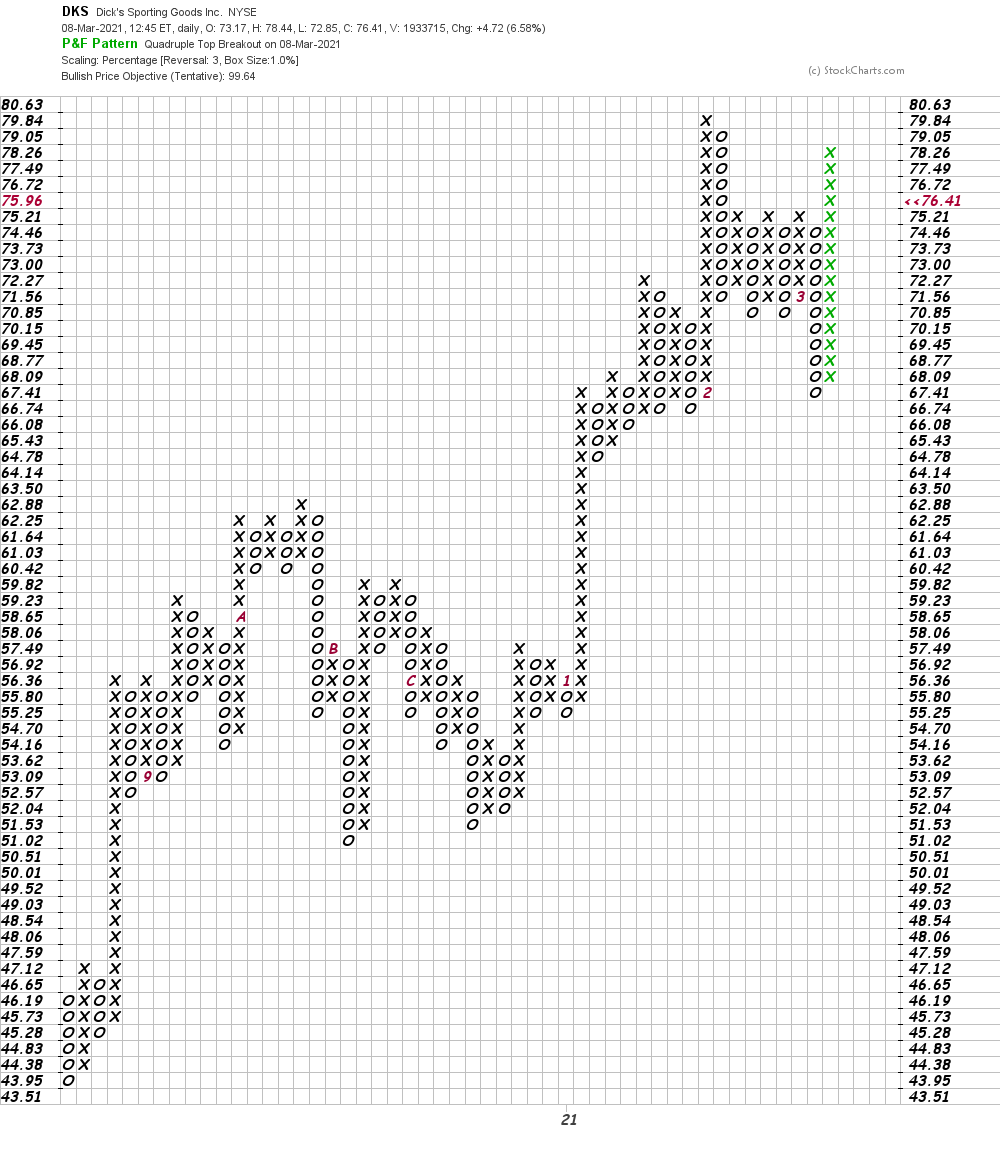 Bottom-line strategy: DKS is rallying ahead of earnings. Is this short-covering or new buying by traders anticipating a set of good numbers? I have no idea but there are some bearish divergences but that does not always foreshadow a reversal. Was that Delphic enough for you?
Get an email alert each time I write an article for Real Money. Click the "+Follow" next to my byline to this article.
TAGS: Investing | Stocks | Technical Analysis | Retail | Mad Money | Sports | Earnings Preview