During Friday's Mad Money program host Jim Cramer laid out his game plan for this week. On Thursday, we will get earnings results from railroads Union Pacific (UNP)  and CSX (CSX) . Cramer told viewers that he would be a buyer of the latter.

I have not hitched a ride on the charts of CSX since July 20 when I wrote that, "Traders could go long CSX ahead of earnings, or if they are risk averse after earnings. Risk a close below $65. $82 and $100 are our price targets." Last week the shares stopped short of our $100 price target so let's check out the charts again.

In the daily bar chart of CSX, below, we can see that the shares pushed up quickly to a new high in the first half of January but this rally has been reversed. Prices are still above the rising 50-day moving average line but another test of this line seems more likely now. The slope of the slower-to-react 200-day moving average line intersects around $77.

The trading volume has been shrinking since late November and did not expand when prices temporarily broke out to new highs. The On-Balance-Volume (OBV) line shows a recent January peak and the start of increased aggressive selling. The Moving Average Convergence Divergence (MACD) oscillator peaked in November and is now close to the zero line -- not the picture of a strong trend.

In the weekly Japanese candlestick chart of CSX, below, we can see a mixed picture. There is an upper shadow above $95 telling us that traders have so far rejected these recent gains. The slope of the 40-week moving average line is positive and the OBV line is pointed up but still sits below the best levels of 2018 and 2019.

The MACD oscillator has been narrowing since November and tells us that the strength of the trend is waning.

In this daily Point and Figure chart of CSX, below, we can see a potential upside price target in the $116 area but also that weakness to the $89 area could precipitate further declines. 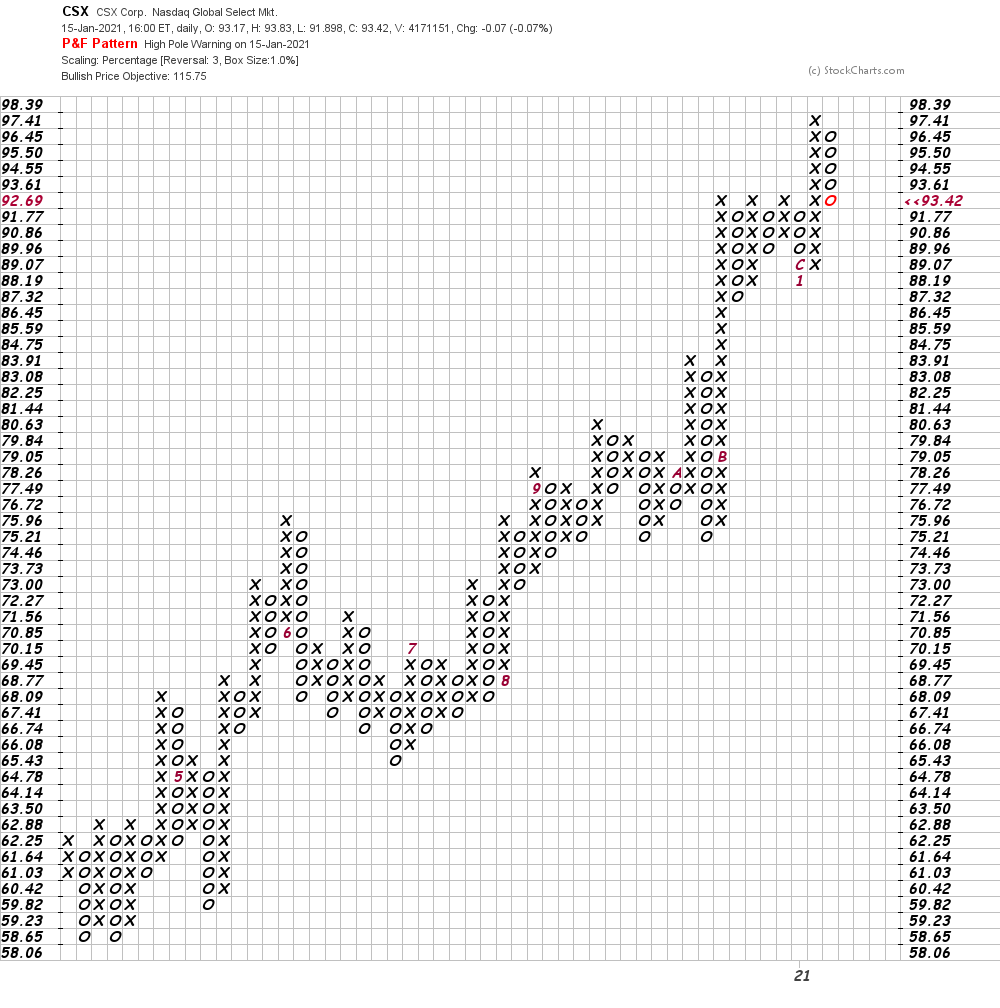 Bottom-line strategy: CSX is still in an uptrend and we do have a higher Point and Figure price target, but I do not get the sense that CSX buyers have been buying aggressively in advance of Thursday's earnings. I would look at CSX again for purchase if there was a "shake out" in the next couple of weeks.

Get an email alert each time I write an article for Real Money. Click the "+Follow" next to my byline to this article.
TAGS: Investing | Stocks | Technical Analysis | Transportation | Mad Money | Earnings Preview