Let me remind you I am not a commodity expert, but I think I can read a chart, and I look at the chart of crude oil (May contract) and I see a chart that peaked in early March, came down to a well-defined uptrend line, rallied to a lower high and is heading down again. On Wednesday, it made an attempt to break that line that has been in place since December. It hasn't broken yet, but since everyone is so focused on inflation, I wonder what happens if oil breaks that line? It's already under $100 and no one really fusses anymore. What if it came down to $90?

Earnings season is coming up, too. All I've heard for the last few days is that the earnings season will be terrible. It may be. But in my four decades of doing this, it is my experience that companies who have missed big will pre-announce. We are a week into April, which means quarterly books closed a week ago and how many earnings pre-announcements have we had that are of major importance? I can't think of any.

It's possible when earnings are released they will miss. It's even more possible that companies will ratchet down their expectations for the remainder of the year. But thus far that has not been the case.

I noted for the last week that the bears have thinned. They continue to thin, at least in this week's Investors Intelligence survey. The bulls are now at 39% and the bears are at 31%. At the March lows there were more bears than bulls but that is no longer the case. 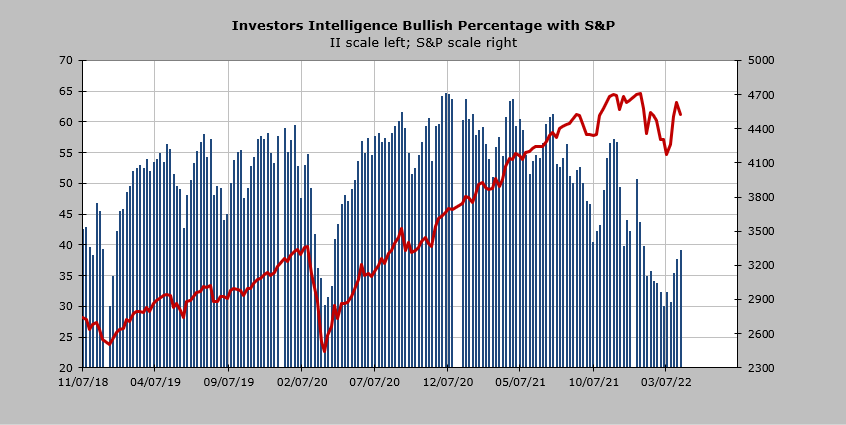 The put/call ratio has returned to an elevated level, but that means the 10-day moving average is back to rising, which is not supportive of the market.

Breadth in the market has been dodgy, but has kept the McClellan Summation Index rising. But after Wednesday's action that indicator has now stopped going up.

The number of stocks making new lows is rising again but if we look at Nasdaq we see that the new lows would have to triple just to reach the level that they were at in mid-March. So it's not great that they are rising, but it's not as bad as it was a few months ago. 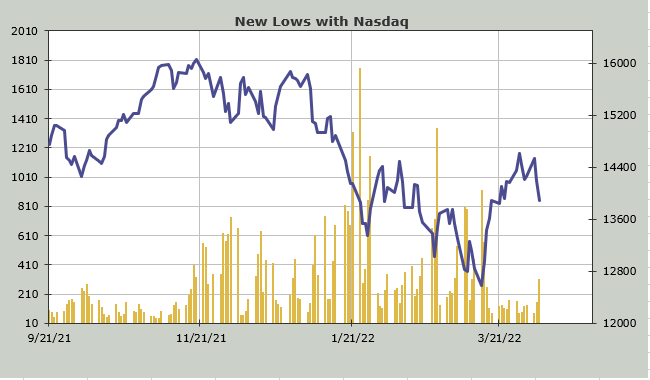 Finally there are the bonds, which now have the Daily Sentiment Index (DSI) back to 13. If bonds fall any more (rates rise), this ought to get to single digits, which would set up another rally in bonds.

Get an email alert each time I write an article for Real Money. Click the "+Follow" next to my byline to this article.
TAGS: Investing | Oil | Stocks | Technical Analysis |