In his first "Executive Decision" segment of Mad Money Thursday evening, Jim Cramer spoke with Jim Snee, chairman and CEO of Hormel Foods (HRL) , which announced the acquisition of the Planters brand for $3.35 billion.

Snee said Planters is the clear market leader in peanuts and cashews and is another billion-dollar brand for Hormel. The acquisition also gives Hormel deeper penetration in snacks.

Let's check what we have in the pantry to snack on while we check out the charts of HRL.

In the daily bar chart of HRL, below, we can see some potential problems. Back on Nov. 23 when we last reviewed the charts we recommended, "HRL has tested the rising 200-day moving average line in recent weeks. The flat OBV line suggests we could see another test of this indicator and that test may see prices break lower. Protect long positions." Prices slumped lower from late November to the middle of January before staging a rebound. Prices have crisscrossed the now flat 200-day moving average line.

The trading volume increased in the past six weeks but the On-Balance-Volume (OBV) line shows a decline from August and that trend tells us that sellers of HRL have been more aggressive. The trend-following Moving Average Convergence Divergence (MACD) oscillator recently moved above the zero line for an outright buy signal but prices are still making lower highs since August.

In the weekly Japanese candlestick chart of HRL, below, we can see a mixed to bearish picture. Prices are just slightly above the declining 40-week moving average line. The most recent weekly candles show upper shadows above $49 telling us that traders have been rejecting those highs.

The OBV line made a new high for the move up in January which is a different picture than the daily chart. The MACD oscillator is now crossing upwards for a cover shorts buy signal.

In this daily Point and Figure chart of HRL, below, the software is "reading" the X's and O's and has decided they are bearish with a potential downside price target in the $35 area. 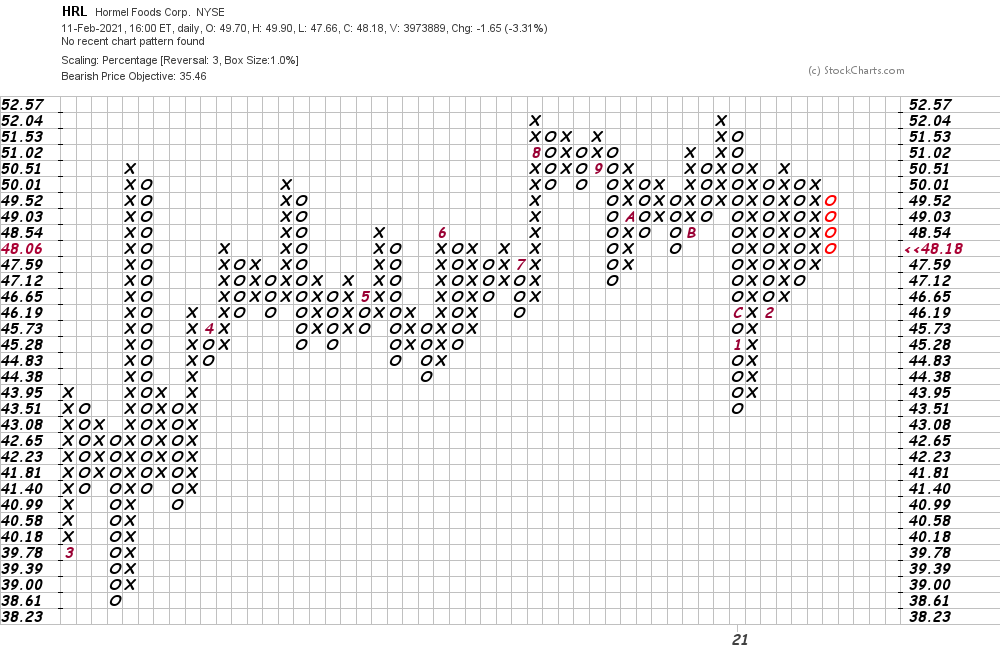 Bottom-line strategy: In full disclosure I love snacking on cashews but the charts and indicators of HRL right now suggest renewed declines in the weeks ahead. Stand aside for now.

Get an email alert each time I write an article for Real Money. Click the "+Follow" next to my byline to this article.
TAGS: Investing | Stocks | Technical Analysis | Food & Staples Retail | Executive Interview