Snee said Hormel is seeing strength across all of its brands amid the coronavirus outbreak. It's not just Hormel, Snee added, the entire U.S. food industry is stepping up production to meet demand and calm consumers' fear of empty shelves.

Snee said that China is returning to normalcy. He said their plants are up and running and are fully staffed and they're seeing a recovery in both retail and food service.

Let's see if the charts of HRL have begun to recover.

The daily On-Balance-Volume (OBV) line declined modestly into a March low but has begun to rise again. The Moving Average Convergence Divergence (MACD) oscillator has turned up and crossed to a cover shorts buy signal.

In the weekly bar chart of HRL, below, we can see that prices are now back above the rising 40-week moving average line. The weekly trading volume has been rising in recent weeks, which is a positive vote by buyers. The weekly OBV line is starting to turn up after about six weeks of decline.

The MACD oscillator has begun to narrow and could soon generate a fresh outright go long signal.

In this Point and Figure chart of HRL, below, we used daily price swings to create the chart. Notice the upside breakout? Here the software is projecting a potential upside price target in the $75 area. 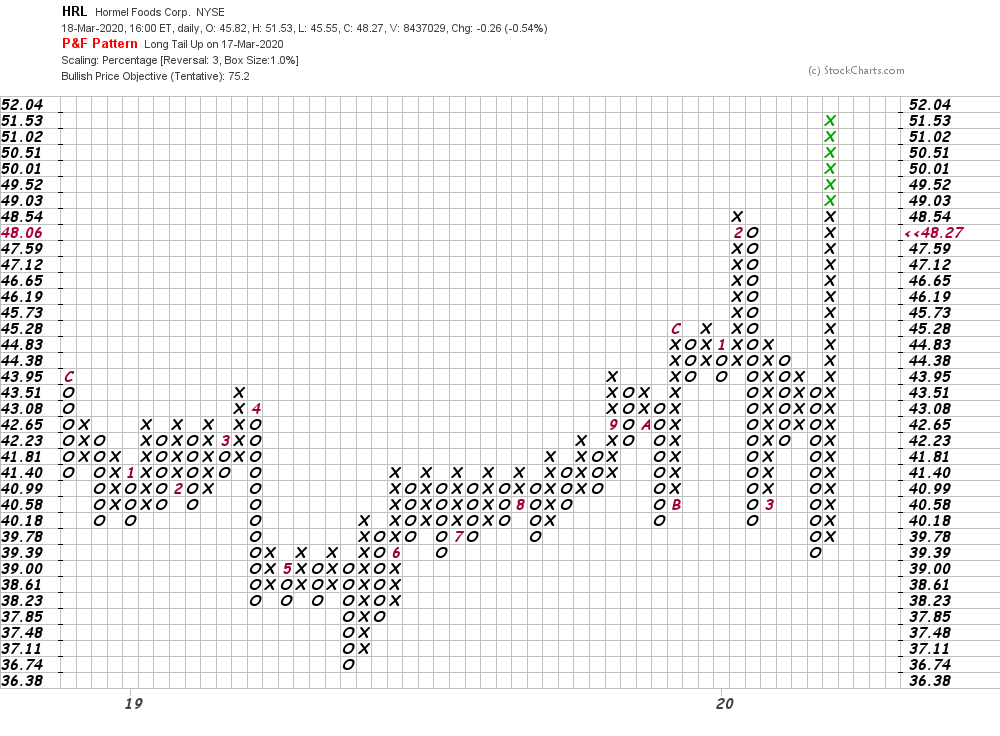 Bottom-line strategy: Someone just showed you a bullish set of charts and indicators. Will you consider going long or will you stay bearish because you see so many other stocks that are weak? It is a market of stocks and not a stock market is the old saying. I would approach HRL from the long side risking below $47.

Get an email alert each time I write an article for Real Money. Click the "+Follow" next to my byline to this article.
TAGS: Investing | Stocks | Technical Analysis | Food & Staples Retail | Mad Money | Executive Interview | Coronavirus