Home Depot Inc. (HD) is set to report third-quarter earnings on Tuesday. Let's pay a visit and check out the charts and indicators and see if we can handicap the next move.

In this daily bar chart of HD, below, we can see that price traded higher into a September peak and corrected sharply in October. Prices recently have moved back up toward the underside of the declining 200-day moving average line. The slope of the quicker-to-react 50-day simple moving average line turned bearish in early October. Volume increased into the October low, but the daily On-Balance-Volume remained pointed down and suggests that aggressive buyers have not returned despite the price reduction. The daily Moving Average Convergence Divergence (MACD) oscillator moved below the zero line in early October for an outright sell signal and in early November crossed upward, signaling a cover-shorts buy.

In this weekly bar chart of HD, below, we can see that prices nearly doubled in the past three years. The slope of the 40-week moving average line was positive the entire time, but a shift lower can be seen in October. The 40-week line served as support in 2017 and early 2018 but now it may act as resistance. The weekly OBV line shows a peak in January of this year and an irregular decline, suggesting months of liquidation into strength. The weekly MACD oscillator crossed to another take-profits sell signal in September at a lower high than in January. This indicator is close to crossing the zero line for an outright sell signal.

In this Point and Figure chart of HD, below, we can see an upside price target of $221, but we also can see that a decline to $168.38 would be a new low for the move down. This would turn the chart very bearish. 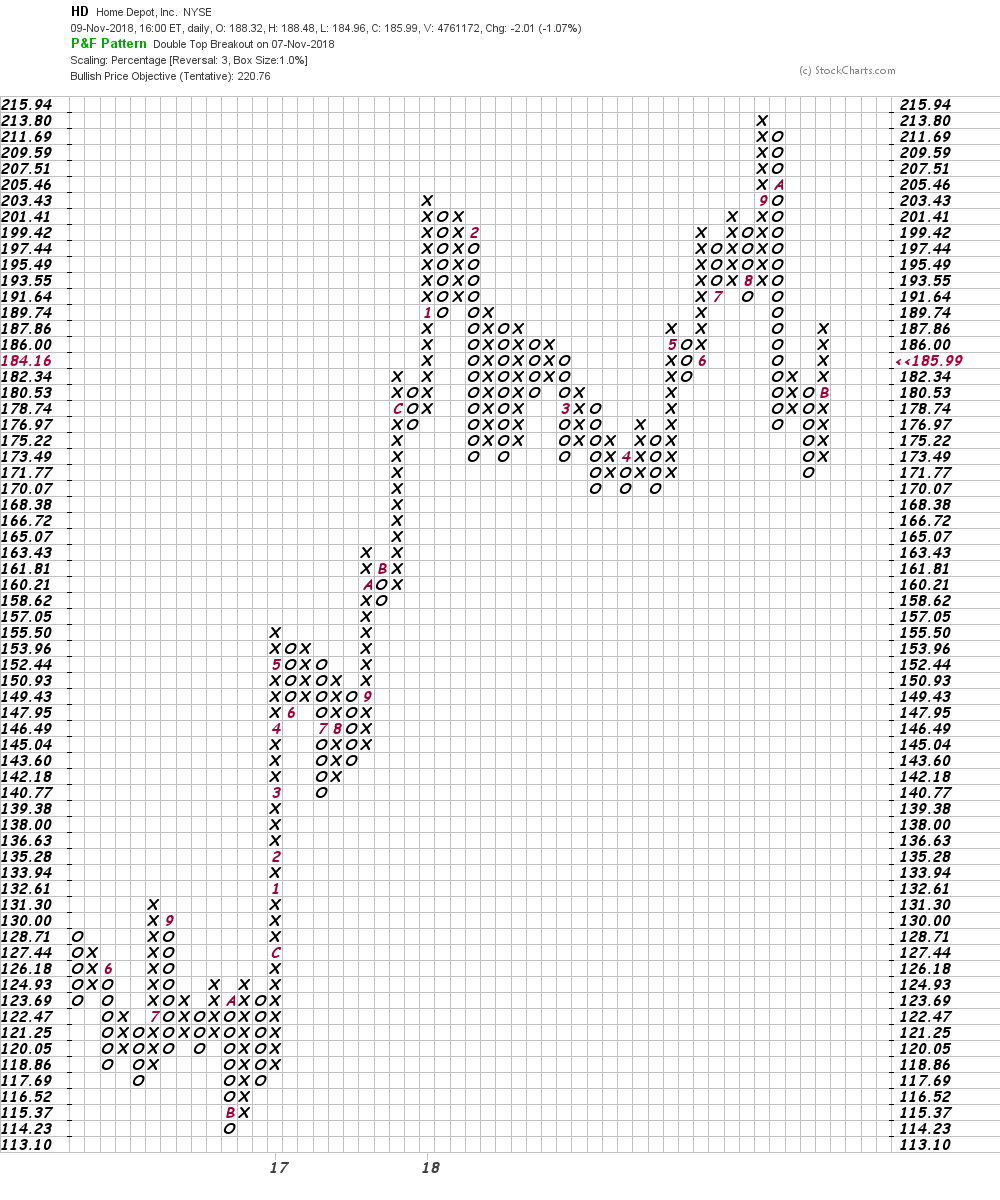 Bottom line strategy: With a number of daily and weekly technical sell signals on HD ahead of earnings on Tuesday I would not hold a long position ahead of the news. HD could surprise on the upside, but the bigger risk is if HD closes below the April and October lows.

Get an email alert each time I write an article for Real Money. Click the "+Follow" next to my byline to this article.
TAGS: Investing | Stocks | Consumer | Retail

I have consistently underestimated the power of the rally in CMG.

There are several reasons why I like both names here.

Taking a chunk of Pfizer during this selloff, while Amazon has raised $10 billion in mixed-maturity debt and all eyes are on the government's response to civil unrest in the U.S.