For his "Executive Decision" segment, Jim Cramer sat down with Carol Tome, retiring CFO of Home Depot Inc. (HD) , after a remarkable 24-year career at the company.

Tome said HD is now 40 years old and she's been CFO for nearly half of that. She said one of the keys to her success has been that she's a business person first and a finance person second.

When asked about our economy, Tome said Home Depot learned a long time ago that if home prices are rising, then consumers will invest in and remodel their homes.

When asked about her legacy, Tome said she's most proud of the people, and especially of the women, that HD has added to its team.

There are three "teams" when it comes to investing. The fundamental team, the quantitative team and the technical team. Let's check out the charts this morning.

In the daily bar chart of Action Alerts PLUS holding HD, below, we can see that prices have retraced the fourth-quarter 2018 decline and pushed up to a new high this month. Prices moved higher in three "waves" from late December and are now above the rising 50-day moving average line and the flat 200-day line.

The daily On-Balance-Volume (OBV) line has moved up from late February but only modestly, which tells us that buyers have been more aggressive but not particular strong.

The Moving Average Convergence Divergence (MACD) oscillator is above the zero line but it has crossed to the downside for a take profits sell signal. Also, note that the MACD oscillator has not made a new high like prices did for a bearish divergence versus the price action.

In the weekly bar chart of HD, below, we can see that prices are above the slightly rising 40-week moving average line. The weekly OBV line has moved up from a December low but has not made a new high like prices have -- a bearish divergence.

The MACD oscillator on this longer time frame is bullish but it has narrowed in recent weeks.

In this Point and Figure chart of HD, below, we can see a recent breakout at $211.69 and a potential upside price target of $260. 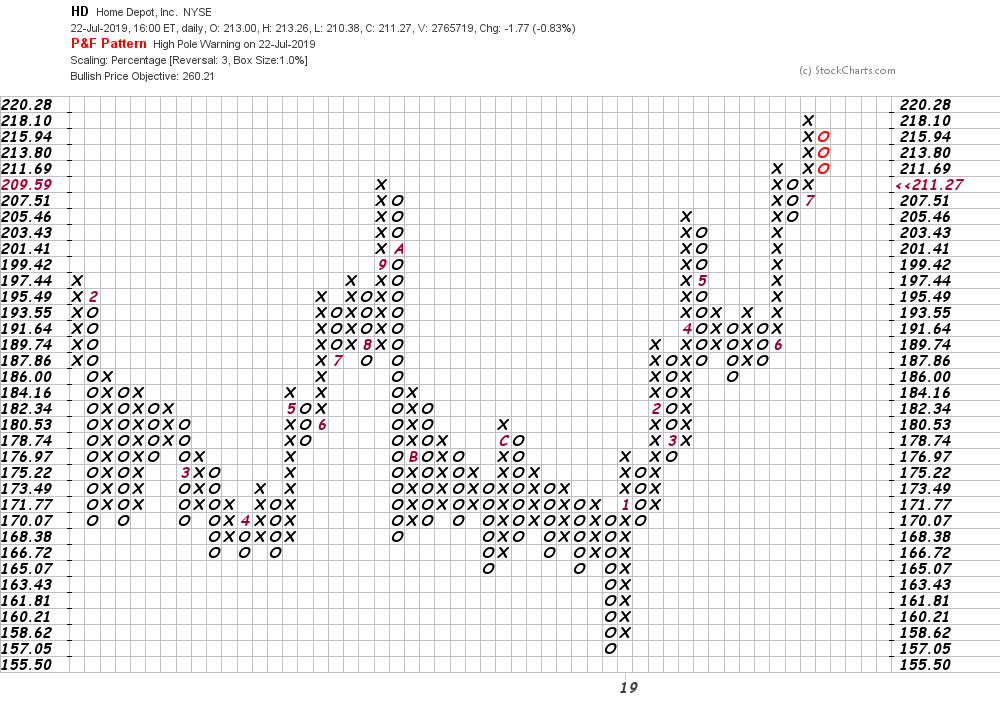 Bottom-line strategy: We have pointed out a couple bearish divergences between the price action and some of the indicators. These clues may not be enough to derail the rally but a decline to $203.43 would weaken the Point and Figure chart.

Get an email alert each time I write an article for Real Money. Click the "+Follow" next to my byline to this article.
TAGS: Investing | Stocks | Technical Analysis | Housing Market | Construction & Engineering | Household Products | Mad Money | Executive Interview | Consumer Products

No Glossing Over It: Our Recommendation on PPG Industries Is Being Stopped Out

The stock of the paint manufacturer is trading lower after a sell-side downgrade.

Let's see what the charts can tell us.

Takeover Interest in Kohl's at a Fever Pitch: Here's My Plan