I'll Tumble For You

Equities, of course are my bread and butter. That said, I'll trade used hub caps if you make a market and we find a way to value them. Equities continue to inch higher, at least large-caps -- not hub caps, and certainly not small-caps. Trading volumes are lower. That has to be expected amid such an odd week. It's not often that investors are presented with a half day, mid-week, followed by a national holiday, that is then followed itself by a full day that will open with some truly critical macro.

You'll know who buckles their chinstraps and tapes on the foil everyday, simply by taking note of who shows up for work this Friday. "Short weeks are always long" is not just an old market adage. The commission guys, and the P/L (Profit/Loss) guys will be at their desks trying to hit a triple this Friday. By triple, I mean earn in three and half days what one normally shoots for in five. There will be pressure on the gunslingers, on a day that the herd has been thinned. It won't be boring.

The charts for the S&P 500, as well as the Nasdaq Composite both showed late Tuesday rallies that landed near the top of the day's range. This would have to be taken as constructive, even on the lighter volume. Alarmingly though, this broad large-cap investment continues to draw dollars away from small-caps and the transports. The economy goes nowhere without these two groups -- and that is what causes concern. My feeble brain can see the logic in a weaker U.S. dollar, or the potential for a weaker U.S. dollar steering investment toward multinationals. That makes some sense. The Russell 2000 stands just a few points above its 50 day simple moving average.

The Dow Transports actually pierced that line from the upside and ended the day barely passing a severe-looking test. Both of these more narrowly focused indices had just taken the 50-day line last week. This test is crucial, as it in some ways represents expectations for economic growth. Treasury markets have already placed their vote. U.S. sovereign debt has been very strong, causing yields to tumble. Very strong.

The Transports did get help from Delta Air Lines (DAL) , as that firm raised Q2 guidance for EPS, free cash flow, and pre-tax margin on soaring passenger traffic, which rose 6.2% in June. Seats filled increased both globally and domestically. Oddly enough, Delta Air owns zero (yes, zero) Boeing (BA) 737-Max aircraft. Hmmm? Away from the fundamentals, check out this setup. 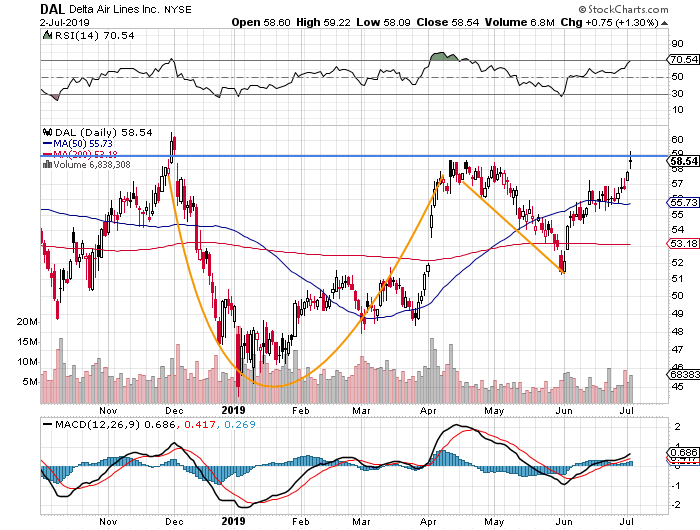 As you can see, DAL now stands to possibly benefit from a four-month cup with a depth of 26% that led to a month-long handle sporting its own depth of 13%. I can't promise you anything, certainly not a rose garden, but this is textbook. If the shares can take and hold the $59 level and oil stays on the cheap side, these shares can see $70. That's my opinion. I don't have a position yet. I may in a little while.

Word comes that President Trump plans to nominate two new names to the Federal Reserve Board, economists Judy Shelton and Christopher Waller. Currently, Waller is already in the system, as Director of Research at the St. Louis Fed. What makes Shelton interesting is that she currently serves as U.S. director at the European Bank for Reconstruction and Development, a role where confirmation by the Senate is required, thus potentially making the partisan blocking of her nomination more difficult.

Why do I like Shelton? She's no wimp. She'll speak her mind. On policy. On the gold standard. On rates. Check out this excerpt from an opinion piece she penned at the Wall Street Journal a couple of months back. "The classical gold standard established an international benchmark for currency values, consistent with free-trade principles, today's arrangements permit governments to manipulate their currencies to gain an export advantage." ... or what the great economics author Jim Rickards refers to as "Currency Wars."

What do I say? Finally, somebody who gets it. By the way, Rickards has a new book that will be available later this month. I gain nothing from telling you this. I tell you this solely because I read his books.

Shelton is also not afraid to criticize the Fed. This, also from the WSJ back in April, may be one of my favorite quotes on policy ever. Check this out: "It is wholly legitimate and entirely prudent to question the infallibility of the Federal Reserve in calibrating the money supply to the needs of the economy. No other government institution had more influence over the creation of money and credit in the lead-up to the devastating 2008 global meltdown. And the Fed's response to the meltdown may have exacerbated the damage by lowering the incentive for banks to fund private-sector growth." Basically, this is what I have been telling you in Market Recon for years, but not in the language of a stick-ball player from Queens.

If one cannot figure out how Shelton's thinking fits with the president's, that is a fair question. Obviously, the environment now is not the environment then. Obviously, there is no electric switch that simply turns on a gold standard. It is good to see a fan of harder currency potentially reach power -- and perhaps soften the Keynesian grip on monetary power that has ruled global decision making for decades now. Shelton did serve as an economic adviser on President Trump's transition team, so it's not like Trump is unfamiliar with her thinking.

Have you heard of Coda Octopus Group (CODA) ? I fell in love at "octopus." What this Orlando area micro-cap (to qualify as a small-cap a firm must run with market capitalization of at least $300 million) does is design and manufacture real-time 3D sonar solutions.

To whom? Well, who would have a need for marine engineering? Certainly, there would be commercial interest. Energy. Construction. Salvage. Conservation. There would also be a need for those working in the fields of underwater security, law enforcement and of course, naval operations. Yes. these guys are defense contractors. 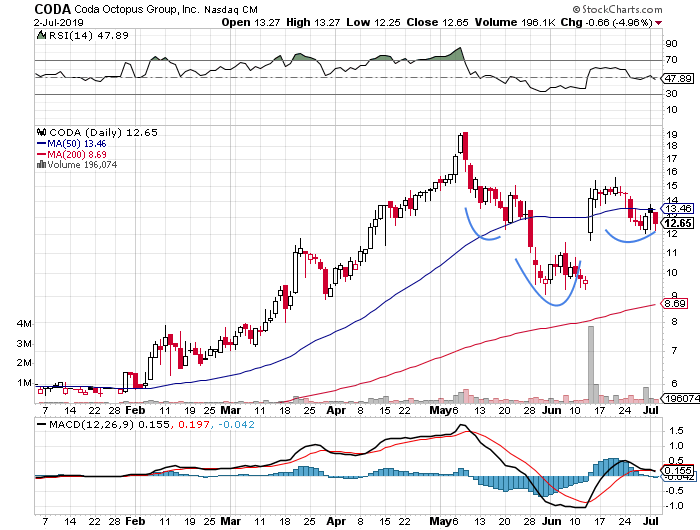 Being such a small firm, these shares are severely under-owned. It has very little fund sponsorship overall. It trades at 14x next year's earnings. Cash on hand significantly outweighs total debt. The current Ratio stands above 7 -- yes, 7. These guys can pay their bills. Think mines in the Gulf of Oman might be a thing? High-tech 3D marine sonar might be a thing too.

Let me show you what I see. It's easy to see recent resistance at the 50-day SMA ($13.46). It's easy to see a rather neutral reading for Relative Strength, as well as a non-committal daily Moving Average Convergence Divergence. My skills in drawing curved lines on my charts leave something to be desired, but I see an "Inverse Head and Shoulders" pattern, I think.

Now, the trick is this, an inverse H&S pattern is bullish for sure, only it has to come after a prior downtrend. The shares peaked in early May. Now, in chronological terms, the time elapsed is not significant. But in percentage terms, a downtrend is certainly present.

It is for this reason -- and the fact that at twelve bucks and change, there is not a whole lot of risk -- that I put on 20% of what I would consider a long position in this name late Tuesday. As you know, I move incrementally on purpose. It leaves the powder dry, in case I get hit in the mush. Personally, I find this one interesting. If it traded under $10, I would place the name in the "Stocks Under $10" portfolio. It's not, so I bought some for myself.

Please note that due to factors including low market capitalization and/or insufficient public float, we consider CODA to be a small-cap stock. You should be aware that such stocks are subject to more risk than stocks of larger companies, including greater volatility, lower liquidity and less publicly available information, and that postings such as this one can have an effect on their stock prices.

Get an email alert each time I write an article for Real Money. Click the "+Follow" next to my byline to this article.
TAGS: Earnings | Economy | Federal Reserve | Indexes | Investing | Markets | Politics | Stocks | U.S. Equity