"Hold on, baby hold on, 'cause it's closer than you think

And you're standing on the brink

Hold on, baby hold on, 'cause there's something on the way

Your tomorrow's not the same as today"

Line in the Sand

The doubts coming into Wednesday morning were mostly technical. Yes, we know. There exists a literal plethora (love that word, the nuns often said that I overused it) of underlying stories that explain or could explain what happened to financial markets over a very rough three days. The technical story, though, was centered around the Nasdaq Composite and the 50-day simple moving average (SMA) for that index, as well as for many key constituent members.

We asked you, the reader, if you thought that, for the index, this line had been pierced or broken. The good news? After Wednesday's enthusiastic-looking rally, the quick answer would be that the line had been pierced, but had indeed held. Indeed, several key individual names bounced off the 50-day line themselves; count Tesla (TSLA) , Amazon (AMZN) and Adobe (ADBE) among them. More on Adobe in a minute or two.

These stocks had to rebound, or I would have had to confirm a change in market direction from uptrend to something else. I prefer "uptrend" -- trading/investing for a living is so much easier with the wind at your back. Notice, however, that I did not use the adjective "confirmed" in front of the word uptrend. That's because I am not really sure that the word would be accurate right now.

All may be fine from here, but I have doubts. I did not like the way equities closed on Wednesday afternoon. It was almost a 30-minute rush for the exits that took some luster off the day's gains. Of course, the president was speaking at the time, and one never knows how the algorithms that lead us around by the nose will react to such events. A keyword here or there and the complexion of an entire session can change.

Keep in mind that U.S. economic growth, and beyond our borders the global economy, remains stunted. It appears certain, at least for now, that until the election is over that our legislators will not cooperate further. Shame on both sides. That hurts U.S. businesses and households, and speaking of the election itself....

Markets seem to me to be starting to understand that we will not know who won at the top of the ticket, and maybe not even down-ticket, for quite a while once polling comes to a halt on Nov. 3. The results will likely be criticized, and possibly be contested. A fight over power will be ugly.

The Federal Reserve can do all it wants. The Fed can spin plates and juggle bowling pins, but the Fed will not be able to stop the marketplace from reacting badly to such events. The same Fed will announce on Sept. 16 that there will be no increase in short-term interest rates until either the cows come home or consumer-level inflation rises above 2% and stays there, seemingly for good. It may put this in writing (sans the cows).

In the end, the virus is in charge, until it is not. The virus impacts conditions of surplus and scarcity as well as human reaction and interaction. Simplified, the virus controls demand, supply, and maybe even the willingness to vote. You can trade this market.... if you can embrace volatility.

Sure was nice to see. All 11 sectors closed in the green. Even Energy. Despite the weak close. Information Technology roared back from the hole that the sector had fallen into, led by hardware, software and the semiconductors across the board. Go Qorvo (QRVO) , which also means go Qualcomm (QCOM) , and go Apple (AAPL) . Winners clobbered losers and advancing volume easily outdistanced declining volume at both of New York's primary equity exchanges. One thing that stuck out, though, was this: Trading volume declined on Wednesday from Tuesday at both the New York Stock Exchange and the Nasdaq Market Site.

In fact, trading volume in aggregate across only constituent members of the Nasdaq Composite or the S&P 500 ended the day lower than it had on each of the three days prior (all down days) individually. In other words, some money went back to work, but managers were not as convinced as maybe they appeared. Alongside that rally, the yield curve steepened, albeit mildly, and the dollar cooled a bit, which gave a boost to both gold and oil. Wednesday was a positive, but there needs to be follow through before the high-fivers can celebrate.

On that note, word is that the NFL will open its season here on Thursday night. I will be asleep way before halftime. The NFL is Jim's turf. I am a baseball guy. The Yankees won last night for a change and actually got an assist from the Mets. Go figure. I root for the academies in American football. Bet you knew that.

No play for Mr. Gray? There were so many individual stock stories that impacted the markets on Wednesday that maybe the companies themselves -- of course with algorithmic help -- pushed the averages higher. One story of interest that did not was Kansas City Southern (KSU) . That name not only underperformed the Industrials as a sector, it also badly underperformed the rest of its own industry names (railroads).

Kansas City Southern rejected a group of investors who reportedly had offered roughly $2 billion, or about $208 per share, for the company. The folks at KSU (stock closed at $185.47 on Wednesday with a market cap of $17.5 billion) feel that such a bid undervalues the company. The Wall Street Journal reports that the two sides are not currently in discussion. This stock will likely sell off just a bit on Thursday unless the previous sentence changes. The algos will tell you before you can read the news. Maybe on a deep enough discount? Maybe.

Much to My Dismay

OK, not really dismay. I trade around my own mistakes all the time. Until about three seconds (minutes) ago, I was sure that I was long Adobe (ADBE) . As a professional trader, I often leave bids and offers well below or well above the last sale in certain often-traded names if I need to step away from the desk. I had to see a new doctor on Wednesday afternoon, and actually got what I considered to be some positive news. I was more interested in talking to my wife than in checking my book upon my return. I did check my P/L last night, but not for individual trades until this morning.

Apparently, I am flat Adobe, which I think unfortunate. The name reports next Tuesday and I think I want to be long going into the numbers. You may have noticed -- then again, you may not have noticed -- that two very highly rated analysts went public with some stock-specific optimism on ADBE on Wednesday. Brent Thrill of Jefferies maintained a "Buy" rating while raising his price target from $470 to $570. Not to be outdone, Saket Kalia of Barclays reiterated his "Outperform" rating while taking his price target from $450 to $530. 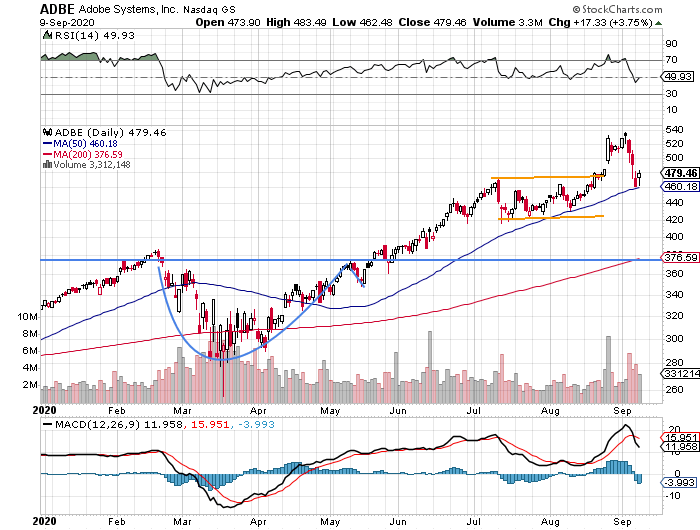 See the bounce off the 50-day line? That was certainly not unique to Adobe on Wednesday. Being my lack of a long position was an accident, I will need to buy these back. Futures markets trading at zero dark-thirty suggest potential for a discount, which I would certainly welcome. My price target is actually higher than either of the two "five stars" mentioned above. I am looking for $580 ultimately. I panic at $440.

There was some defense-related news on Wednesday, actually late Tuesday for specificity. The U.S. Air Force awarded an initial $13.3 billion contract to Northrop Grumman (NOC) for the Ground Based Strategic Deterrent, a program likely to total somewhere between $85 billion and $100 billion once all is said and done.

There really was no competition for the award for two reasons. One, Boeing (BA) dropped out of the competition last year, and everyone else who is anyone in defense at least at the headline level is lined up as a subcontractor.

The effort here is to modernize the nuclear triad, and deterrence only gets more vital as time progresses. What's a nuclear triad? Simple. The ability to deliver via air, land or sea. Among those subcontractors set up to benefit include longtime Sarge faves Lockheed Martin (LMT) , Raytheon Technologies (RTX) , L3Harris (LHX) and Honeywell (HON) , a name I had held in size until last week and will likely buy at least half of back down here at these prices. I like Honeywell; that was just business.

Get an email alert each time I write an article for Real Money. Click the "+Follow" next to my byline to this article.
TAGS: Mergers and Acquisitions | Investing | Stocks | Defense | Software & Services | Transportation | Real Money

So now what? The usual folks are already talking about whether or not this is a bottom.

Let's check to see if these gains by the biotech can be sustained.

Netflix Gets an Upgrade, But I Won't Be Running Up That Hill

The shares have traded sideways the past two months.

Near-term downtrends should be respected.