All the major equity indexes closed higher Thursday with positive internals on the New York Stock Exchange and Nasdaq as trading volumes shrank from the prior day's session, with all closing at or near their intraday highs.

All the charts are currently in near-term uptrends. However, several are at significant levels of high-volume resistance that may result in some sideways action or consolidations of the recent rally's gains. In addition, some bearish stochastic crossovers on the charts and other elements signal valuation has become stretched as forward 12-month earnings estimates continue to recede and add to the mix of factors suggesting some pause or consolidation is becoming more likely over the near term.

All the major equity indexes closed higher Thursday with positive NYSE and Nasdaq internals on lower volume as all closed near their intraday highs, leaving all the near-term uptrends intact.

However, the S&P 500, Dow Jones Industrial Average, Dow Jones Transportation Average, S&P 400 Midcap Index, Russell 2000 Index and Value Line Arithmetic Index are all very close to high-volume resistance levels of approximately 10 months in length. Typically, such levels can prove problematic for an unknown period of time before being resolved to the upside.

While the cumulative advance/decline lines for the All Exchange, NYSE and Nasdaq remain healthy, the Nasdaq Composite, Nasdaq 100 and Dow Transports (chart below) all flashed bearish stochastic crossover signals at the close. 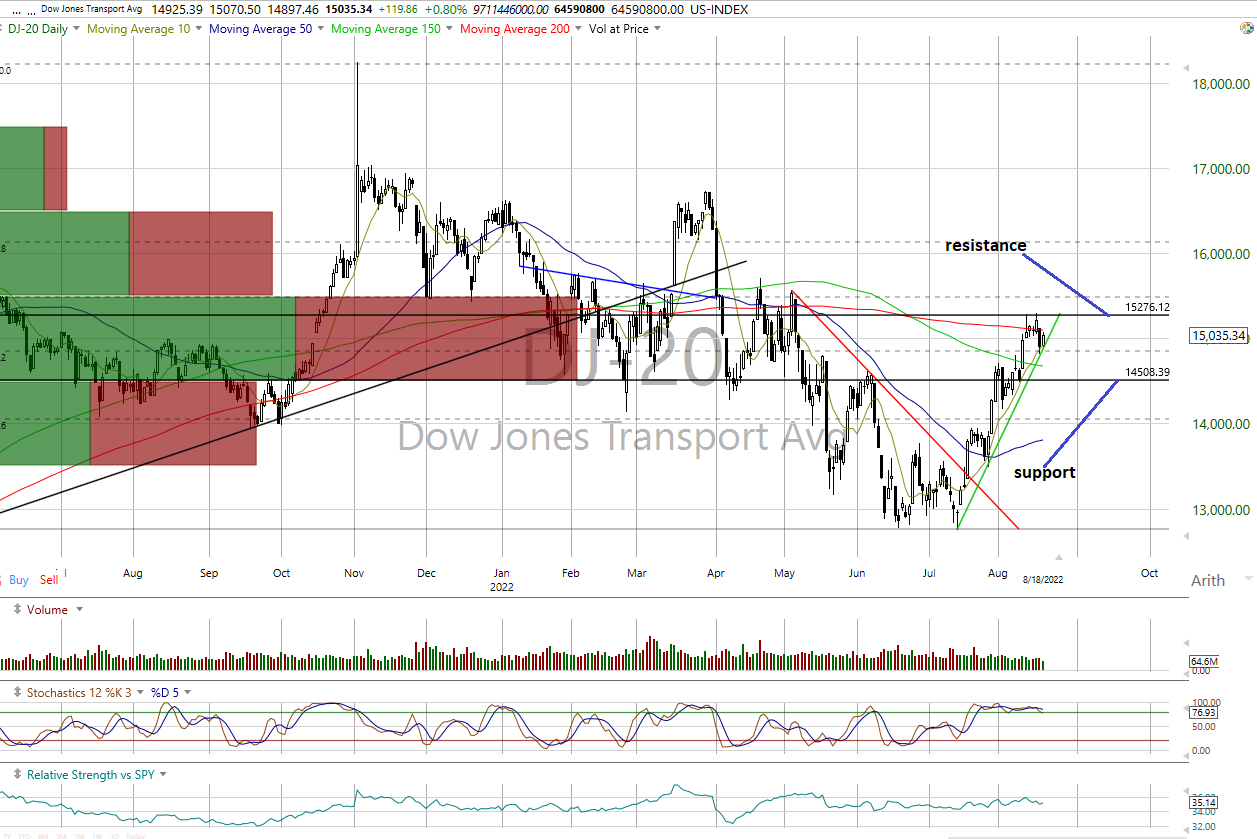 However, the percentage of S&P 500 issues trading above their 50-day moving averages (contrarian indicator) remains in bearish territory at 92%. We reiterate, as a point of reference, that it was around 13% at the June market lows.

The Open Insider Buy/Sell Ratio rose to 35.0 but remains neutral.

The detrended Rydex Ratio (contrarian indicator) ticked up to -0.08 and is neutral as well.

The Investors Intelligence Bear/Bull Ratio (contrary indicator) also moderated with the number of bears dropping and bulls increasing at 27.8/44.4. Its three-week moving average remains bullish at 83.79.

The forward 12-month consensus earnings estimate from Bloomberg for the S&P 500 dropped yet again to $233.00. The valuation spread remains rather wide, with the S&P 500 forward multiple at 18.4 and at a premium to the "rule of 20" ballpark fair value at 17.1.

The 10-year Treasury yield closed lower at 2.89% and still is within its trading range with support at 2.72% and resistance at 2.91%. However, it is trading above resistance here on Friday morning at 2.94%.

While the near-term charts and market breadth remain positive and lack sell signals, we believe some clouds are starting to appear given valuation, %50 level and bearish stochastic crossovers as the indexes are now battling what we perceive as difficult high-volume resistance levels that may require multiple attempts before being overcome.