Ever try to set a new personal record? I try constantly. Not easy. Not one bit.

I have been chasing my personal best in the mile for close to 40 years now. No longer even close. Every time I even come within sniffing distance of my best on the bench, my left shoulder tells me that I better just re-rack the weight and not try again for a while. Honestly, I sometimes do have to wonder if there is some truth to this whole aging thing. Perhaps the trick may be in trying new sports or exercises that one never attempted in one's youth. Therefore, best effort ends up being personal best, by default.

The S&P 500 tried a new trick on Monday: 2943. A new all-time-high closing level.... and that close came amid intraday weakness that had persisted over the last 90 minutes of the session. One item that I have noted as pervasive in the recent past was certainly glaringly obvious on Monday. That was the lack of volume.

S&P 500 volume printed in full-day decline from the session prior. That's the fourth session in a row. Is that really all that unusual?

No. Slow Mondays are not unusual. Slow every days at the top of the chart during the two busiest weeks of earnings season? That might tell us something. The question is not "Are the institutions participating less?" The question is "Why aren't they?"

A lack of a willingness to put more money to work at this top, combined with a refusal to sell en masse? Makes sense. I mean, though nearly every stray cat in the neighborhood has mentioned the possibility of a "sell the news" event should a trade deal with China ultimately be agreed to, not one among us wants to be ahead of that curve. No one relishes the thought of standing in the corner wearing the dunce cap -- at least not by themselves.

For now, the volatility will remain name-specific and married to earnings-related news. The broader trend, more so than on hopium around a trade deal, still walks hand in hand with the Federal Reserve's perception of economic health and how to proceed without screwing that up while understanding that domestic and global fiscal policies are not sustainable.

So... slow until Wednesday afternoon? That's if we have a sloppy press conference. If not, slow through April jobs on Friday.

Not Exactly an Iceberg

That said, there are certainly icebergs visible in the soft glow of twilight. Those who keep a close eye on the Chinese economy, which should be all of us by now, kept one eye on Asian markets, one eye on a bevy of Chinese PMI surveys for April, and maybe one ear on the ballgame of one's choice.

First, the China Federation of Logistics & Purchasing (the Chinese government) went to the tape with disappointing results for both its manufacturing and non-manufacturing surveys. Then, the Caixin survey (data supplied by Markit) confirmed what many had feared -- namely, the possibly the robust data for March experienced across the Chinese economy had been a short-lived response to stimulus ahead of the Lunar New Year, and that this just may be a tough year after all for that economy, and for the demand created by that economy for the short- to medium-term future.

Meaningful? Likely. The keys here are the decreased activity across New Orders and inventory building. Does the People's Bank of China (PBOC) simply turn the liquidity machine back on? Does the government on both federal and local levels simply start building again regardless of organic domestic demand? If it gets bad enough, I would think yes, that ultimately they would.

We are not quite there. While we wait two weeks for the next big release date for Chinese macro (Retail Sales, industrial Production, Fixed-Asset Investment, Unemployment), it was nice to see a better-than-expected (though still quite pitiful) first-quarter GDP flash coming out of the Eurozone here on Tuesday morning.

Two economists that you probably need to be following have penned a couple pieces that citizens need to understand. David Andolfatto of the St. Louis Fed and Jane Ihrig of the Federal Reserve Board of Governors have co-authored an idea that needs to be studied in full, and in far more depth than space allows in a morning market note. The links are here and here.

While in theory this swap would seem harmless, I am just not sure how harmless it may be in actual function. True, the Fed does need to continue to work toward balance sheet reduction, even if at a lesser pace than originally envisioned. I need to go over this idea a bit more, but one thing keeps screaming at me from my darkened window.

While forced high levels of reserves certainly have been a drag on valuations across the financial sector, you have witnessed each and every CEO in representation of that industry tell Congress that the banking system is as strong as it has been in eons. Why, then, would bankers exchange reserves meant to be there in times of duress for debt securities that obviously would be subject to market risk (not to mention far less liquid) at a time and place where this inventory is potentially near the top of its historical price range? This, while knowing full well that if growth and inflation ever dance to the same tune that the central bank would prefer to tighten the environment for interest rates.

You know, I may not be as fancy educated as are some of these cats, but I've been around the block a few times. I'll go over this idea again. Right now, I am not sure this passes the smell test. What does that mean? Perhaps it means that they'll probably give it a go even if I don't like it.

So many stocks are in the crosshairs here on Tuesday, both in the morning and the evening. By now you've already heard from several. Tonight's focus obviously will be Apple Inc. (AAPL) , but there also will be a focus on Advanced Micro Devices Inc. (AMD) , and superstar CEO Lisa Su. Just how much of Intel Corp.'s (INTC) lunch did AMD steal? How about rising cloud communications star Twilio Inc. (TWLO) ? The industry seems to think that the time for profit is now.

For now let's do Apple, which is a holding of Jim Cramer's Action Alerts PLUS charitable trust.

Once a year, we hear about Apple's cash pile and about how aggressively it wants to return some of that dough to shareholders. As of the end of 2018, that "pile" still stood at $130 billion. I think it's likely that Apple authorizes both an increase to -- though far more modest than announced last year -- the share repurchase program and maybe even the dividend. The current yield there stands at 1.43%.

Our industry looks for fiscal second-quarter earnings per share of $2.36 on revenue of $57.44 billion. If realized, this would be a 15% year-over-year earnings decline on a sales decline of 6%. That may not be the focus. Why do I say that? I am a shareholder. I'll tell you what I am looking for. I want to hear numbers for....

1) iPhone sales (expecting > $31B)... managing the decline of the biggest dog in the house.

3) Apple Watch & accessories (expected > or = to $4.8B) Why the Watch? It just may be the key to unlocking healthcare-related revenues down the road.

1) iPad sales or Mac sales as long as combined the two line items approach $10B.

Want to hear mention of revenue expectations (and perhaps timelines) for.....

2) The new credit card to launch in cooperation with Goldman Sachs GS. 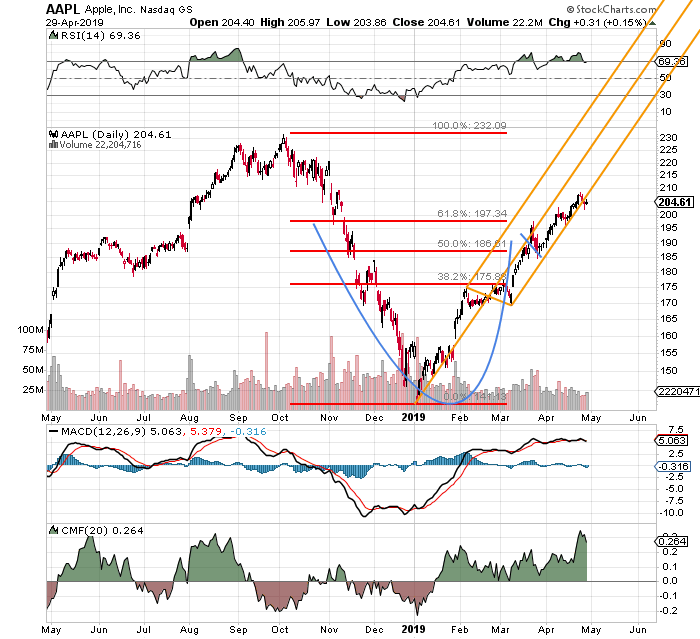 This is a continuation of a chart that I threw at you a few weeks ago, when I raised my price target for AAPL from $197 to $240. One can see very recent weakness in the share price ahead of earnings. I actually find this more comforting than if the shares had just kept running. With my Pitchfork model, admittedly sloped at an unrealistic angle, Apple now has come under pressure with the daily moving average convergence divergence (MACD) emitting a sell signal and Relative Strength sending an overt message of being technically overbought for a rough period of six weeks.

The fact is that for these shares to truly break out the recent top of $207 has to be taken and held on a re-test. It is only then that we see the move that I have been waiting for. My current net-basis for this name is $157. My game-plan is this....