By BRUCE KAMICH Aug 26, 2019 | 09:01 AM EDT
Stocks quotes in this article: HPE
Followers of Hewlett Packard Enterprise Co. ( HPE) are waiting for the company's latest earnings report, which is slated for Tuesday, so let's check out the charts and indicators in advance of the release.
In this daily bar chart of HPE, below, we can see that the stock price of HPE has been under pressure the past 12 months. Prices are close to a test and perhaps a break of the late December low. HPE is trading below the declining 50-day moving average line and the weak 200-day line. The pattern of volume this year has been pretty uneven but the On-Balance-Volume (OBV) line shows a decline from April, which tells us that sellers of HPE have been more aggressive for months. Trading volume has been heavier on days when HPE has closed lower and suggests that investors are anxious sellers. The Moving Average Convergence Divergence (MACD) oscillator has crossed to the upside for a cover shorts buy signal.

In this weekly bar chart of HPE, below, we can see that the $13-$12 area has provided support the past three years. A break of this zone indicates a significant decline could materialize in the months ahead. Prices are below the declining 40-week moving average line. The weekly OBV line is pointed down and the MACD oscillator is bearish.

In this Point and Figure chart of HPE, below, we can see a relatively nearby downside price target of $12.37. This is not a big decline, but it could precipitate further weakness. The next lower Point and Figure target would be $10.93 using a weekly chart (not shown). 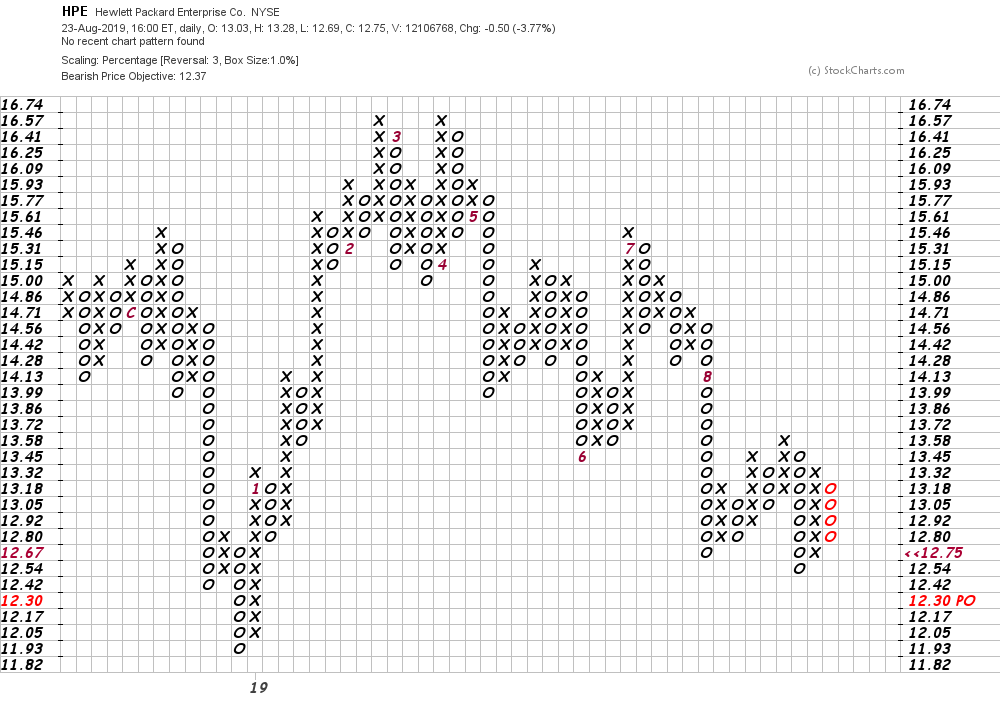 Bottom line strategy: Because prices have been in a decline from late February I am not optimistic about the earnings numbers this week. We could always get a reflex bounce, but I think the risk is on the downside.
Get an email alert each time I write an article for Real Money. Click the "+Follow" next to my byline to this article.
TAGS: Investing | Stocks | Technical Analysis | Software & Services | Technology | Technology Hardware & Equipment | Real Money | Earnings Preview