The good news is that Friday's decline did what it was supposed to do and it took the Invesco QQQ (QQQ) down to tag that line that we've looked at so often in the last month or so. I think we might even see some follow through on that rally that began intraday in those stocks.

What I think we need to understand, though, is that the bounce off the line confirms that this is a very good line. That means, should this line break it would be considered a big deal.

Before we get to why it might break, let's finish up the good news, or at least the reasoning why we could see a bounce early this week. For the first time in a month the put/call ratio went up to show a bit of fear creeping in. I have plotted the daily readings for the put/call ratio (red) with the S&P (black), so you can see that lately as soon as it rises, the pullback in the S&P is over. Sometimes the rally off of it lasts and sometimes it doesn't, but it shows the change in sentiment during the latter part of the week.

Poll Results. Thanks to all who voted, couldn't do it without you.
FYI last week the numbers were reversed with 54 up and 46 down pic.twitter.com/nv4dH5qLhi

Now, let's talk about the bad news. Breadth, when using common stocks only, refuses to confirm the upside. That is a negative divergence.

That also means the McClellan Summation Index, while it has lifted recently is lagging. It won't take much to turn it back up, but there should be a lot more cushion at this point in the market.

Then there is sentiment of an intermediate-term variety. The one day put/call ratio might be leaning high but the 10-day moving average has just curled up which is usually associated with market correction (in June it led to a 7% correction in the S&P).

The 21-day moving average of the exchange-traded fund put/call ratio has sunk farther, although it has not reached the same extreme as January 2018 or February this year, but it surely does not show any fear in the market. 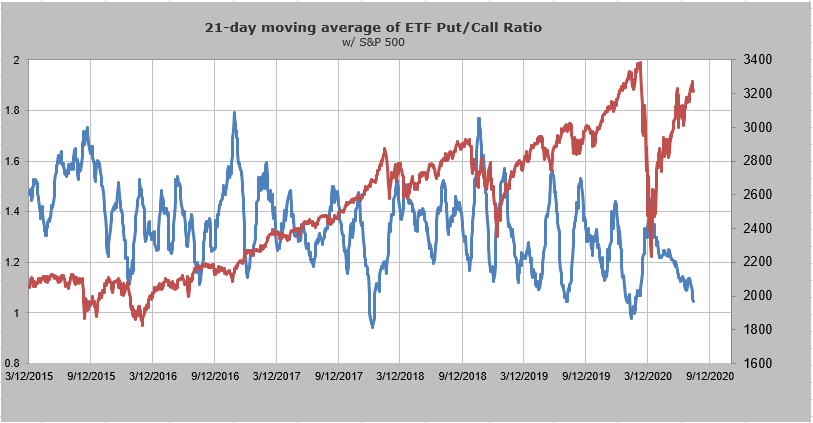 The biggest change this week comes from the Insider Sales Ratio. For months I have heard about all the insider selling and it never showed up in the chart (courtesy of Barron's) until this past week. And now it is extreme. Do not try and line it up with a move in the market; sometimes it matches perfectly (see March) and sometimes it doesn't (see December). But know that insider selling is not bullish, even if it takes a month or so to matter.

Finally the National Association of Active Investment Managers (NAAIM) surveys their members each week on their exposure to the market. This is actual allocation, not just a bull or bear survey. You can see how extreme it is now, the same as it was in late December 2019 and September 2018. 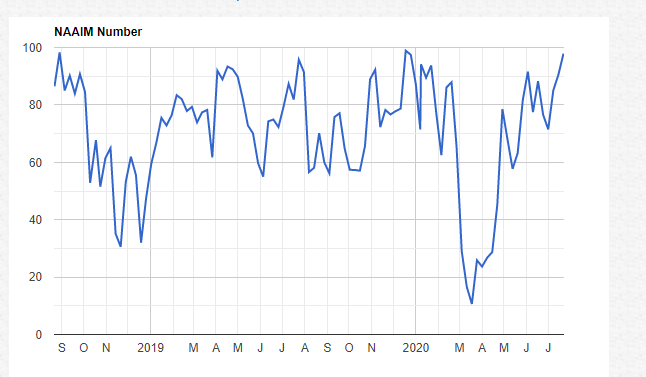 I would not be surprised to see a rally in the early part of the week, but I think the intermediate-term indicators say caution is warranted over the course of the next month or so. And if the QQQs break that line it will be confirmation.