For his second "Executive Decision" segment of the Tuesday night Mad Money program, Jim Cramer spoke with Calvin McDonald, CEO of Lululemon Athletica (LULU) , the athletic apparel maker with direct-to-consumer sales that now account for 43% of their business.

McDonald said he's excited for Lulu's future and the company is still in the early innings of their growth. He noted that they had a lot of momentum going into 2020 and once the pandemic hit, it only accelerated the trend toward a more active lifestyle and the desire for versatile apparel.

In the daily bar chart of LULU, below, we can see that the shares just about tripled from March to early September -- a fantastic return. LULU has been correcting that huge rally since early September but higher lows from September to November to now in the middle of December suggest buyers are being more aggressive. LULU has been trading above and below the 50-day moving average line but always above the rising 200-day moving average line.

The On-Balance-Volume (OBV) line peaked with prices in early September and has been moving sideways suggesting that buyers and sellers of LULU are more in balance. The Moving Average Convergence Divergence (MACD) oscillator is currently above the zero line and poised to turn up or down.

In the weekly bar chart of LULU, below, we can see that the shares have been in a major uptrend the past three years. We can see two tests/breaks of the rising 40-week moving average line. Price got a bit extended above the 40-week line in August and we can see a sideways correction unfolding.

The weekly OBV line shows a long-term rise but with a sideways trend since August. The MACD oscillator crossed to the downside in early September for a take profits sell signal. The oscillator has narrowed and could turn upward for a new buy signal depending on the price action going forward.

In the weekly Japanese candlestick chart of LULU, below, we can see some upper shadows above $375 but also some lower shadows in early November. Not sure who is getting the upper hand.

In this daily Point and Figure chart of LULU, below, we can see a potential price target in the $437 area. A trade at $321.50 may weaken this chart. 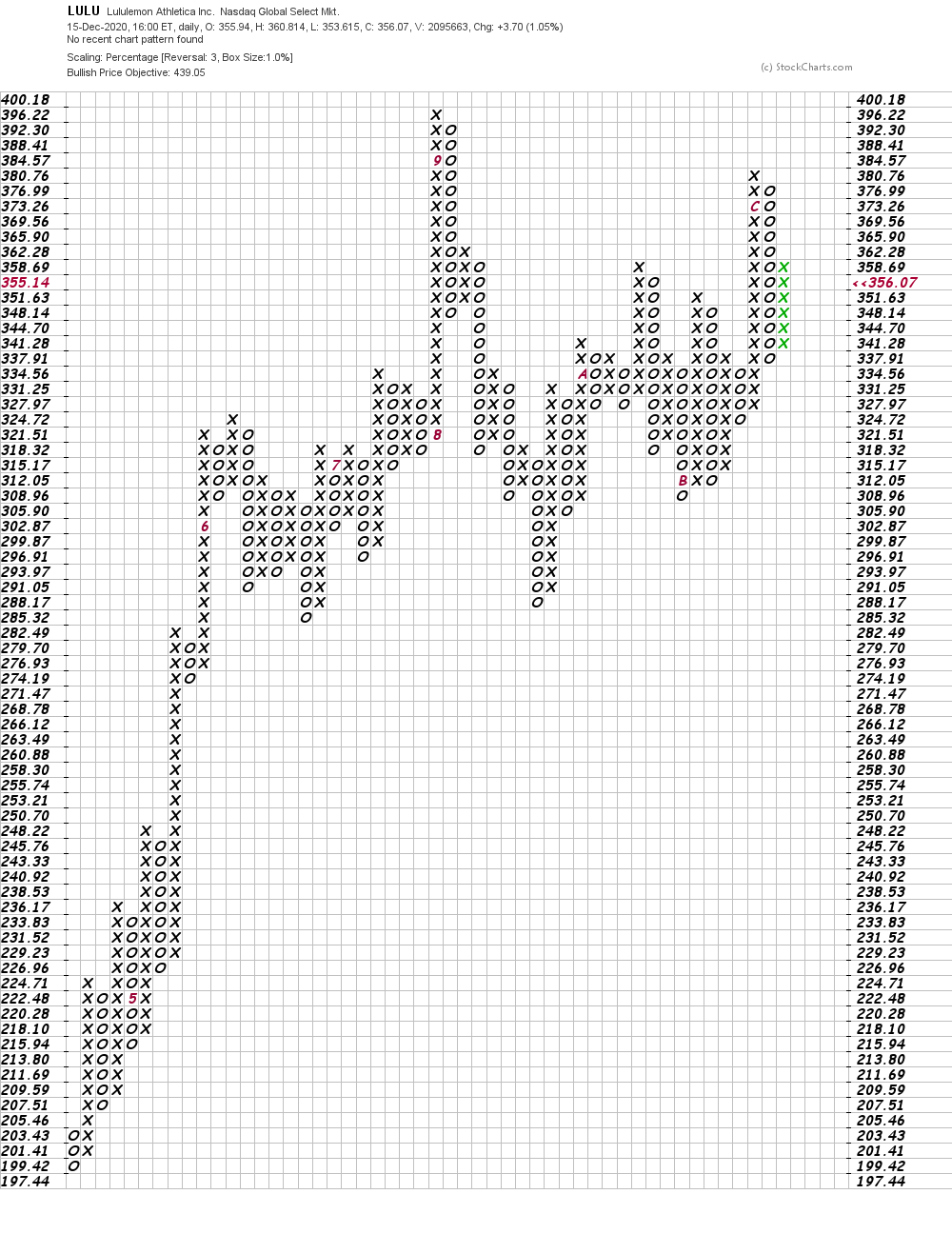 Bottom-line strategy: I have underestimated the enduring strength in LULU a number of times in the years I have written for Real Money. I haven't fouled out yet but I haven't been that good. Currently it looks like LULU may trade sideways a bit longer but with the major trend being up. I would look for an upside breakout in the months ahead.

Existing longs and new buyers should consider a sell stop at $310 as weakness below there would suggest a deeper decline, in my opinion.

Get an email alert each time I write an article for Real Money. Click the "+Follow" next to my byline to this article.
TAGS: Investing | Stocks | Technical Analysis | Apparel | Personal Products | Mad Money | Executive Interview | Consumer Discretionary