You know that old expression about being careful what you wish for, because you might just get it?

Well, I find myself in that position.

Just two days ago, I drew in a pattern on the charts of Russell exchange-traded fund (IWM) and the oil services ETF (OIH) . Essentially, I was wondering out loud if they could come back down and give us some sort of a head-and-shoulders bottom. It was a tiny head-and-shoulders bottom, but it's the pattern I saw. I even noted that to be symmetrical IWM had a gap to fill around $220.

And now here we are with the pattern I drew in coming to fruition. Well, to be fair, it would only come to fruition if it stops around $219 and then turns back up. That's the plan. Will it work? That's the question.

Using my own Overbought/Oversold Oscillator, we're not yet overbought. But we are no longer oversold. Remember the input for this indicator is the 10 day moving average of the net of the advance/decline line. In the next four trading days this indicator will drop the following:

What this means is that -- let's use Friday as an example -- breadth on the New York Stock Exchange would have to be worse than negative 2,388 for the Oscillator to go lower. And what if breadth is positive by a mere positive 500? The Oscillator will shoot right up, because if you replace negative 2,388 with 500 you gain a lot of points, don't you? So that's how I'm looking at the Oscillator.

Then there are the number of stocks making new lows. As recently as Monday, Nasdaq had 650 new lows. During Thursday's rout there were 89. This is not to say that we can't see it begin to ramp upward again, but as of now it hasn't happened.

Sentiment, as I noted yesterday began to turn with folks providing a lot of happy chatter. That all retreated on Thursday and the put/call ratio notched back up to .91. The equity put/call ratio has been trending back into the 40s this week, so let's look at the 10-day moving average of this indicator. It has finally reached back to the highs and is now rolling over. This is what typically happens before a rally. 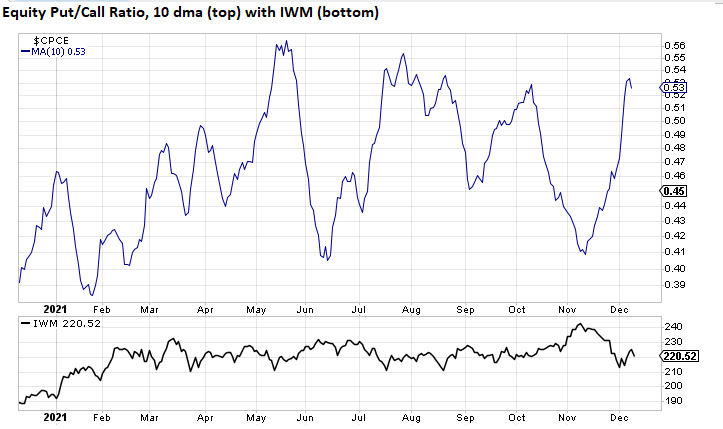 I was duly shocked to see the National Association of Active Investment Managers (NAAIM) did not get more bullish, but rather pulled their horns in further with a reading of 69 on their exposure. As a reminder, the reading was 55 at the September low. 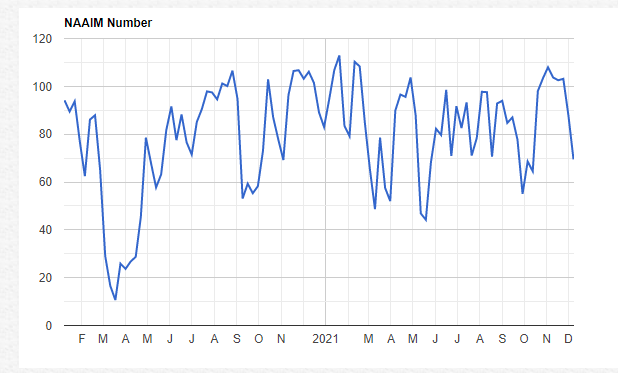 It's not all rosy, as you know. The cumulative advance/decline line for the NYSE is lagging far below the S&P, which is a negative divergence. But for now the market is mapping out as I thought it might, so now I will have to see if the market wants to prove me wrong when I say I think we should rally one more time before midweek next week. 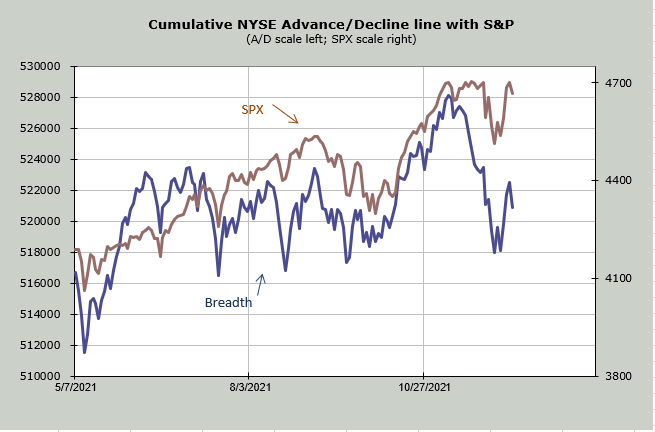