I have written on business conditions for both FedEx (FDX) , which reports Thursday afternoon, and United Parcel Service (UPS) , a name that I am long often enough this season. I chose UPS, but had made known my feeling that either one of these delivery services giants should do well as the expectation of much higher demand for what they do creates opportunity for pricing power that then results in higher margins.

To my surprise, and I am surprised, neither one of these two stocks has performed all that well as the holidays, now a largely e-commerce event, run smack dab into the first rollouts of the Covid-19 vaccine by Pfizer (PFE) and very soon Moderna (MRNA) , it is hoped, then others.

FedEx and UPS have roughly split up the 600 or so sites that have received or will receive the Pfizer vaccine by sometime here on Wednesday. They are coordinating with each other and with the U.S. Army as well as McKesson (MCK) and pharmacy giants CVS Health (CVS) and Walgreens Boots Alliance (WBA) on getting vaccines where they need to go. FedEx and UPS also work for and compete against Amazon.com (AMZN) for the e-commerce delivery dollar. There, FedEx and UPS also are relied upon by the likes of Walmart (WMT) , Target (TGT) and Costco (COST) as well as many others for that last-mile delivery, that last mile being the lowest margin mile as any package moves from seller to consumer.

In order to compete better and to get through this period of intense demand as well as possible, FedEx and UPS have had to be upfront with sellers and buyers alike in terms of deadlines if one wants packages to get somewhere by Dec. 25. They have had to become far more efficient as Amazon kept large portions of the business in-house, pressuring margins at the time.

FedEx will report its fiscal second quarter this week, which will not reflect this season of demand. UPS will report its fourth quarter late in January. That's a long way out, but that's when we'll know for sure how well this period has been handled. Other than that, we are going to need to listen to the FedEx conference call Thursday night as it may tell us about more than its quarterly performance.

Readers may have noticed last Friday that Deutsche Bank added UPS to its catalyst call buy idea list based on confidence in UPS's involvement in "Operation Warp Speed." The bank sees great potential for an upside fourth-quarter beat. UBS, at almost the same time, sees FDX as the more bullish play of the two based more on valuation.

I'll tell you what, UBS is right about one thing. UPS trades at a higher multiple than FDX. In my opinion, a higher valuation is called for. UPS tops FDX significantly when it comes to operating margin, operating cash flow, leveraged cash flow and dividend yield. I don't think FDX is a poor stock to own. I just own UPS, which also is a holding of Jim Cramer's Action Alerts PLUS charitable trust, because I think it is the better of the two.

That's my opinion, but I have an even stronger opinion. That is, that well-diversified portfolios need to own at least one of the two through the winter months. Oh, I know that I have mentioned this before. UPS is run these days by CEO Carol Tome. Ring a bell? Make a lot of money this past decade or so holding on to shares of Home Depot (HD) ? Yeah, that Carol Tome. Think Home Depot has been well-run and well-focused over the years? That brain is now running UPS. 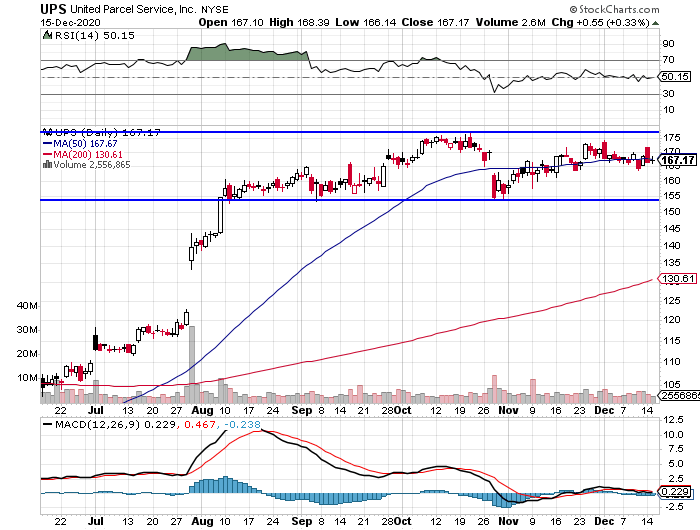 As some readers will note, these shares have gone sideways since I wrote a piece on UPS back in November. The top and bottom of an almost five-month period of consolidation not only have not moved, they have not been tested of late. Both the daily moving average convergence divergence (MACD) and the stock's Relative Strength Index (RSI) could not possibly seem less committed.I see only the 50- day simple moving average (SMA) right now as a technical catalyst. The stock has straddled that line for six weeks.

I see additions to UPS long positions as advantageous down around the $164 level as there does seem to be a gravitational pull toward the line. Managers either will pile into this name on a take-and-hold at $178 or run for the hills on a break-and-hold of $155. In addition to adding in the low to mid $160s I see myself jumping on board on momentum at the top of the range and panicking at the bottom. That's what the algos will do, and unfortunately in the year 2020 they run the game, so we must game them.

(UPS is a holding in Jim Cramer's Action Alerts PLUS member club. Want to be alerted before Jim Cramer buys or sells these stocks? Learn more now.)

Get an email alert each time I write an article for Real Money. Click the "+Follow" next to my byline to this article.
TAGS: Fundamental Analysis | Investing | Stocks | Technical Analysis | Transportation | E-Commerce | Real Money | Earnings Preview