Note: Meisler's next column will be Sept. 7.

It never ceases to amaze me when a market is ready to rally -- and folks ask, What can possibly make it rally? -- somehow some news comes along to give folks enough hope to rally. The inverse is true, too. When the market is due for a pullback and we've been rallying hard, folks wonder what can possibly take us lower. Yet, somehow, something always comes along to spur the move. Keep in mind that if we knew the news in advance, it would already be priced in.

The market was due a pullback.

Now both of those short-term indicators have backed off. It's not as though they have backed off enough for the runway to be incredibly long, but Nasdaq is back at 83 and the S&P is at 79. So at least the decline served the purpose of taking those down off the boil.

I would also note that I continue to focus on the number of stocks making new lows. Nasdaq's new lows did not expand on Thursday. We will get concerned should they begin to rise up over that 100-plus mark again. 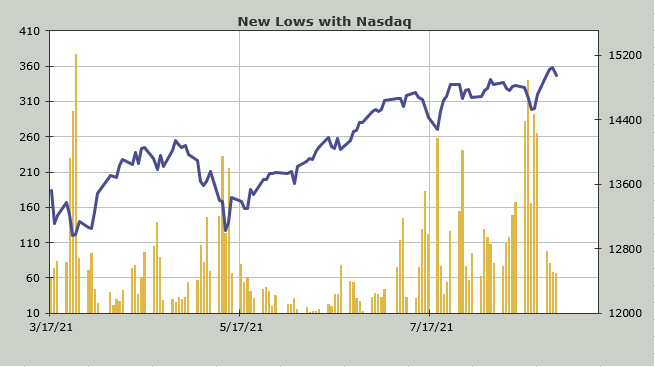 What continues to be concerning is the overall breadth of the market. We had a few good days, but even with that the McClellan Summation Index has halted the attempted turn upward. The fact that this breadth indicator cannot turn upward and maintain any sort of lift is overall problematic for the market.

I still believe that this pullback should lead to another attempt at a rally next week. We will be back to a short-term overbought condition as we head toward Labor Day weekend. Notice the Overbought/Oversold Oscillators haven't even managed to get over the zero-line yet. I think that should happen next week.

Two days ago the equity put/call ratio chimed in at just under .40 at .39. As we have seen throughout this year readings under .40 have produced pullbacks, which is what we had on Thursday.

In the meantime, the 10-day moving average of the equity put/call ratio is still heading down.

If I am correct and we rally again next week I would expect this to continue falling. And should it fall near the bottom of the page as we get closer to Labor Day, and thus closer to an overbought condition, I would once again look for the market to pullback post Labor Day.