By STEPHEN GUILFOYLE Jan 18, 2023 | 12:29 PM EST
Stocks quotes in this article: PLD
San Francisco-based Prologis ( PLD)  is a global real estate investment trust (REIT) that acquires, develops, and operates industrial properties throughout the Americas, Europe and Asia.
The REIT released its fourth-quarter results on Wednesday morning, reported GAAP earnings of $0.63 per share, down from $1.67 for the year-ago period, but easily beating the consensus view.
Core funds for operations (Core FFO) per diluted share for the fourth quarter came to $1.24, which included $0.02 of net promote income. This compares to $1.12 for the year-ago comp, and beat Wall Street expectations by about three cents.
Revenue generation for the period ended December 31 printed at $1.752B, which exceeded estimates and was good enough for year-over-year growth of 36.7%. For the quarter, occupancy averaged 98%, while the Prologis' retention rate was 82.4%.
CEO Hamid R. Moghadam commented in the press release: "Our results underscore the strength of our business in the face of a slowing economy. While capital markets have begun to stabilize, it will likely take a few quarters before we see meaningful price discovery, and normalization of values. Despite the challenging economic environment, we are focused on serving our customers through the scale and quality of our portfolio, our growing Essentials offerings, and dedication of the best team in the business."

Prologis ended the period with total assets of $87.897B, which was up huge over three months as the entry for operating properties moved up to $69.039B. This brought net investments in real estate up to $82.817B. Other assets total just $4.801B including only $278.5M in cash.
Liabilities come to $30.034B, including $23.876B in debt. The debt-load is up more than $5B over three months.
All in all, on the surface, the balance sheet is more than healthy. I cannot love the debt-to-cash ratio, but the vast majority of assets are revenue producing, which is key. I would like to see an improvement made here. However, I am not going to hold the illiquidity of the REIT's assets against it for now.

Interestingly one sell-side analyst, the five-star rated (by TipRanks) Ki Bin Kim of Truist Financial, acted ahead of earnings on Tuesday. Kim reiterated his "buy" rating on PLD while increasing his price target to $135 from $135.
Wednesday morning, the four-star rated John Kim of BMO Capital noted the Q4 beat, and record-high portfolio mark to market, alongside guidance that was largely in line with expectations. Kim, who rated PLD as a "buy" with a $140 price target, referred to Prologis as one of his firm's top REIT picks for 2023.

Prologis had a good quarter and had a good year. The REIT has a solid balance sheet that should still balance well if and when commercial real estate values take a hit.
Guidance is conservative. We like that.
The stock trades at 24 times forward-looking core FFO estimates. That's a little on the expensive side.
PLD does yield 2.6% with annual dividend payments per share of $3.16. That's a positive. 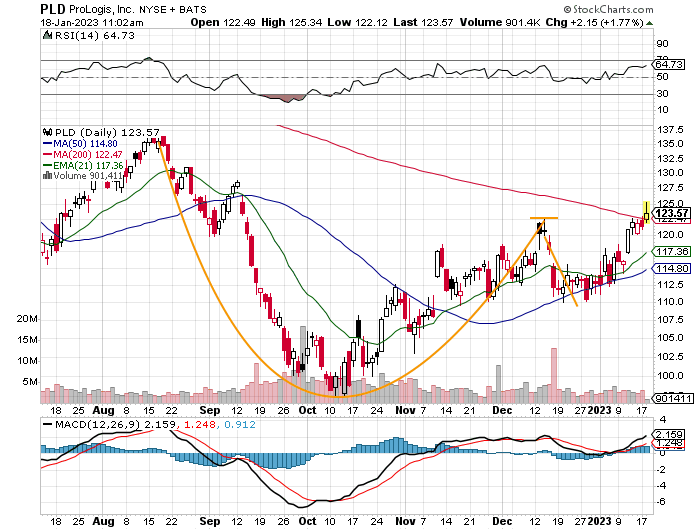 I would have rather bought some PLD at a discount. With the stock up almost 2% post-earnings, that's not likely. At least not today.
What we have here is an almost textbook example of a cup-with-handle pattern bearing a $124 pivot. This comes with relative strength and a daily Moving Average Convergence Divergence (MACD) that both seem willing to play along. One note of caution would be the decreasing trading volume as the share price has increased.
I am thinking that I need to see a retest of pivot this week. Should I see that retest and should PLD pass that trial, I would think that this stock is OK for a trade.
In minimal trading lots, I would probably be more interested in selling one February 17 $120 put for about $2.60 than paying $123 or more for 100 shares of the equity. Yes, that forfeits the dividend payments, but also reduces the risk if the economy does head into a recession this year.
This would leave the trader long 100 shares of PLD at a net basis of $117.40 if the stock were to close below $120 upon expiration. If the stock trades higher, the trader simply pockets that premium.
Get an email alert each time I write an article for Real Money. Click the "+Follow" next to my byline to this article.
TAGS: Dividends | Earnings | Fundamental Analysis | Investing | Markets | Options | REITs | Stocks | Trading | U.S. Equity