Would you like to know the most bullish thing I saw in the market on Wednesday? Sure you would. It's the fact that everyone sees the divergences and poor statistics. That's it.

Oh sure, I might also note that the selling in the indexes seems to dry up midday every day -- if there is any selling -- but let's talk statistics.

We can begin with breadth, since, as noted above, everyone sees it. Nasdaq has had negative breadth for six of the last seven trading days. The New York Stock Exchange has only had two days of it, but you might recall Friday was flat so it may as well have been negative.

The good news is that with Nasdaq's string of poor breadth the small caps will be heading toward an oversold condition in the next few days. You can see it on the chart of the Overbought/oversold Oscillator which was barely able to get over the zero line on the recent run up and is now right back down there.

Nasdaq has now had net volume (up minus down volume) negative for three straight days -- all three days saw Nasdaq green -- which is the longest such streak in two months, since right before Nasdaq made those mid-May lows. That means the Nasdaq McClellan Summation Index, using volume, stopped going up. It is trying to roll back over. You might recall it was a good tell when it turned upward in late May for the first time since February. It will now require a net differential of positive 2.5 billion shares to get it to turn back up. That would mean two fabulous consecutive days of positive volume on Nasdaq.

Then there are the number of stocks making new lows. Nasdaq has now topped 100. Just one week ago there were only 36. Now take a look at the 10-day moving average of new lows for Nasdaq. It made its low almost three weeks ago and just ticked to a minor higher high. Remember this is a 10-day moving average, so the fact that it turned up three weeks ago means this deterioration has been going on longer than that. 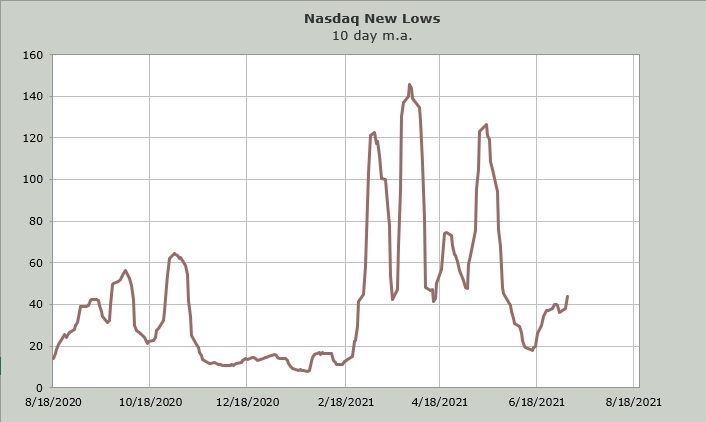 The NYSE has seen an uptick, as well, but not nearly as dramatic as the Nasdaq has. The NYSE had 38 new lows on Wednesday, whereas a week ago there were 12. So, here too, you can see the new lows are rising. The new highs remain rather steady, but if you read the list, you will see that if it wasn't for all the bond funds listed there, there would be fewer new highs. However, since I hate to rationalize an indicator, I will just note the new highs stopped expanding weeks ago.

The Investors Intelligence Bulls are back to 60.8% and the bears have ticked down to 15.5%. I consider both to be extreme now. 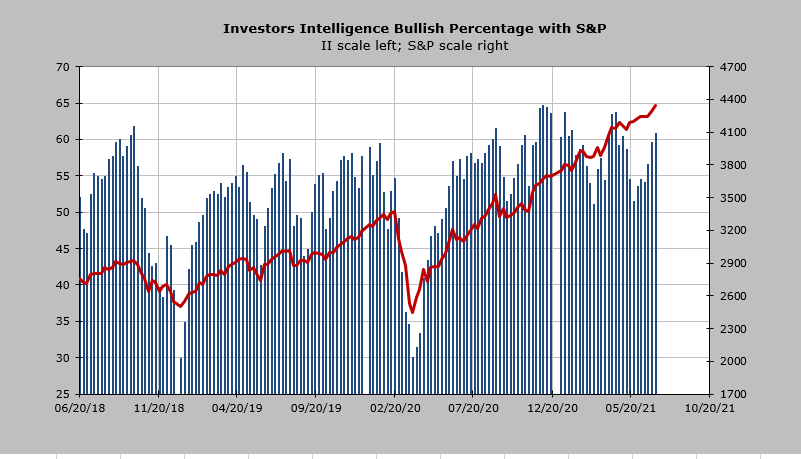 The Daily Sentiment Index (DSI) for Nasdaq is back to 87 after a dip on Monday and the S&P is back to 85. But focus on the bonds, since that is now at 87 and interest rates are the talk of the town, just as we're getting into the support area (for yields). If bonds turn south in price (up in yield) we should see the growth stocks stall out, too. I suspect it doesn't happen in one day, but gradually.