You know what's curious? The S&P -- in fact all the major indexes -- have been red now for three-straight days and I haven't received one question asking when we will get oversold again. Sure, this is anecdotal, but I find it curious all the same.

In fact, it's quite unusual.

Usually folks are so antsy that after three-straight red days this is the question on their minds. Yet this time it hasn't happened.

Are folks worn down? Are they tired of trying to catch a low? You would think that if they are trend players they might want to know when we can rally so that they can short/sell into such a rally. But no such questions made their way into my inbox on Monday.

So, when will we get oversold? It's still too soon to say.

I do, however, think on a very, very short-term basis we'll be oversold enough to bounce midweek this week. If the major indexes find themselves red by the close on Tuesday, then a one or two day rally would be highly likely.

As for Monday's action the aforementioned breadth was terrible. So much so that it is on the verge of breaking January's low which is also last May's low area. Put that on the negative side of ledger.

Also on the negative side of the ledger is the rising stocks making new lows on the New York Stock Exchange. They now number just shy of 500. At the January low, that number was just shy of 800. I always ask myself if the S&P breaks the prior low (in this case we'll call it 4,300, will there be fewer stocks making new lows than the last time? I will be honest, at the rate that the NYSE new lows are expanding, I am unsure. 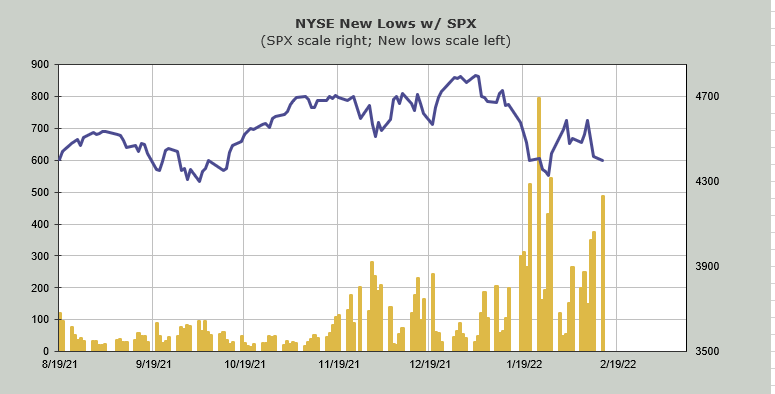 When it comes to Nasdaq, I have said I think that the peak reading of 1755 is likely to be an extreme reading so I do not expect to see that get broken. You can see that even though new lows on Nasdaq were up some on Monday, they remain far from that peak reading.

Sentiment remains quite sour but it's more like gloom and a big dark cloud hanging over the market rather than anything that feels panicky. Can you imagine if energy falters? And, yes, I still think energy is overdone up here and is in need of a correction.

Rising interest rates, inflation and market volatility are on the horizon. You don't want to miss out on this exclusive opportunity to unlock Action Alerts PLUS at our lowest price of the year.
Market volatility is on the rise. Unlock Real Money at our lowest price of the year and let our Wall Street experts do your investing homework for you.
Get an email alert each time I write an article for Real Money. Click the "+Follow" next to my byline to this article.
TAGS: Investing | Stocks | Technical Analysis |