During the " Lightning Round" segment of Mad Money Wednesday night, one caller quizzed Jim Cramer about Advanced Micro Devices (AMD) : "You just need to buy this stock," replied Cramer.

We looked at AMD back on Dec. 17 and recommended, "AMD is pointed up but I would like to try to buy it closer to $90 if possible and then risk below $85. Our targets would be the $114 to $125 area."
Let's check out the AMD charts again.
In the daily bar chart of AMD, below, we can see that traders got a chance to buy the shares around $90 in January and the recent decline in prices may have stopped out those positions below $85.
Now what?
Prices are trading below the declining 50-day moving average line but still above the rising 200-day line. The recent price weakness could even be considered a test of the 200-day line.
The On-Balance-Volume (OBV) line has made an irregular decline since early August telling us that traders of AMD have been on and off more aggressive sellers. The Moving Average Convergence Divergence (MACD) oscillator is below the zero line in sell territory.

In the weekly Japanese candlestick chart of AMD, below, we see a mixed picture. The most recent candle pattern could be a hammer bottom reversal assuming you believe that prices were in a downtrend before the pattern (reversal patterns first need a trend to reverse -- a candle pattern in a sideways trend doesn't cut it). Prices got close to the rising 40-week moving average line so we got a buying opportunity when looking at just that indicator.
The weekly OBV line has been flat/neutral for the past three months. The MACD oscillator has been pointed down since August.

In this daily Point and Figure chart of AMD, below, we can see a potential downside price target in the $70 area. 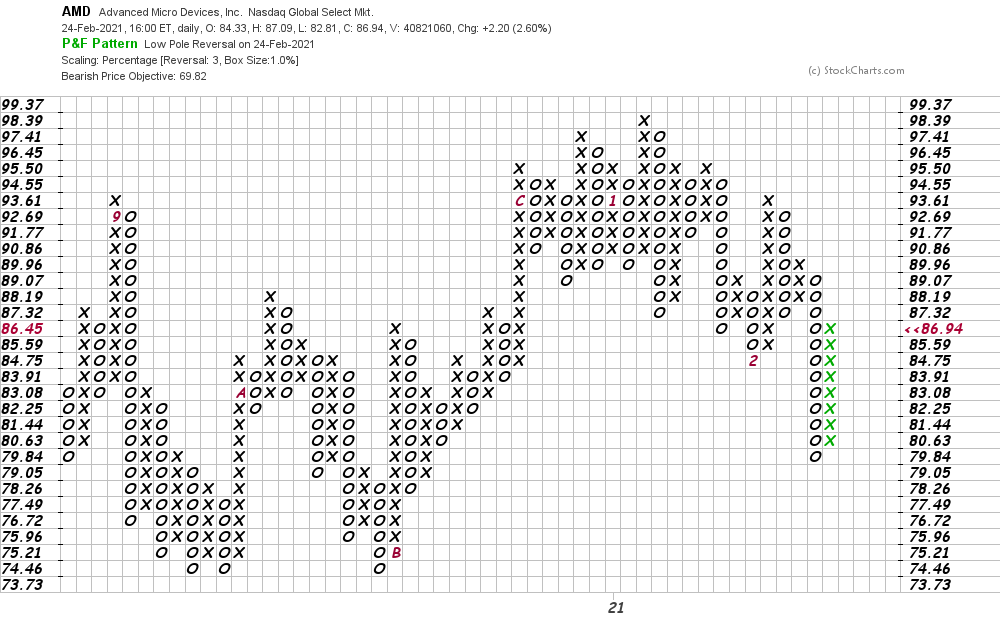 Bottom-line strategy: While AMD may rally to new heights later in 2021 it is the near-term price action that troubles me. I need to see signs of more aggressive buying and stronger indicators before recommending purchases.

(AMD is a holding in Jim Cramer's Action Alerts PLUS member club. Want to be alerted before Jim Cramer buys or sells AMD? Learn more now.)

Get an email alert each time I write an article for Real Money. Click the "+Follow" next to my byline to this article.
TAGS: Investing | Stocks | Technical Analysis | Semiconductors & Semiconductor Equipment | Technology | Mad Money