Let's check on the charts again ahead of the company's earnings Tuesday night.
In the daily barchart of ZS, below, we can see that the shares made an impressive rally into a February high. Prices have been correcting lower into May. ZS is roughly holding its March lows and staying above the chart support in the $165-$120 area from September to November of last year. Prices tested the 200-day moving average line but are now back above it and poised to retest the declining 50-day moving average line.
The On-Balance-Volume (OBV) line shows a decline from early March telling us that sellers of ZS have been more aggressive. The Moving Average Convergence Divergence (MACD) oscillator has crossed to the upside from below the zero line. This is a cover shorts buy signal.

In the weekly Japanese candlestick chart of ZS, below, we can see that prices have been correcting the big advance from the March 2020 low. ZS is testing the underside of the cresting 40-week moving average line.
The OBV line has lost a little ground the past four months and tells us that sellers of ZS have been more aggressive. The MACD oscillator is still above the zero line but it is pointed down and has begun to narrow.

In this daily Point and Figure chart of ZS, below, we can see a potential price target in the $203 area. 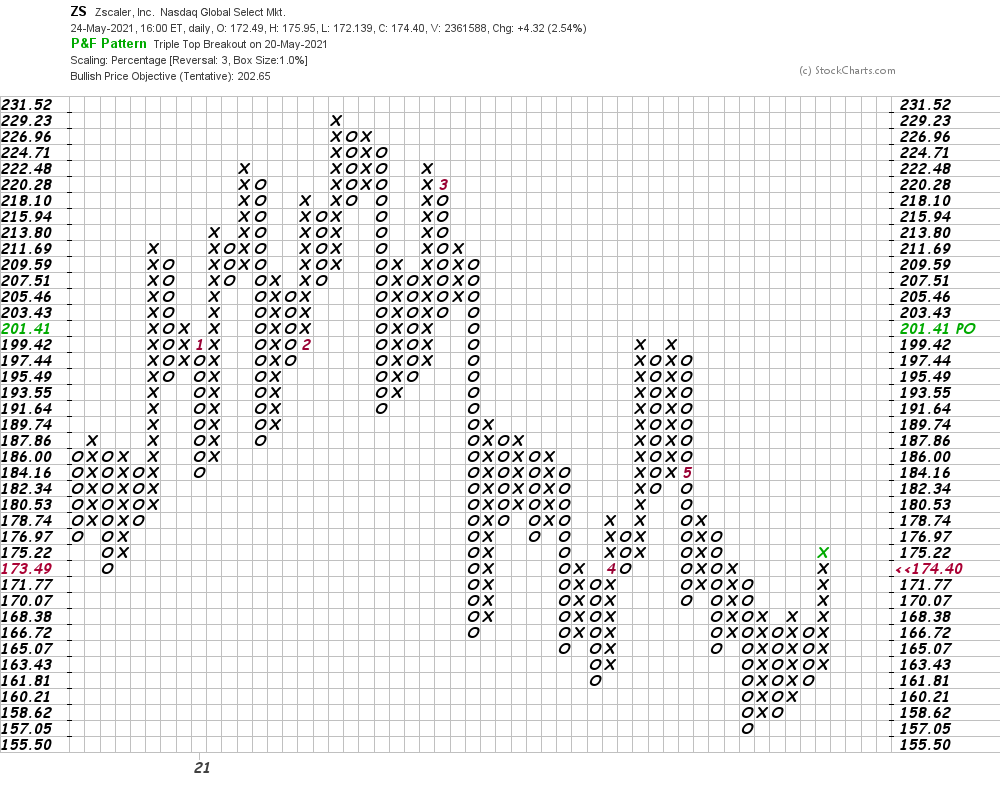 Bottom-line strategy: We have no special knowledge of what numbers ZS is going to report Tuesday night. Aggressive traders who know the risks of going long ahead of an earnings report could probe the long side of ZS today while risking to $152. Our target for now is $202.
Get an email alert each time I write an article for Real Money. Click the "+Follow" next to my byline to this article.
TAGS: Investing | Stocks | Technical Analysis | Software & Services | Technology | Earnings Preview