In his Real Money column "Let's Talk About How Much a Company Is Spending" Jim Cramer said not all spending is good spending in the eyes of Wall Street. He said that investors cheered when snack maker Mondelez International Inc. (MDLZ) increased their spending. After the close of trading Wednesday, Mondelez released its fourth-quarter numbers and the stock gapped higher Thursday and surged till the close.

Let's spend a little time with the charts of the snack company before the Super Bowl and hours of chowing down on things like Ritz and Triscuit.

The On-Balance-Volume (OBV) line moved sideways with the sideways price action but began to rise from November as traders and investors became more aggressive. The OBV line is close to making a new high for the move up and that would help to confirm the price gains.

The Moving Average Convergence Divergence (MACD) oscillator has been above the zero line since December and it looks like it just made a new crossover to the upside.

In the weekly bar chart of MDLZ, below, we can see two important consolidation patterns. The first one was around the $42 area and the second was around $54. Both are bullish and should support higher prices in the months ahead. MDLZ is above the rising 40-week moving average line after testing the line in the past three months.
The weekly OBV line has been inching up since November and is close to a new high. The MACD oscillator just turned upward for a fresh outright go long signal.

In this Point and Figure chart of MDLZ, below, we used weekly close-only data to generate the X's and O's. A potential upside price target of $72 is shown. 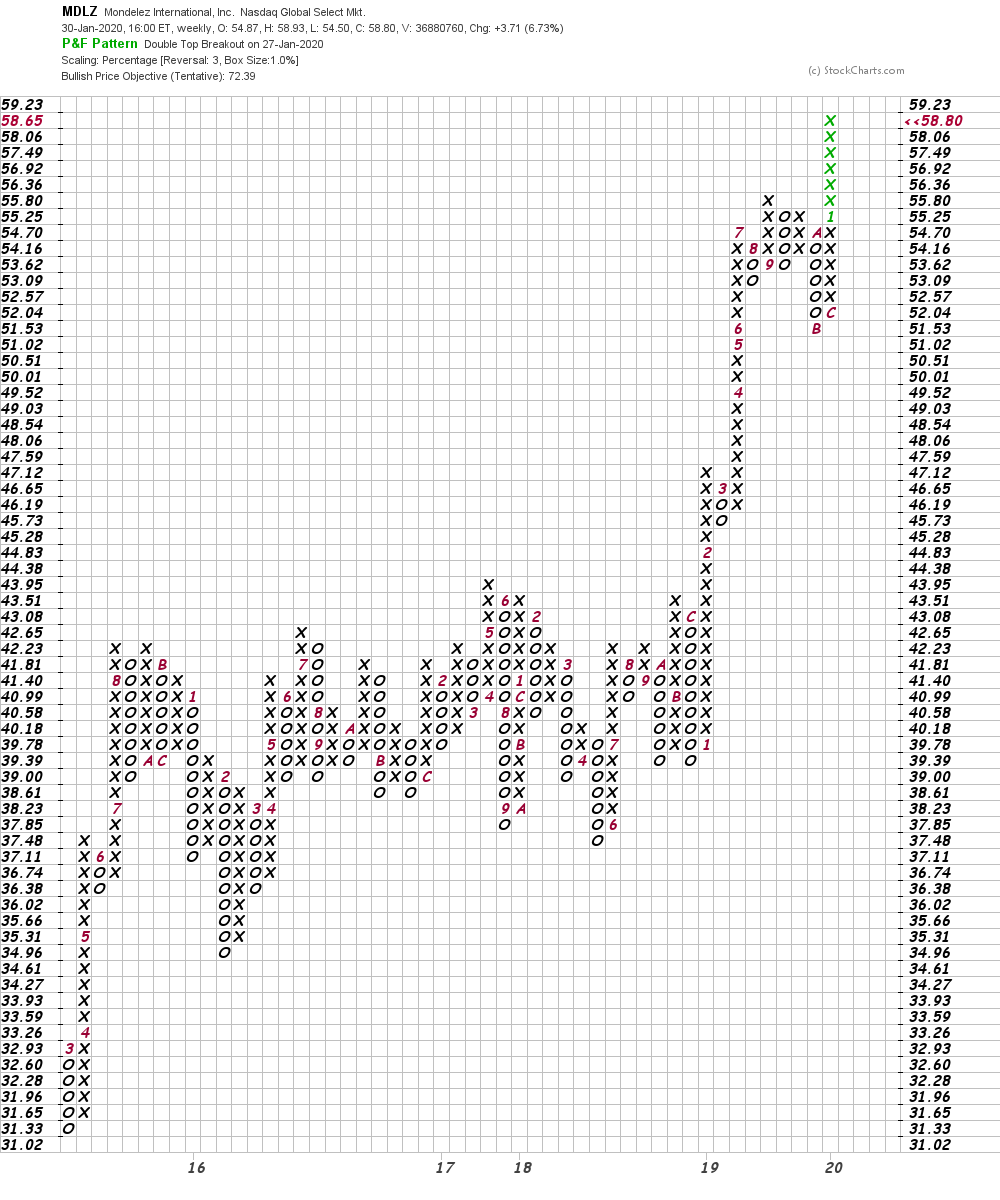 Bottom-line strategy: It would not be unusual for MDLZ to trade sideways for a few days after Thursday's strong performance. Prices could "back and fill" as traders adjust their positions -- some taking profits and others buying more shares. Traders could use this sideways price action to go long. Risk a close below $56 for now while looking for gains to the $72 area.
Get an email alert each time I write an article for Real Money. Click the "+Follow" next to my byline to this article.
TAGS: Earnings | Investing | Stocks | Technical Analysis | Food & Staples Retail | Food & Drink | Mad Money | Consumer Discretionary