We were bearish on March 5 when we reviewed the charts of Splunk Inc. (SPLK)  writing, "Continue to avoid the long side of SPLK. A retest of the March low is possible, according to the weekly Point and Figure chart. We will have to look at SPLK again around $100 to see if buyers become more aggressive in that area."

SPLK has not reached $100 but let's check on the charts again.

In the updated daily bar chart of SPLK, below, we can see that prices have made lower lows from September. Lower highs started in October. Prices remain below the declining 50-day moving average line and the now declining 200-day line. In early January we can see a bearish dead or death cross as the 50-day crossed below the 200-day line.

The On-Balance-Volume (OBV) peaked in late October and tells us that sellers of SPLK have been more aggressive. The 12-day price momentum study in the lower panel is not showing us a bullish divergence, which would mean that the pace of the decline was slowing. A bullish divergence can at times foreshadow a rebound in prices.

In the weekly Japanese candlestick chart of SPLK, below, we see a mixed to bearish picture. Prices are in a downtrend below the declining 40-week moving average line. The current candle pattern shows a smallish lower shade telling us that traders have rejected the lows of this week. It is now a large lower shadow so the rejection of the lows was not all that forceful.
The weekly OBV line is not far from making a new three-year low. The 12-week price momentum study shows that the decline is slowing but does not really show us a classic divergence.

In this first Point and Figure chart of SPLK, below, we used daily price data. Here we can see that prices reached and exceeded a downside price target in the $155 area. 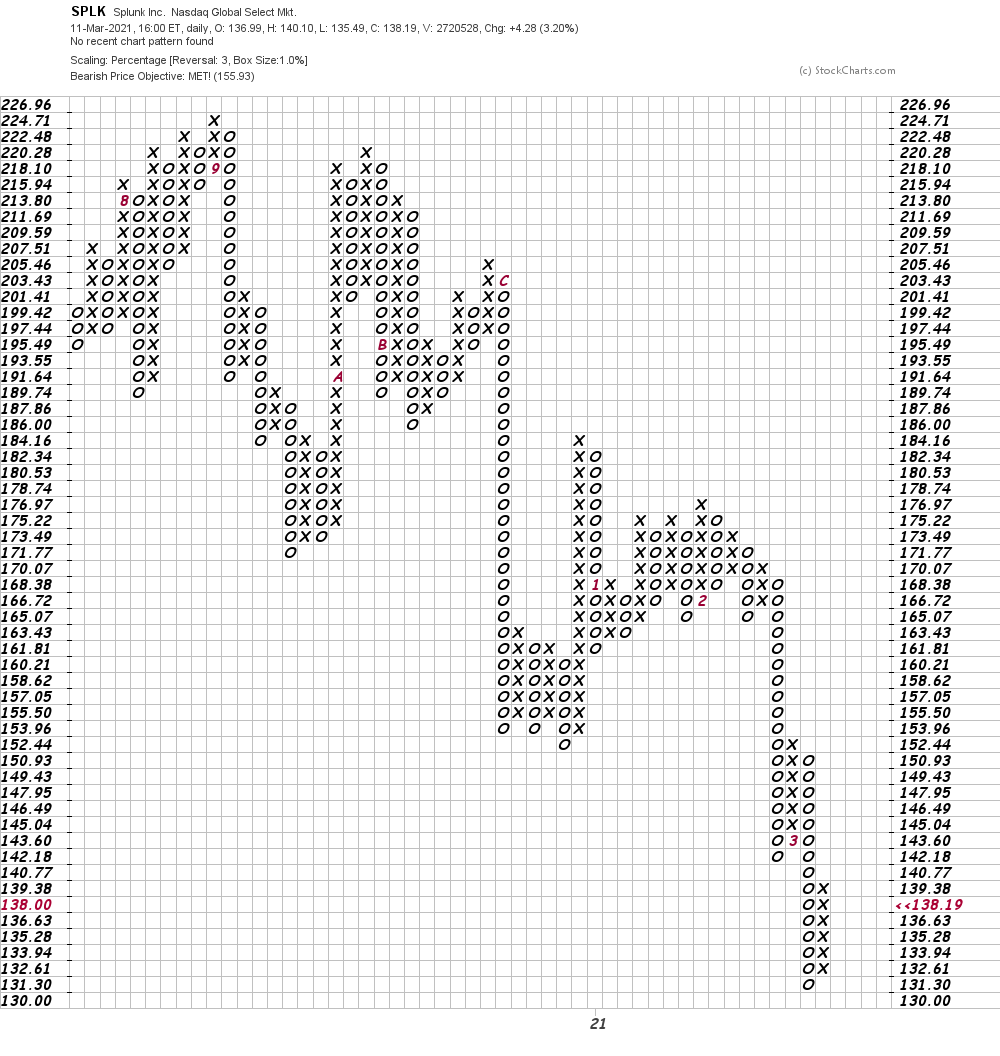 In this second Point and Figure chart of SPLK, below, we used weekly price data. Here the software is projecting the $85 area as a potential price objective.

Bottom-line strategy: There has been some slowing in the decline of the price of SPLK but overall the charts of SPLK look bearish. Continue to avoid the long side.
Get an email alert each time I write an article for Real Money. Click the "+Follow" next to my byline to this article.
TAGS: Investing | Stocks | Technical Analysis | Software & Services | Technology