Nike Inc. (NKE) was mentioned during Friday's Mad Money program from the U.S. Air Force Academy in Colorado Springs. During the Lightning Round segment one caller asked about Nike and Jim Cramer responded that, "At $90, I think it's a buy." Let's check out the charts and indicators to see how NKE might fit into a portfolio.

In the daily bar chart of NKE, below, we can see that prices largely traded sideways from March to September. In late September prices gapped to the upside and broke out of that consolidation pattern. NKE is trading above the rising 200-day moving average line but trading around the rising 50-day line.
Trading volume has been heavier since late September when prices gapped higher. The heavier turnover suggests that more traders and investors have been participating and that tends to be supportive. The daily On-Balance-Volume (OBV) line rose to a new high in October but gave back some of those gains into November. Overall the OBV line is probably bullish.
The trend-following Moving Average Convergence Divergence (MACD) oscillator is below the zero line but it has been narrowing toward a crossover signal to cover shorts.

In the weekly bar chart of NKE, below, we can see that prices are above the rising 40-week moving average line. The weekly OBV line has been on the rise from December and tells us that buyers of NKE have been more aggressive on this longer time frame.
The MACD oscillator has been above the zero line since December but has narrowed in recent weeks toward a possible take profits sell signal.

In this Point and Figure chart of NKE, below, we can see that the software is projecting a downside price target of around $82 but the chart also shows good chart support beginning at $89.07 -- notice all the highs at that level. 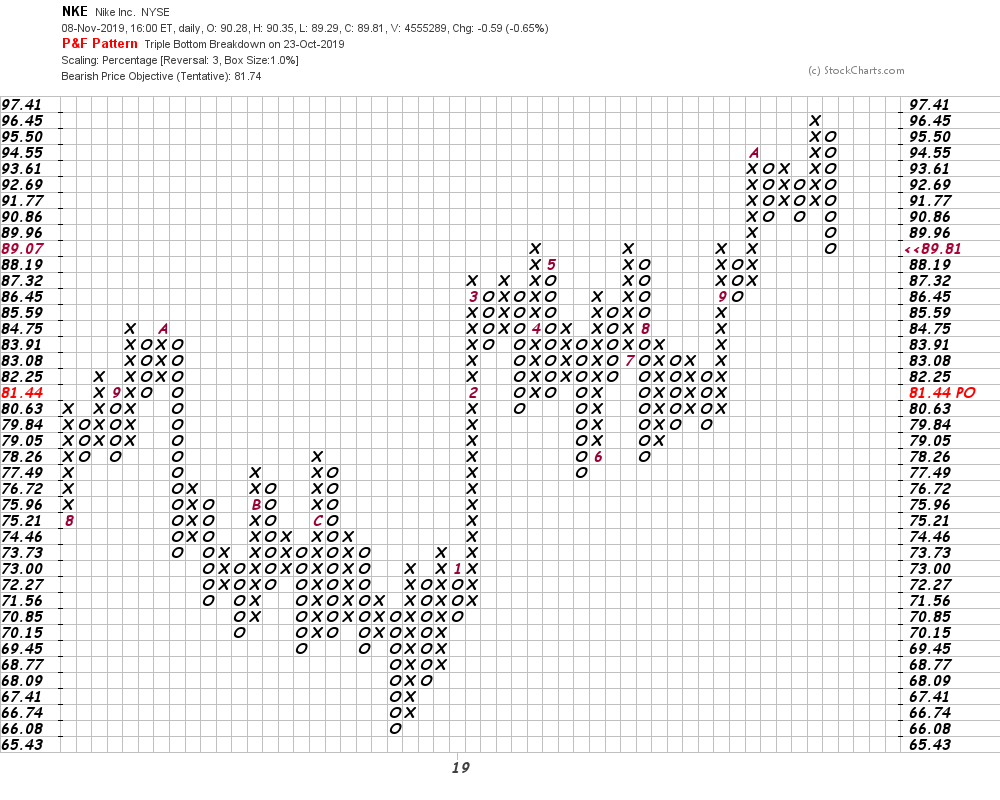 Bottom-line strategy: NKE looks more positive than negative so traders should wait to go long on a close above $91.

Get an email alert each time I write an article for Real Money. Click the "+Follow" next to my byline to this article.
TAGS: Investing | Stocks | Technical Analysis | Apparel | Sports business | Consumer Discretionary