On Tuesday, we'll hear from Action Alerts PLUS holdings Advanced Micro Devices (AMD) , Alphabet (GOOGL) , Microsoft (MSFT)  and Starbucks (SBUX) . Cramer was bullish on all but Starbucks, where growth in China could be offset by continued weakness in the U.S.

We will concentrate on AMD in this piece.

When we looked at AMD on March 16 we wrote that, "It sounds like AMD has a positive fundamental story, but right now the charts and indicators suggest that further price weakness is possible. Longer term in the second half of 2021 AMD is probably trading at new highs, but in the short to intermediate term we could see further price weakness."

Let's check on the charts of AMD again as they look stronger now.

The On-Balance-Volume (OBV) line has bottomed in the past seven weeks and the Moving Average Convergence Divergence (MACD) oscillator has firmed up to the zero line and is now poised for a bullish cross of the line.

In the weekly bar chart of AMD, below, we can see an improved and bullish picture. Notice all the lower shadows as AMD traded along the rising 40-week moving average line. Every lower shadow told us that traders were rejecting the lows.
The weekly OBV line is showing some improvement from the middle of March. The MACD oscillator is above the zero line and narrowing toward a potential bullish crossover.

In this daily Point and Figure chart of AMD, below, we can see a potential upside price target in the $99 area. 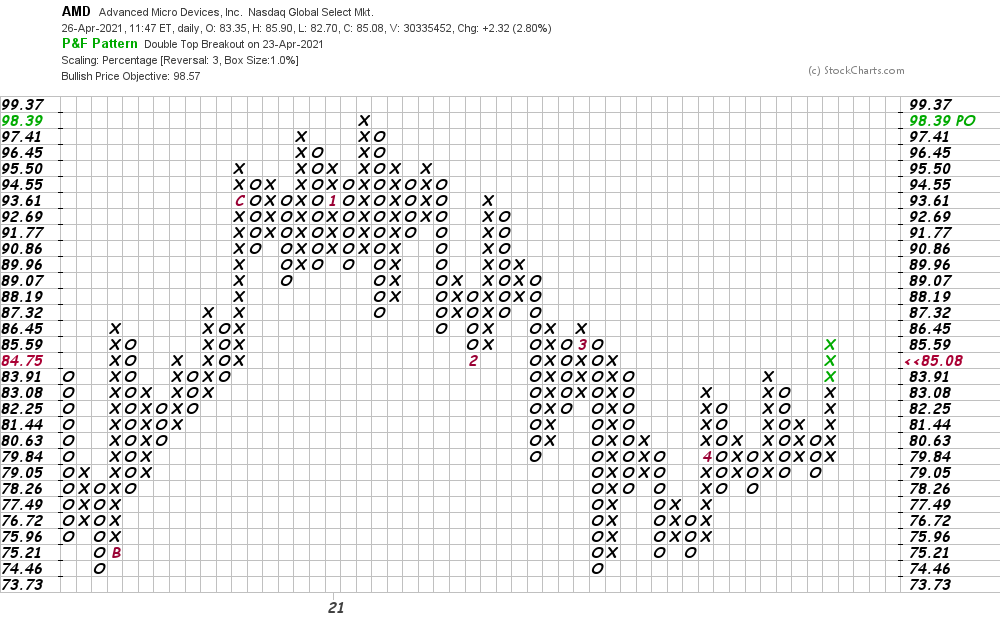 In this weekly Point and Figure chart of AMD, below, we used a five box filter and the software has produced a potential $112 price target.

Bottom-line strategy: I have no special knowledge of what kind of numbers AMD is going to report on Tuesday but the charts have turned bullish. Aggressive traders could go long AMD ahead of earnings risking to $76. Our price targets are $99 and then the $112 area.

(AMD, Alphabet, Microsoft and Starbucks are holdings in Jim Cramer's Action Alerts PLUS member club. Want to be alerted before Jim Cramer buys or sells these stocks? Learn more now.)

Get an email alert each time I write an article for Real Money. Click the "+Follow" next to my byline to this article.
TAGS: Investing | Stocks | Technical Analysis | Semiconductors & Semiconductor Equipment | Technology Hardware & Equipment | Mad Money | Earnings Preview

This Isn't a Market for Stock Pickers