This was very nearly a McDonald's (MCD) piece. Everyone likes a victorious tale of increased domestic same-store sales. Everyone who has been to a McDonald's location recently knows why.

For those following McDonald's, I do see potential for the shares to reach the $220s, but first things first, the shares have to close above $199.

I won't wet my whistle until MCD shares either come in to meet the 50-day simple moving average, or the 50-day SMA reaches the last sale. Until then, I'll just enjoy the new-ish Quarter Pounder sandwiches. They are so good.

I figure more of you came in with some kind of a position in a stock that flirts with a $10 dollar handle rather than a $200 price tag. That said, let's get after it.

General Electric (GE) reported earnings of $0.14 per share, easily beating expectations. Revenue printed at $27.3 billion. That number, though better than the consensus view, printed as a year-over-year decline of $1.7 billion.

There's some good news, and some not so great news within GE's report, but the takeaway for now, is generally positive.

Aviation showed a profit of $1.7 billion, 4% growth year over year, which was very nice. Power, which should always be a significant focus here, printed at an operating profit of $81 billion, -71% y/y. Renewable Energy lost $162 million. As for the multi-decade menace that is GE Capital, the company reported a $1.1 billion asset reduction for the quarter.

When we talk about the modern iteration of General Electric, we talk about cash burn, or free cash flow, you choose the terminology. This is the primary reason for the positive reaction at the point of sale today.

Industrial free cash flow hit the tape at -$1.2B, which means simply that GE burned far less cash than projected. CEO Larry Culp has made it his intention to get this number positive by 2020.

Wall Street had feared that this print might have been far worse today. Culp, while re-affirming full-year guidance, admitted, "This is one quarter in what will be a multi-year transformation, and 2019 remains a reset year for us."

One reason to remain sober Tuesday is that the Power unit supplies LEAP engines to Boeing BA for that firm's 737 MAX aircraft, so hopefully not too much business is lost there through no fault of GE's. 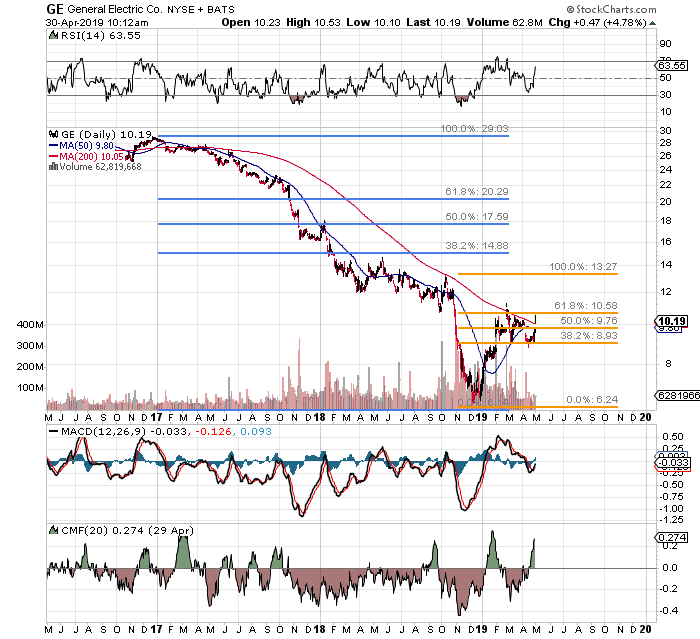 On a three-year timeframe, it would seem that an optimistic trader long the shares could target $15. However, the 18-month chart shows us that the shares that have already tested $10.60 and failed a couple of times need to take that spot and hold it. 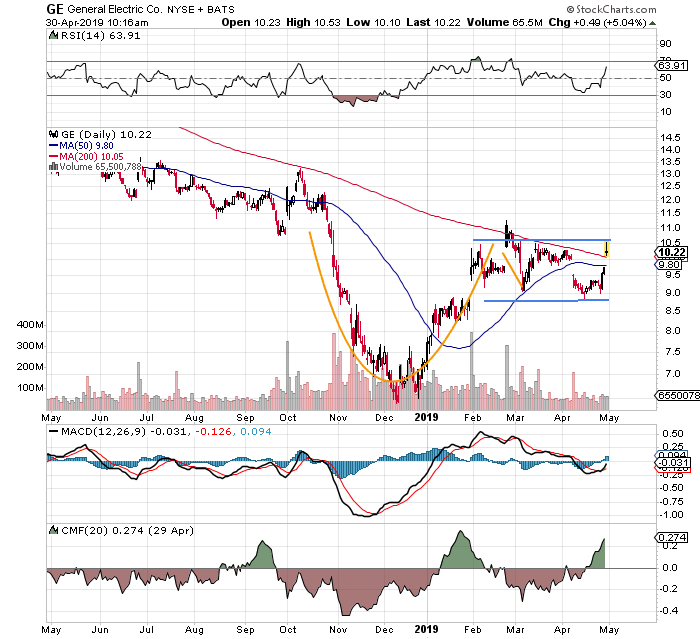 While that gives my inner dreamer some cause for tempered optimism, the shorter-term picture displays a cup with handle that produced no breakout, followed by a period of consolidation, the outcome of which could still materialize.

The problem would be that the pivot for a second attempt at a breakout does not even become a realistic possibility until the 50 day SMA is taken and held. That's $9.80. So far so good there. Then, traffic moves to the high point of the ongoing consolidation, which is still a gaudy $11.75.

I am not at all sure that GE is worthy of outright risk of my hard-earned capital. I have been accumulating both calls and puts with distant expiration dates, as well as seemingly unrealistic strike prices. Why? They cost almost nothing.

Should the shares even fake anything close to a breakout in either direction, just a few cents tacked on to these options can provide a trader with nice P/L performance if even just for one day. At very little risk.

Other than that, there are tastier fish to fry. Two of them report tonight.

Roll out the carpet for Advanced Micro Devices (AMD) , and Twilio (TWLO) . One has been a producer for me. All hail AMD CEO Lisa Su. I covet TWLO , having missed the move. I like that one in the mid to high $120's. I'll wait til they sing.

While both companies appear like winners, WBA should have more to gain because of its discounted price.

Usually comes down -- and here's why I suspect we'll retreat after Tuesday's rally.