This week represents the last of the major earnings for me. We'll still get some big names moving forward, but when viewed as a composite, things will slow beginning next Monday.

After the close on Monday, we'll hear from Alphabet (GOOGL) , the last of the FANG names to report. Unfortunately, for Google, the ability to underwhelm with earnings and still be forgiven by the market time may have passed. Expectations had been low for many names early in the earnings season, but as results have been "good enough," we have watched many names rally post-earnings. Amazon (AMZN) didn't get that benefit and I don't think Google will either.

The big question is whether revenue will continue to grow at 20% per year despite what appears to be a global ad market slowing down. If management can guide at or above those 20% levels, I do think bulls will benefit. The market has already seen cloud names report strong numbers from the small to large. Amazon, despite its disappointing guidance, still reported strong AWS growth and IBM (IBM) impressed the market with its double-digit cloud growth. Google has been increasingly linked to this space and now is rumored to be possibly interested in acquiring Zayo Group Holdings (ZAYO) .

Zayo Group provides communications solutions focused on colocation and cloud infrastructure. The company houses a 130,000-mile network in North America and Europe. In short, Zayo provides bandwidth and connectivity over a network infrastructure. By using a pre-built space like Zayo's, businesses can significantly reduce their capital expenditures and improve their bottom line (profitability). Additionally, the data-center provider can tailor its offering to specific client needs also known as enterprise solutions. A move like this propels Google into direct cloud competition with AWS and IBM.

Google also recently acquired Smartwatch technology from Fossil (FOSL) , so one should anticipate a challenge to the iWatch forthcoming as Google puts to work some of its large pool of cash expanding into wearables. Although a small move in terms of dollars, this is a strong demonstration Google is willing to chase some high-growth markets like wearables and the cloud.

The market anticipates a move around 5% post-earnings this week. Over the past five reports, Google has moved at least 5.5% intraday every time, but the company has failed to close with a greater than 5.3% move for two-and-a-half years now the day after it reports. In other words, if you buy volatility today, be ready to pull the trigger intraday Tuesday. 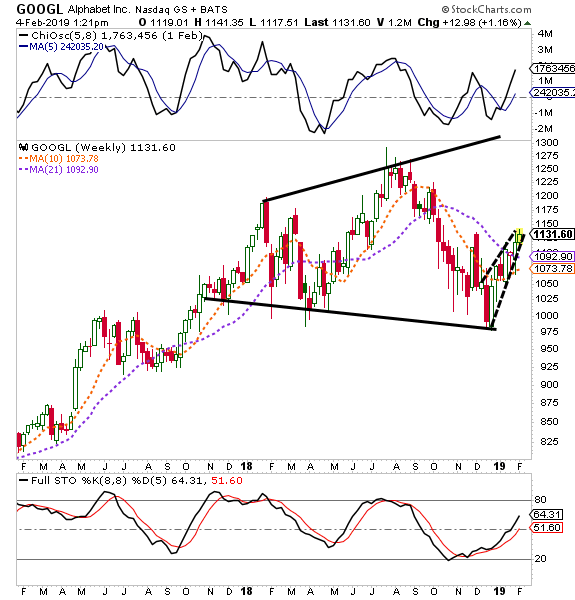 While the daily chart favors the bulls, I have concerns with the current weekly setup. Going back over the past year, a megaphone pattern has formed with higher highs and lower lows. This is a strong pattern for the bears. Add in the rising wedge from the December low and Google becomes very vulnerable under $1,100. If I were long, I would have myself protected below those levels. Should Google push over $1,150, it should have a clear path to $1,225 although I see $1,250 as the ceiling until the next earnings report at the least.

I believe Google is transitioning for the better into high-growth sectors that have years of upside ahead; however, it will take time to adapt. Until then, Google will rely on search and global ads, areas I don't view as particularly bullish. I prefer the wait-and-see approach into earnings. The risk versus reward is a coin flip at best, but if I had to make a call, I think the coin comes up bear rather than bull Monday tonight.

Get an email alert each time I write an article for Real Money. Click the "+Follow" next to my byline to this article.
TAGS: Fundamental Analysis | Investing | Stocks | Technical Analysis