Was it short covering or was it real buying?

That was the question that littered my inbox Tuesday. I don't have the answer. And why should it matter? Buyers can get shaken out just as easily as short sellers.

Just look at the chart of the QQQs with volume below. Ask yourself how many days do you see the black volume bars significantly higher than those around them? Not often. But the red bars are higher and are higher often. 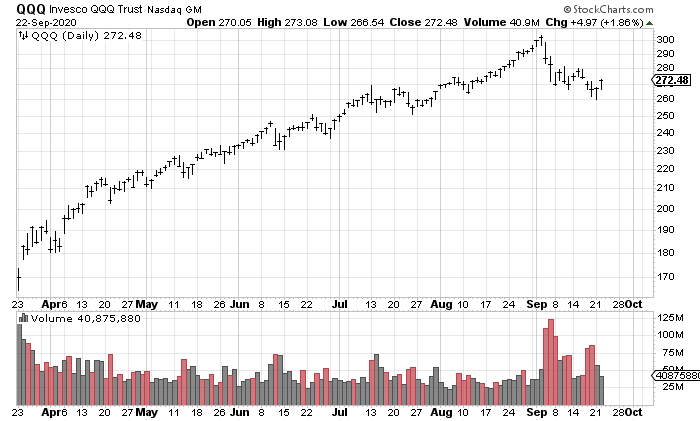 If you want to fret over something, then fret over breadth, because it was truly awful. I mean net breadth on the New York Stock Exchange couldn't even get to positive 400 issues. This in turn keeps that McClellan Summation Index, which tells us what the majority of stocks are doing, heading down.

Even over on Nasdaq, where I prefer to look at net volume (up volume minus down volume), we find that in the last two trading days, net volume is flat as a pancake and Nasdaq is up 170 points. Thus, not impressive, is it?

Or how about the number of stocks making new lows? Monday I praised the Nasdaq new lows for contracting vs. two weeks ago. That is still a positive, but when you have 60 new lows on Monday and 56 on Tuesday, a day the market spent most of the day on the upside, again, that is unimpressive.

The 10-day moving average of new lows for Nasdaq, which I had been praising as it declined last week, is now threatening to turn back up, and it would be doing so from a higher level.

So far, it's only been one day, so breadth could click in later this week, but if this continues, we'll be right back where we were in August, when most stocks went down and tech went up. That would mean the indexes get the love, and everything else doesn't.

The chatter this week has been more favorable toward technology than it was last week, which should come as no surprise. The question is how fast the sentiment shifts.

In the meantime, the Dollar Index, which I have liked since its lows in early August, is finally coming up against that big resistance at 94.

It is a very well watched reading. Currently the Daily Sentiment Index is at 46, so it's neutral (it was single digits at the low). I think it eventually gets through, and if it does, we'll see how quickly sentiment turns.