Among our ranks, out there somewhere is the trader who paid $445 for Boeing Co. (BA) last week. I won't lie to you, I'm an aggressive fellow.

Good thing I hang around smart people. As the guy with the pitchfork sits on one shoulder repeatedly telling me to grab some here, I think of the three-day rule. Wait ... there's a much safer way to play this.

I think of other times when I have sold short (naked) puts at distant strikes in high-priced, potentially volatile names. Thankfully, not today. I once spent months fixing a situation I put myself in concerning Nvidia Corp. (NVDA) . By the way, I did get out of that one alive, but it did become my focus for far too long. That was completely unnecessary.

So, no, we will not throw that wayward trader a life preserver down many percentage points from last week's highs. That said, is there something creative we can do to try to turn a buck as money moves across these markets? Always is.

On Sunday morning, just in case the reader is unaware, an Ethiopian Airlines Boeing 737 Max 8 took off from Addis Ababa. The intent was to land in Nairobi, Kenya. The aircraft lost contact six minutes later. At least at first glance, there are similarities between this crash that cost the 157 people on board their lives and the Lion Air crash five months ago off the coast of Indonesia that coast the 189 people on board that plane their lives.

The crew of that Lion Air 737 Max 8 was known to have battled to maintain control over their aircraft following what reportedly may have been some kind of equipment malfunction. On that front, Boeing has been working with the Federal Aviation Administration (FAA) to create a software fix for an anti-stall function designed for the 737 Max 8. That function, known as the MACS (Maneuvering Characteristics Augmentation System), was thought to have triggered a sensor reading that had repeatedly pushed that craft down prior to the crew losing control. No one knows if Sunday's problem is related. The black box, though damaged, was recovered.

The Chinese government responded by grounding the nation's entire fleet across several carriers of 737 Max 8s. This is thought to impact less than 100 aircraft in total. Indonesia then followed China's lead. U.S. carriers that have taken delivery of the 737 Max 8 would be Southwest Airlines Co. (LUV) , American Airlines (AAL) and United Airlines (UAL) .

Southwest remains confident in the "safety and airworthiness" of its entire fleet. LUV flies 31 of these aircraft. American flies 24 of them. So far, I have not seen a major U.S. airline say anything along the lines of grounding the aircraft.

It's almost a certainty that the purchase of aircraft from Boeing will be a significant part of any trade deal that the U.S. and China might reach. Does this throw a monkey wrench in the works? My guess is only if indeed this crash is similar to the crash five months back. Only if this would create a significant delay in Boeing's ability to deliver. This obviously complicates matters, but I do not think this derails an agreement if everything else falls in place.

That said, the item is undeniably a bargaining chip. 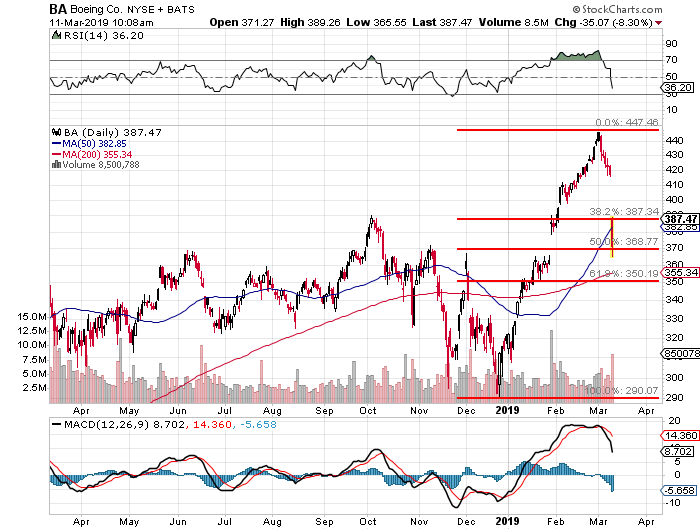 Boeing shares have rallied from early levels while I have been working on this piece. My thought is this: I may purchase a small amount of shares. I usually lead into a position with roughly one-eighth of my intended size. Here, it may be wise to start out with one-sixteenth. I would expect that the investor is going to have to create an average price over weeks. I would not enter above $387. For me, I need the initial tranche to be purchased between the 50-day simple moving average (SMA) of $382 and the 50% retracement level off of the 2019 rally ($368).

A risk-averse trader could purchase $405 calls expiring this Friday for a cool $4 or so, while selling $425 calls with the same expiration for about a buck. This way, there is a profit to be had and a technical snapback at a fixed expense.

Delta Air Lines (DAL) trades at 7x forward-looking earnings, pays a better dividend (2.8%) than the competition, and it does not look like it has taken delivery of the aircraft in question. The way to play this news on a budget is to get long some Delta.

Get an email alert each time I write an article for Real Money. Click the "+Follow" next to my byline to this article.
TAGS: Investing | Stocks | Aerospace | Airlines | Real Money | Stock of the Day