We have got to talk about volume.

Why? Because all day when the Nasdaq was lower, up/down volume was so remarkably positive (at least two to one) that it seemed so odd. Most of the volume on Nasdaq tends to come in the big cap stocks, and with so many of them red on the day, such positive volume seemed out of place.

The volume is something we have discussed with some regularity, here so let's first review what we've seen.

The McClellan Summation Index for Nasdaq, where I use volume, has been terrific. A week ago it threatened to halt its rise, but this week it got right back on track. Nasdaq volume as a percentage of total volume (on a 30-day moving average) is showing a high level of speculation. So, while one is a positive (the Summation Index) one is a negative (high speculation).

Then, when I did my statistics at the end of the day, I saw that Nasdaq had some of the highest volume I've ever seen at 6.2 million shares. It is certainly the highest volume in five years. I immediately looked at the Invesco QQQs (QQQ) and their volume. The QQQs typically have high volume on a down day and as you can see by looking at both charts the big spike in volume for Nasdaq recently was the March decline. Yet the volume for the QQQs was quite light on Thursday. 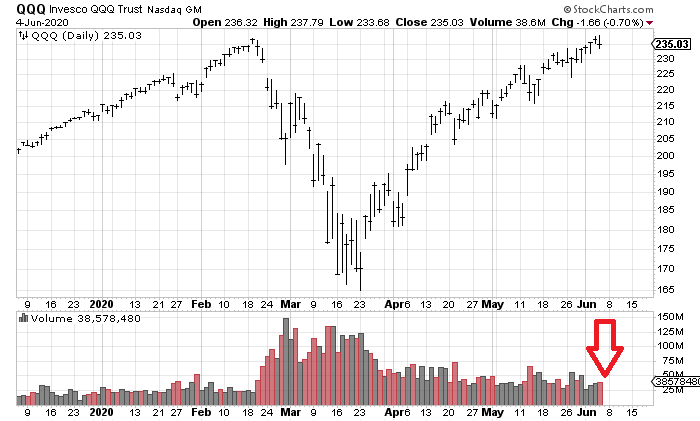 Then I realized that some of the more speculative names like Luckin Coffee (LK)  and two airlines, American Airlines (AAL) and United (UAL)  trade on Nasdaq. Now, together, these three stocks' volume don't even add up to a billion shares, so there has to be something more to this. I suppose if I went through the entire ACTIVE list I'd see plenty more of these sorts of names.

I don't know what to make of it, except that it seems to me there's a whole lot of speculation going on, mostly because I revert back to that chart of New York Stock Exchange volume relative to Nasdaq.

Aside from that, breadth was fine despite the indexes being down. The number of stocks making new highs for Nasdaq continues to lag. The NYSE saw some improvement this week but like Nasdaq, there was no follow-through.

We've already discussed sentiment in terms of the very low equity put/call ratio. The 10-day moving average of the total put/call ratio is creeping into the extreme zone now, as well.

Then there is the National Association of Active Investment Managers (NAAIM) and their Exposure Index, which shows they have increased their exposure, not quite to January levels, but close to it. 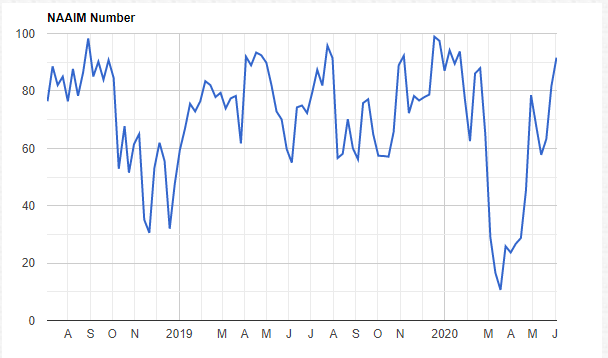 The market is overbought and the only thing it has done so far is find Nasdaq in a chop-fest. Sentiment is a bit too bullish for my taste, as well. And now if my interpretation of this volume is correct (too much speculation in the market) then we should correct. However, there is still no deterioration underneath, so until we see that, it's just a correction.

Get an email alert each time I write an article for Real Money. Click the "+Follow" next to my byline to this article.
TAGS: Investing | Stocks | Technical Analysis | VIX | Bearish Bet | Stocks Under $10 |