The S&P 500 closed September at 3363. It closed Thursday evening at 3310. Unless it rallies hard on Friday, it appears we'll have a second down month in a row.

I do not cite that S&P number for any other reason than if it is a down month, I think we can expect to see all sorts of statistics telling us what happens after two-down months in a row. Perhaps it will bring about more bearish chatter.

It's curious that sentiment remains sanguine. Yes, we had a mild panic on Monday and again on Wednesday -- when we saw the put/call ratio over 1.0 for the first time in over a month. But what I find quite curious is that the more intermediate-term sentiment indicators have not moved much this week.

I have cited the Investors Intelligence, but have given you the caveat that the readings were as of a week ago, so I would expect them to change when we see this week's readings midweek next week. But did you expect the American Association of Individual Investors (AAII), the folks who spent every month since March, leaning bearish, to show no change in bulls or bears this week? I surely didn't. And that voting closes on Tuesday, so it did encompass this week. There are more bulls now than there were in July, or even mid-May.

Then there is the National Association of Active Investment Managers (NAAIM), who don't tend to flip around as much as the AAII folks do, but they do rotate quite frequently. Recall a few weeks ago their exposure was over 100%. Last week it was 87%. This week it is 79%. So, sure, that's down but it was just over 50% at the September low. This is tallied on Wednesday, so it surely includes the decline this week. 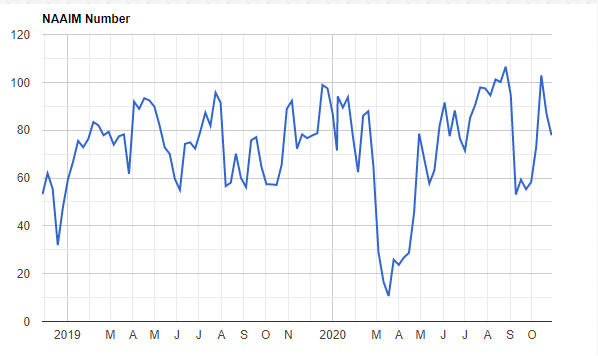 I just expected these metrics to see a larger change in sentiment than they have. And I find it bothersome that three weeks into a decline, we haven't seen a larger shift. Three weeks into the September decline we did.

Away from that, we did finally get the oversold rally. And we do remain short-term oversold. I still expect we'll see some more upside attempts, even if Thursday was somewhat disappointing for the bulls.

I want to end with a comment on gold. Ever since the high in August -- when sentiment got far too bullish -- I have been asked when I would be interested in gold again. Weeks ago, I noted that there was a measured target around $170-$172.

You can see the chart does not look good, because it broke the uptrend line. But the Daily Sentiment Index (DSI) is down to 16. The gold exchange-traded fund (GLD) closed at $175 on Thursday.

It is not hard to imagine that one last whack down into the target zone could be accompanied by a single-digit DSI. I am not as interested in the price so much, as the DSI. Get it to single digits and we'd probably want to buy gold for a trade.