Why isn't there anyone talking about a retest in this market? That was a question I heard this week. I would say that's because up until Tuesday, none of the major indexes had even visited their January lows. So let's explore this.

But first let's note the current expression, "buyer's strike," which is thrown around so often now that it made me remember an old expression we used to use in the markets before the advent of computerized trading. It went something like this: It takes real buying to push a stock up, but it can fall of its own weight.

That really does seem to be what we've got in the market right now, doesn't it? Yet, how many years did we see the market with no sellers? I suspect if we can get to that decent oversold condition that I have my eye on and then get a rally off that condition, that there will be buyers. Why? Because that's how markets work. Sellers appear out of nowhere, but so do buyers. Nothing goes up or down in a straight line. I suspect folks feel that way about a buyer's strike right now, because we got overbought nearly two weeks ago and have been down ever since. Recency bias is powerful.

I realize I have been harping about waiting for the oversold condition to develop. Last week I noted I was going to be a stickler in waiting and I am still leaning that way. Let's begin with the Oscillator. If we get a day or two on the downside you know that blue line is going to be near the bottom of the page, right? That would make it oversold. And if it gets to the bottom of the page and is still higher than the January low? That would be a positive divergence, wouldn't it?

The McClellan Summation Index is heading down. It currently needs a net differential of positive 1,900 advancers minus decliners on the New York Stock Exchange to halt the decline. At positive 2,000, it has stepped a toe into oversold territory. At 4,000, it has moved to grossly oversold. So can you see how another day or two on the downside would get this metric oversold?

Here's another tidbit. Nasdaq, for all its ugliness, hasn't taken out the closing low from January yet. The S&P has. Yes, this is a change. Nasdaq only needs about 30 points more to do so, which it might just get on Wednesday. But maybe this means that the stocks that have been down and led us on the downside are no longer getting sold (for now). Rather, now, they are selling the index movers which is why the S&P is feeling it so much.

One other point. Nasdaq, again for all its ugliness, has now been red for four-straight days. Do you know it hasn't gone to five straight since September?

Then there are the stocks making new lows. Sure they expanded on Tuesday, but at 660 new lows on Nasdaq that is still over 1,000 fewer than there were a month ago.

And the NYSE, where I match it against the S&P finds new lows at 335, which compares to nearly 800 the last time the S&P was here. In fact, the S&P is now, on a closing basis, lower than it was in January. So we already have a positive divergence in place. 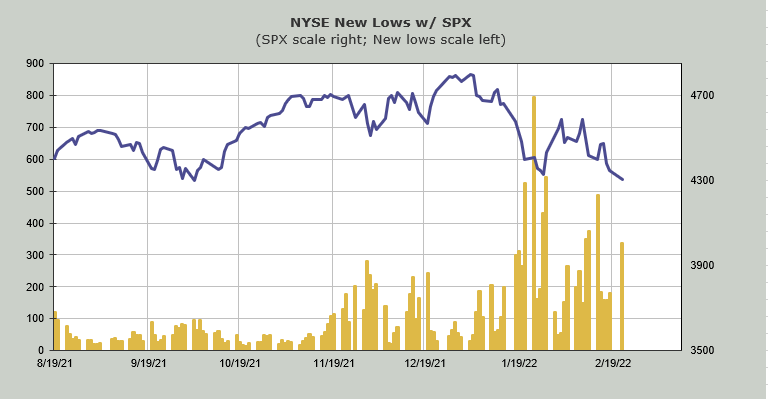 Due to futures trading on Monday -- while stocks took the day off -- the Daily Sentiment Index (DSI) didn't quite move the way I thought it would. After Monday's shortened session, Nasdaq's DSI got to 10, but after Tuesday's midday bounce it ended the day at 15, as did the S&P.

Let me finish the sentiment discussion by noting I don't think we need panic to get to an oversold rally. Panic would help but is not a necessary ingredient.

I would still prefer to see another day or two on the downside to set up the oversold condition, but I believe we are due for an early March oversold rally.