Has it only been a week since we had the "Realization Day"? Why, yes, it was last Wednesday, when all of a sudden folks realized why they were selling: Because Fed Chair Jerome Powell announced a faster taper. At least that was the narrative.

Yet, Chair Powell did not reverse course. He did not announce the Fed would no longer taper, or even slow it down.

Oh, you think we went down because of the new Covid variant, Omicron? Well, that doesn't make a whole lot of sense to me, either, because most stocks were heading down, since early November, before anyone even knew there was a new variant.

Now that the market has put in good consecutive up days, you would think folks were all bulled up, but that is not the case. The put/call ratio remained high at .95 and the International Securities Exchange Equity call/put ratio chimed in at 2.05, the first reading over 2.0 since early June.

Remember, the high ISE Equity reading in early June was not exactly bullish, was it? (See the arrow on the chart.) But the situation is a bit different in that the market had been rallying for a month already by then, not a few days.

I do want to point out that should Russell 2000 fund (IWM) pull back from here and should it manage to fill that gap down below at $220, wouldn't it possibly be putting in a head-and-shoulders bottom?

Also, exactly a week ago I highlighted that the Daily Sentiment Index (DSI) for crude oil had reached 21 and that crude itself was at support, as was the oil exchange-traded fund (OIH) . Both have since rallied, but should OIH pull back from this very obvious resistance, isn't it possible the formation would be a head-and-shoulders bottom?

Statistically speaking breadth was terrific, the best we have seen since last spring. And it was good enough to halt the decline of the McClellan Summation Index. This is the first time it has stopped going down in a month.

I should also note that there was a major change over on Nasdaq where the number of stocks making new lows did not even reach triple digits for the first time in a month. In fact, the 10-day moving average of this metric actually curled down on Tuesday. 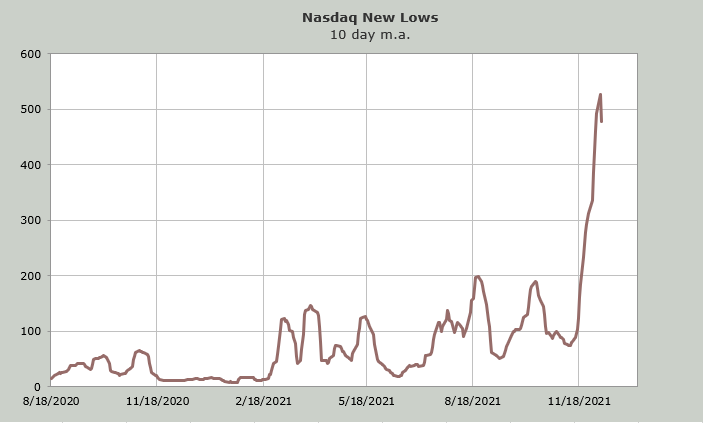 The big fly in the ointment is the big picture for breadth. You see, the S&P has recaptured almost its entire decline and breadth, while good these last few days, is still far from its high. 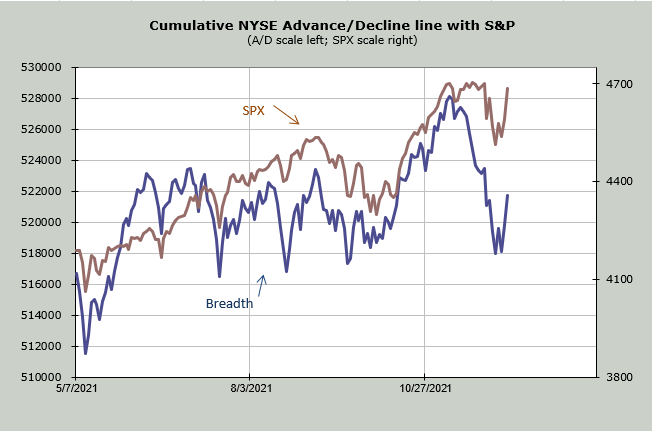 What we do not want to see is a repeat of the index movers taking the baton forcing the indexes to new highs and everything else lagging. That never helps the indicators.