One thought goes through the brain. "Oh no." First... the smell. About two seconds later, you can't see, can't breathe, mucus everywhere.... the skin burns. Using water makes it hurt worse. Let it burn. You learn fast. How to get a mask on. Just where in your kit the Atropine is. It is very hard to explain to someone never exposed. CS gas, considered by many to be the most painful, non-lethal version of tear gas available. It teaches one how react in less than a second. If outdoors, better to see someone else react upwind before the effect is ever felt. Warning.

Financial markets, if anything, have been trying to warn. The transports, obviously have turned hard. The small caps have shown weakness in a strong dollar environment, despite the fact that for the most part, this group operates in a single currency theater of execution. Sectors directly reliant upon growth have suddenly become subject to bouts of profit taking. There were indeed profits to take. The OECD, the ECB, the Atlanta Fed. Nobody paints a pretty picture moving forward. Now this.

Everyone knew that the Chinese economy was in a jam. The data released on Wednesday night (Eastern time) was a bit worse than ugly, however. The planet cheered the mirage that was growth in Chinese exports for the month of January. A February drop of more than 20% just hit global financial markets like a bowling ball thrown off of a cliff. The Shanghai Composite gave up 4.4% on Friday, the worst day for that volatile index in six months.

Some economists will rationalize, blaming the Lunar New Year for the inconsistency. While that certainly added to the lumpiness of this data, market participants must also understand that the PBOC (People's Bank of China) had spread 4,64 trillion yuan around that domestic economy in the form of debt in January. This data actually benefited from loosened monetary policy.

Perhaps that nation becomes more desperate. Perhaps they are already there. Early Friday morning, U.S. envoy to Beijing Terry Branstad seemed cautionary on just how imminent a deal with China might be, as he indicated that still no date for a summit had been set. We have told you that the widened trade gap might just be emblematic of a lack of demand on the other side, rather than it a failure of policy. If so... greatly increased volatility will increase as President Trump presses his advantage. Warning.

But The U.S. Consumer is Okay, Right?

Define okay. On Wednesday night, the Federal Reserve released January data for Consumer Credit. Credit extended to U.S. consumers grew to the tune of $17 billion, of which $2.6 billion would be considered revolving, or credit card debt. After a December with less than $1 billion growth in spending on credit cards, does that mean the consumer is once again good to go? Or are the folks in over their heads trying to keep up?

Remember no matter what "they" tell you... (write this down) if nonfarm productivity (currently 1.9%) plus consumer-level inflation (currently 2.2%, or 1.6% at the core) equals or is greater than wage growth (currently 3.2%), then no... it is impossible in aggregate for the U.S. consumer to be just fine. By the way, the academic economists at the Fed understand this. This may be an incredibly simplified model, but I am sure that the reader can see the logic.

So it is that also, according to the Fed and in an article that I found at Zero Hedge, 37 million credit card accounts had a 90-day delinquency strike placed on their corresponding credit report at the end of the last quarter. By my math, which can be subjective (actually, I'm pretty good at math), that's more than 7.7% of all domestic credit card accounts, and on those accounts run an aggregate account balance of $68B billion or so. Good thing the younger generation isn't buried in student loan type debt. They'll carry the football. Oh, wait. Never mind.

On that note, in these January numbers, the amount of consumer credit laid out by the federal government increased by $26.6 billion (non-seasonally adjusted), while that number decreased by $15.9 billion for depository institutions. In other words... keep your helmets on. The kids are not alright, and their parents are strapped.

Are equities still in a secular bull market. or are they maybe still in a bear market, and this was just one heck of a two-month chance to regain ground lost over the last three months of 2018? If you know, I want to read your opinion. E-mail me. Tell me on Twitter. Anything.. because I'm not really sure.

I do know (really, I don't know anything), I mean I do think that though, for the S&P 500, the 200-day simple moving average has been pierced, but I would not yet truly call it broken. Perhaps after the opening on Friday. Perhaps after the BLS releases the February jobs numbers, we'll know more, but I will show you this. 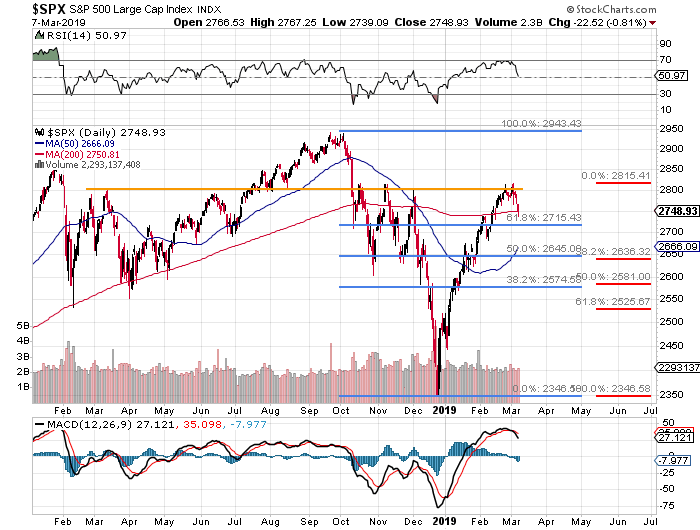 Should this 2750-ish level fail to hold, there could be some traffic in the 2715 area, but I would not count on it. Algorithmic sellers could shoot for the 2636 area in an effort to shake you out before they turn on a dime. Trade your book. Mess with your allocation. Leave your cash alone. You thought human traders were cold as ice, these algos just don't care. About anything other than profit.

Last Thoughts Before The Dawn

I think the Fed is stuck for now. For reasons explained here on Thursday. For reasons well explained earlier in the week by Dallas Fed district Pres. Robert Kaplan. Because the rest of the planet is swimming the other way, and because higher interest rates simply exacerbate the Fed's own mark-to-market insolvency. It's okay to root for the economy here, with Q1 GDP tracking just a smidge above the flat-line. We need to see further development of sustained wage growth, of sustained participation... and most all, kids... we need to see a rebound in Housing Starts for January. That said, I think we will.

Nothing like a five dollar rotisserie chicken. So, I came in long Costco (COST) . Should have written that one up for you instead of Kroger (KR) . Sorry about that. Then again, I wasn't so sure of this trade twenty-four hours ago, and I knew that I didn't like Kroger. COST reported results for the firm's second fiscal quarter on Thursday night. In terms of profitability, they crushed it, beating EPS expectations by 31 cents. Revenue came in lighter than consensus, but still grew 7% year over year.

That's not why the stock ran 5% overnight. The stock ran primarily because what had been a decay in operating margin made a turn for the better, as the firm benefited from lower fuel prices and lower cost sourcing for product. Perhaps even more impressive was the 6.7% increase in same-store sales that apparently had not been cannibalized by a 25.5% increase in e-commerce. That, my friends, is called execution.

In fact, the pop in profitability will lead the chain to increase both starting salaries, as well as salaries for supervisors. 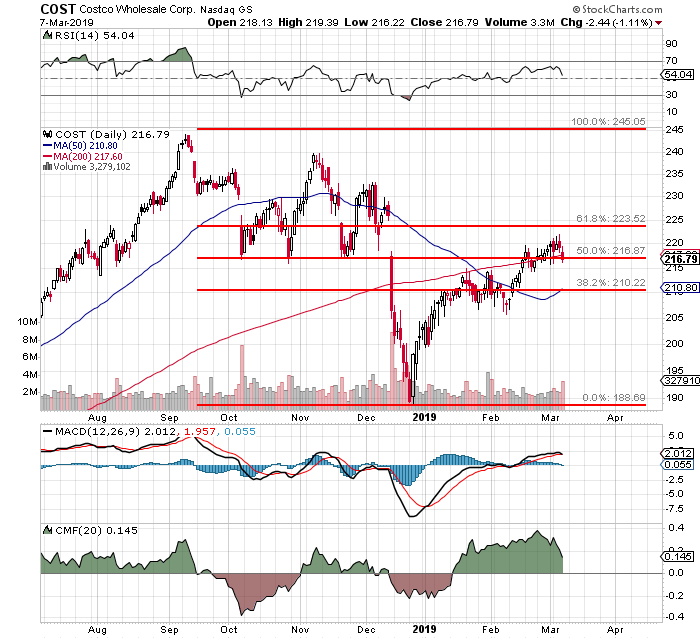 I will exit the name this morning sometime after publication. Why? No, not because of the pay raises. That is actually a positive, and I still do like the company. Simply put, I am, among many things, a trader, and the stock is trading above that $223.50 level, which had become my target price.

I would like to start adding again in the $216 area down to $210 when weakness strikes, and it probably will at some point. I will likely sell puts expiring sometime in the next three months bearing that level as a strike price. This will amplify my Friday win (in a sloppy tape) on this trade, as well as set up my forced participation when the name comes my way again.

Get an email alert each time I write an article for Real Money. Click the "+Follow" next to my byline to this article.
TAGS: Investing | Stocks | China | United States