I still believe the market will get overbought by the end of this week. The Overbought/Oversold Oscillator has only barely ticked over positive 500, and, even if the market takes a breather Wednesday, I can see this indicator having one more fling to the upside -- and into the overbought reading.

Keep in mind that this is based on the 10-day moving average of the net of the advance/decline line. So we look back to see what numbers we are dropping. Two weeks ago this coming Wednesday will be the day the S&P lost nearly 100 points. On that day, net breadth was negative 2,100, so if we just do some back-of-the-envelope math, we know that breadth would have to be worse than that on Wednesday for the Oscillator to not go up. After that, it gets much harder for the Oscillator to rise. Thus we are overbought in the latter part of the week.

And, yes, I know my Saturday Twitter poll showed exuberance, but we still should get to an overbought reading; that's what happened in October. And I might even point out that for the second day running, the Daily Sentiment Index (DSI) for Nasdaq was 91, so it's possible the market doesn't wait for the end of the week. But if I had to guess, we get a down day and then one more rally try into the overbought condition.

Several folks have inquired about why I think the Volatility Index was not down on Monday. I could counter that question with a question: Why can't the VIX break 20, no matter what the market does? I honestly do not know. What I do know is that the 21 day moving average of the put/call ratio for the VIX has turned up. The last time it did so was in early September. We had a correction in stocks off of that and we saw the VIX rally. 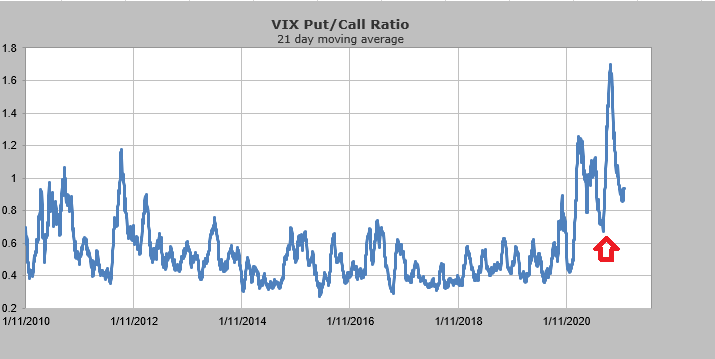 My template is still that October time frame. That's when breadth looked terrific, when the number of stocks making new highs increased, and when an unusual occurrence happened: The indexes sputtered and rolled over before the indicators did.

Right now breadth is terrific. The new highs have increased and the McClellan Summation Index is rising. All positives.

But keep in mind we're heading toward an overbought reading. Sentiment is getting frothy after getting despondent 10 days ago, and the VIX is back to the lower end of the range it has been in. I would also point out that the dollar was weak on Monday.

Finally, once again the chart of iShares 20 Plus Year Treasury Bond fund (TLT) has found itself at the lower channel line that has been a place to bounce from on every touch since last summer. There is no reason to think it won't enjoy another oversold rally.

Get an email alert each time I write an article for Real Money. Click the "+Follow" next to my byline to this article.
TAGS: Investing | Micro cap stocks | Stocks | Technical Analysis | VIX |