Two days ago folks didn't seem to have a care in the world when it came to the market. Remember, "stonks only go up"? Here we are, two days later, and the S&P hasn't budged and the Russell 2000 is down on the week and we've moved toward "isn't that a head-and-shoulders top in the IWM  (IWM) "?

And I even drew it in for you last week, right here, before we rallied. To me, that's how obvious the pattern appeared, that we could see it coming a mile away. Now it seems it is clear as day to many.

The question is will it play out similar to the way the one on Nasdaq did a few weeks back? By that I mean when we had that pattern and we got to the neckline (blue) and I noted that when everyone sees it, we often find it doesn't work. So did the Nasdaq head-and-shoulders top work? Sort of. But, boy, did you have to be quick. It lasted three whole days, one of which was an up day. It also did not meet its objective target, which would have been around 12000.

Indicator-wise, we have a market heading toward an overbought reading and we have sentiment that got a bit too giddy earlier this week. Recall the Daily Sentiment Index (DSI) for the S&P got to 90 (it has since backed off to 85) and the DSI for the Volatility Index got to 9 (it is now 10). To that I can add that the Investors Intelligence bulls jumped six points this week to almost 61%. That is the highest reading for the bulls since the week just before the GameStop (GME) fiasco in January.

So while you can't even see the S&P's pullbacks on the chart we all know quite well late January scared folks. We also know the February decline scared folks as well. So why don't we see any of the pullbacks on the chart of the S&P? Well the Investors Intelligence report is released on Wednesday, so I mark the S&P with Tuesday's close. Apparently, if you were long the S&P on Tuesdays-only in 2021 you ... never had a correction.... 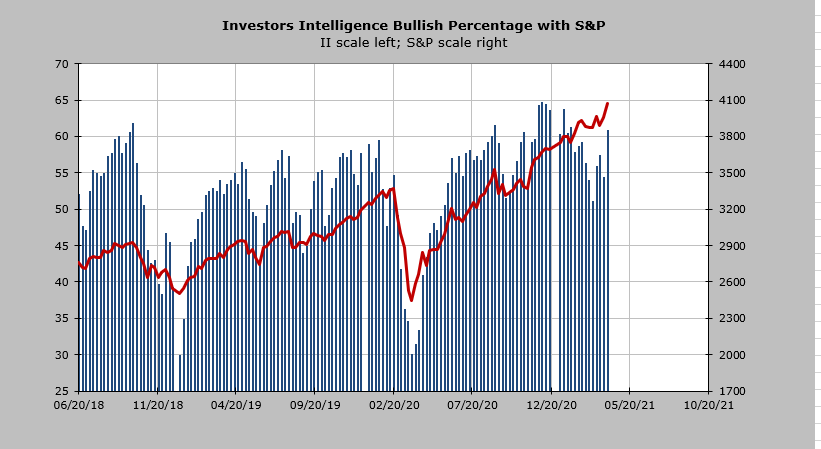 We already did the exercise for the Overbought/Oversold Oscillator and its upcoming overbought reading (notice Nasdaq inched over the zero-line on Wednesday).

Here, we'll check in on the Nasdaq Momentum Indicator, where I plug in higher closes for Nasdaq over the next week or so. It peaks on Tuesday. So sometime in the next few trading days I expect Nasdaq to get overbought.