In the second "Executive Decision" segment of his "Mad Money" program Monday, Jim Cramer spoke with Brian Goldner, CEO of Hasbro Inc. (HAS) . "I think this is a very well-run company," Cramer said, adding that Hasbro deserves a second chance and has a lot of good things going for it right now. We looked at HAS last week, but a second look cannot hurt.

From 2012 until 2017, Hasbro had 5% annual revenue growth and double-digit earnings growth, Goldner said, but then the Toys R Us liquidation caused a big headache for toy makers. It made 2018 a very disruptive year, even for Hasbro's best brands. However, Goldner was very optimistic that Hasbro will return to its prior trajectory. Inventories are down and momentum is strong, he said. With HAS licensing the Walt Disney Co. (DIS) characters and themes, it should do well in 2019. Hasbro also has several digital gaming initiatives, one of which, Magic: The Gathering, is gaining serious online traction. Let's check the charts again.

In this daily bar chart of HAS, below, we can see that the indicators are still bearish but prices had not started a leg lower. We can see a wide trading range but not a sustained decline. When prices do not do what is anticipated, another look is warranted. HAS touched the declining 50-day average line and the rising 200-day line. The daily On-Balance-Volume (OBV) line is still pointed down, telling us that sellers of HAS had been more aggressive and now the Moving Average Convergence Divergence (MACD) oscillator has crossed to a take-profits sell signal.

In this weekly bar chart HAS, below, the bearish signals of last week are still intact. Prices are below the 40-week moving average line. The weekly OBV line is still pointed down and the MACD oscillator is having a muted reaction after a cover-shorts crossover. 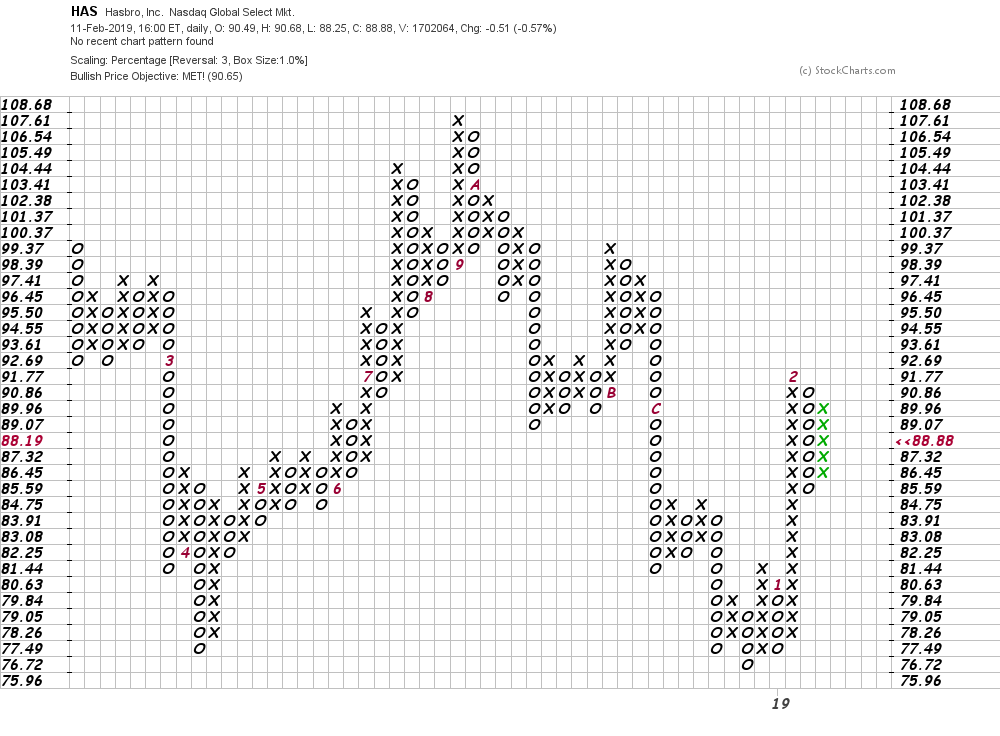 Bottom line strategy: HAS sounds like a bullish fundamental story but the charts are not in gear; wait until the charts and story match.

Get an email alert each time I write an article for Real Money. Click the "+Follow" next to my byline to this article.
TAGS: Investing | Stocks | Technical Analysis | Consumer | Digital Entertainment | Real Money | Consumer Discretionary