For the Executive Decision segment of his "Mad Money" program Tuesday, Jim Cramer spoke with Brian Goldner, chairman and CEO of Hasbro Inc. (HAS) , the toy maker that finally has put the Toys R Us liquidation behind it and delivered a second-quarter earnings beat of 28 cents a share that sent its shares soaring 10% Tuesday.

Goldner painted a bullish picture for HAS, saying the company continues to see strength in many of its brands, including Magic The Gathering and Transformers. Hasbro also has announcements scheduled for later this year regarding its Nerf toy line and several Walt Disney Co. (DIS) products for the Star Wars franchise and the "Frozen 2" movie.

Hasbro remains committed to returning capital to shareholders, Goldner said, and has bought back $1 billion of stock as well as raised its dividend for 15 of the last 16 years. When asked about China, Goldner said China remains a great place to make quality toys, but Hasbro continues to diversify its manufacturing around the globe, including here in the U.S. as well as in India.

Let's check out the charts and indicators for HAS.

In this daily bar chart of HAS, below, we can see that prices made a low in late December with the broad market. HAS traded sideways for almost four months, which allowed for investors to accumulate (buy) the stock before the gap higher in late April. Another gap higher can be seen on Tuesday. Prices are above the rising 50-day moving average line, and the 200-day average is showing a slightly positive slope now.

The On-Balance-Volume (OBV) line bottomed in February and has risen to a new high, signaling that buyers of HAS have become more aggressive. The Moving Average Convergence Divergence (MACD) oscillator has been above the zero line since late April and it is turning upward to a fresh outright go long signal.

In this weekly bar chart of HAS, below, we looked back four years to give us more perspective. HAS has broken out above its 2017 highs. Prices are above the rising 40-week moving average line. The weekly OBV line shows a long rise through last August before a correction. The OBV line has been firming the past four months and is not all that far from a new high. The MACD oscillator is in a bullish configuration well above the zero line.

In this Point and Figure chart of HAS, below, we can see the price action without any gaps. Prices have broken out to new highs and a $135 price target is indicated. 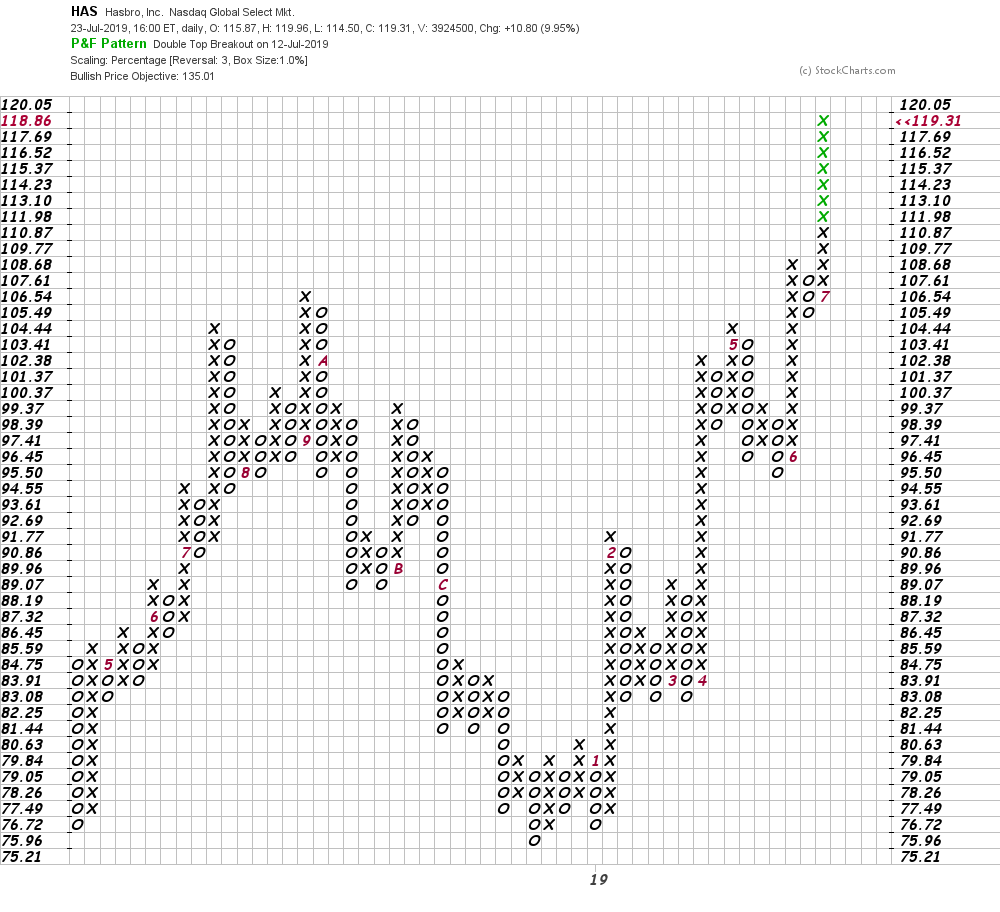 Bottom line strategy: Traders looking to go long HAS could wait for a move closer to $115 to buy or buy a two-day pullback (here time is the trigger and not price). Risk a close below $110. Our initial target is $135 from the Point and Figure chart (above).

Get an email alert each time I write an article for Real Money. Click the "+Follow" next to my byline to this article.
TAGS: Earnings | Investing | Stocks | Technical Analysis | Consumer | Retail | Mad Money | Executive Interview | Real Money