By STEPHEN GUILFOYLE Apr 08, 2020 | 12:18 PM EDT
Stocks quotes in this article: HD
One of our longtime faves, Home Depot ( HD) , reported the firm's fiscal fourth quarter performance on Feb. 25, covering the period ending Feb. 3. That performance, even with a small minus tick year-over-year for revenue, did beat on both the top and bottom line. It appeared that the firm had smoothed out a couple of wrinkles and returned to the consistency that so many of us had become used to from this firm, one of the greatest retailers of our time. This performance -- and even the results that all came before it -- was truly apparent that all heck was about to break loose.
Just from the myopic view of someone working from home, I know that not everyone else is able to do so. One of my sons is now on the sidelines. He hasn't been laid off. All of his customers are either canceling or have been shelved themselves. His monthly income was down about 80% in March. He's a real go-getter, not the kind to sit on the couch, playing video games during the day, though he does enjoy them. (Most accurate kid I have ever seen on the Ma Deuce, no joke.) He asked me if I minded if he turned part of my backyard -- we have a small, suburban lot -- into a sustenance garden in case we run out of food. He's done a good job.
He needed to frame the garden with lumber. He needed top soil, fertilizer, seeds, and a bunch of other stuff that he knows about, but I do not. Where did he go? Home Depot. Not the store, but the website. Like clockwork, the van pulls up, and whatever it is that he orders ended up piled in my driveway. No delays or uncertainty, like we are all experiencing from retailers of food items or personal products. Know what I saw just yesterday, as I strolled around the perimeter of my home? Progress. The very first sign of actual potatoes growing just a few feet from the house.

From the Family 'Farm' to the Firm

Of course it's not business as usual for Home Depot. The shares gave up more than $100 between late February and mid-March. It's now more than $50 off of the recent lows. Me? I timed my exit nearly perfectly. My re-entry has left some room for improvement. I'm still not back in. The stores have had to cut back hours across the nation, and some have even had to close -- see Vermont. Does an order like that end up standing in just one state? Personally? I doubt it.
By late March, it had become obvious to the casual observer that the nation -- and planet -- was now in a state of severe economic contraction, and that recovery will be as tricky as, well, as difficult as anything any of us have ever seen, or any of our leaders have ever managed. Home Depot went to the well, so to speak. The firm raised $5 billion through the sale of four tranches of debt that will mature in 2027, 2030, 2040, and 2050 respectively. The firm already had $30.6 billion in total outstanding debt, and one has to think that the funds raised will not only allow some of this debt to be pushed out (refinanced) but solidify (just me thinking here) the $6 annual dividend that's yielding 3.1% at these share prices. That's important, if one is thinking about getting back into the name even here after missing the bottom by a country mile.
I'll tell you what. I do like that the firm is paying hourly wage associates a little more. I do like that the firm has passed out thermometers to these associates, so that they can check their temperatures before punching in. I do like that at least from the point of view of this family, they have been spectacularly reliable. I also think that as the weather warms -- as it is really just starting to here in the Northeast -- that more and more people will try to make use of what they have, as my son is, or, perhaps, take on projects inside the home. No, this will not return the chain to normalcy, but it will, in my opinion maintain revenues and cash flows at what are at least minimal support levels. 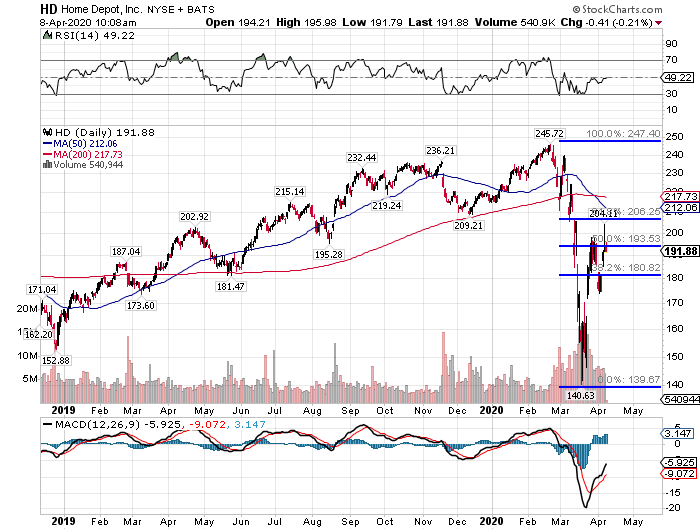 At first glance, we see the vertical downside violation, after a long bullish period. Then wee see the near perfect 61.8% retracement, and we think the move is done. Put this one to bed. But ... then we see it. We stretch out the chart, focusing on the right. 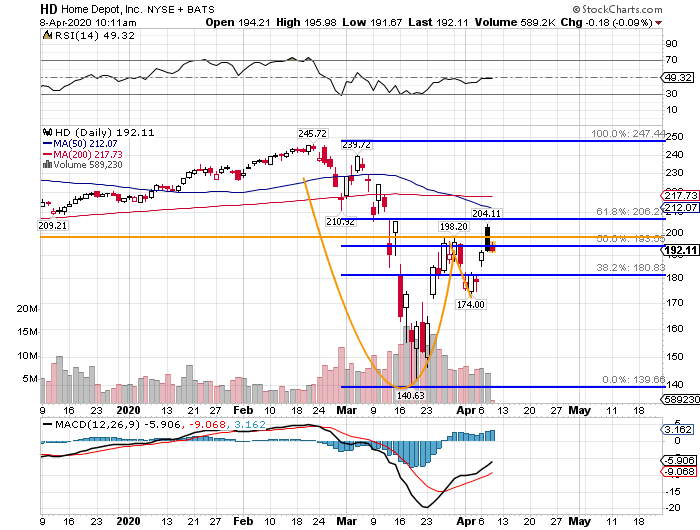 Suddenly, we notice a one-month cup with a one-week handle. The pivot would be 198, and it did provide a pop that everyone's favorite 12th century, Italian mathematician put a halt to. That does not mean that these shares can not make a second attempt to storm the castle. Home Depot reports May 19.

OK, the fact is that investors can not go large on any stock in this environment, and for Home Depot, I would think that one might want to frame the trade around first earnings. The problem is that beyond the immediate future, HD options are not that liquid, so the trade, in its entirety, would have to be adjustable, in strike price, or perhaps even in expiration, but this is the gist of what I am trying to get across.
- Purchase 100 shares of HD at or close to the last sale of $193.68.
- Protect that position through the purchase of one May 22 HD $182.50 (a rough 8% below pivot) put. These are not trading, but the implied value is $8.95.
- Partially subsidize the expense of this protection through writing (selling) one May 22 HD $210 call (basically close enough to the 50-day line, but still paying some premium). These are also not trading, but run with an implied valued of $6.35.
Note: Overall, net basis for the position is increased to $196.28, still below pivot, but leaving room for a solid 7% max profit at expiration, but buttoned up enough to prevent disaster. An investor could also sell May 22 $175 puts for maybe $6 to drive net basis lower, but that  does unbutton the trade (open the investor up to increased equity risk). That might not seem too risky in normal times. But these are not normal times.
Get an email alert each time I write an article for Real Money. Click the "+Follow" next to my byline to this article.
TAGS: Buying a Home | Investing | Stocks | Retail