Jim Cramer is recommending just three cannabis companies and GW Pharmaceuticals plc (GWPH) is one of them (the other names can be found here). Let's check out the charts and indicators of GWPH this morning.

In the daily bar chart of GWPH, below, we can see an interesting "V-bottom" pattern on the chart. Prices quickly declined from $180 in early October to touch $90 in late December -- a classic 50% correction. Prices quickly rebounded back to $180 in just two months. GWPH closed back above the 50-day moving average line in early January and above the rising 200-day line at the end of January. Small dips in February have held at the 200-day line. Volume was strong in January as prices turned up again.

The daily On-Balance-Volume (OBV) line bottomed with prices in late December and is now right back up at it September zenith. A new high in the OBV line is likely very soon and it will help to confirm the price gains. The Moving Average Convergence Divergence (MACD) oscillator crossed to the upside in early January for a cover shorts buy signal. By mid-January the oscillator crossed the zero line for an outright buy signal. A fresh buy was signaled Wednesday.

In the weekly bar chart of GWPH, below, we went back four years to show the early 2016 low. Prices have made higher lows and higher highs and the pattern is likely to be refreshed is GWPH makes a weekly close above $180. It has been hard to draw a major uptrend line on this weekly chart but GWPH still meets the simple definition of an uptrend.

The weekly OBV line has been rising since early 2016 telling us that buyers of the stock have been more aggressive for a long time. The line did decline for about four months in late 2018 but it is back near its all-time high. 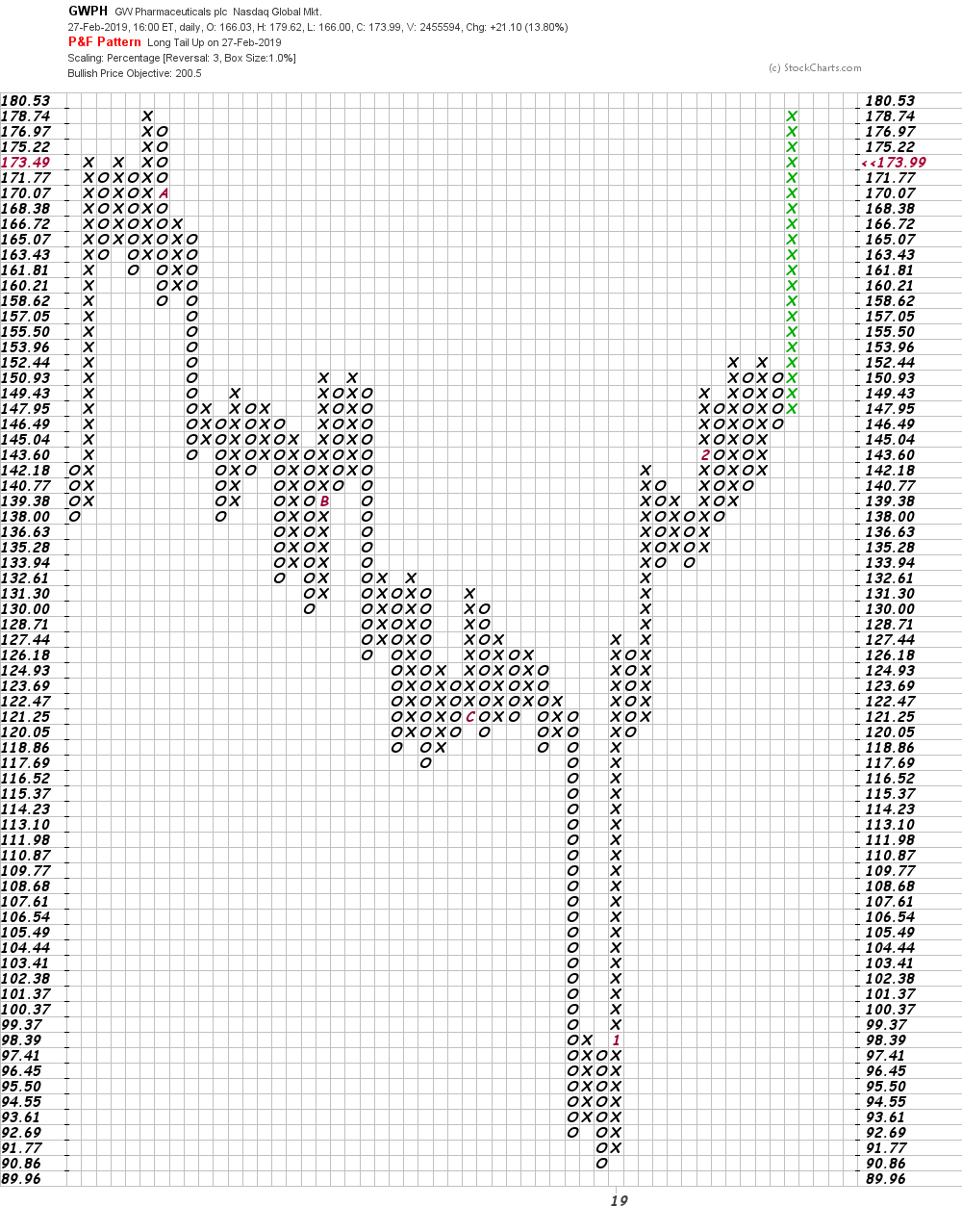 Bottom-line strategy: Because GWPH has risen so far and so fast it would not be unusual to see prices trade sideways for a few days or even a few weeks. Prices could also just continue to rally but some sideways action would be welcomed. My potential price targets are $200 and then $275. If you happen to be long from lower levels you are in the driver's seat. If you are looking to go long here we have to discuss the risk. Do we risk below the gap or below $150? That's a lot of money. Do we risk below Wednesday's low? That may be too close. I suggest that if we do get a short period of sideways trading that a stop could then be identified. Patience.

Get an email alert each time I write an article for Real Money. Click the "+Follow" next to my byline to this article.
TAGS: Investing | Stocks | Technical Analysis | Pharmaceuticals | Cannabis

As the NFT Marketplace Heats Up, Let's Focus on Gas Prices

I'm excited to see what a Coinbase offers, but there's a catch for investors looking to pocket some coin.