Glover said that GW brought in $240 million in revenue from Epidiolex, the company's treatment for epilepsy. Epidiolex is still in its early stages, Glover said, and the drug is being approved for additional indications.

Let's check out the charts and indicators of this drug maker.
In the daily bar chart of GWPH, below, we can see that the shares have been making a basing pattern -- sideways price movement around the 50-day moving average line. We can imagine a left shoulder back in November/December and a head in March and a right shoulder being made now.
The volume pattern does not really reflect a bottom in that it should be increasing on the rallies from these lows but the On-Balance-Volume (OBV) line does show a rising pattern from December to February and from April to July. These two rising patterns on the OBV line suggest that prices are bottoming.
The Moving Average Convergence Divergence (MACD) oscillator has crossed to the upside three times from below the zero line to correspond to the three lows over the past 12 months.

In the weekly bar chart of GSPH, below, we can see the past three years of price activity. Prices made a significant decline from its high in mid-2019. The shares have recovered from their March nadir but are trading just below the flat 40-week moving average line.
The weekly OBV line has been in a decline with a low in March of this year. The OBV line looks like it is making a higher low now and that could be part of a turnaround.
The MACD oscillator is just below the zero line but narrowing so we could see a new outright buy signal soon.

In this daily Point and Figure chart of GWPH, below, we can see a potential upside price target in the $122 area. 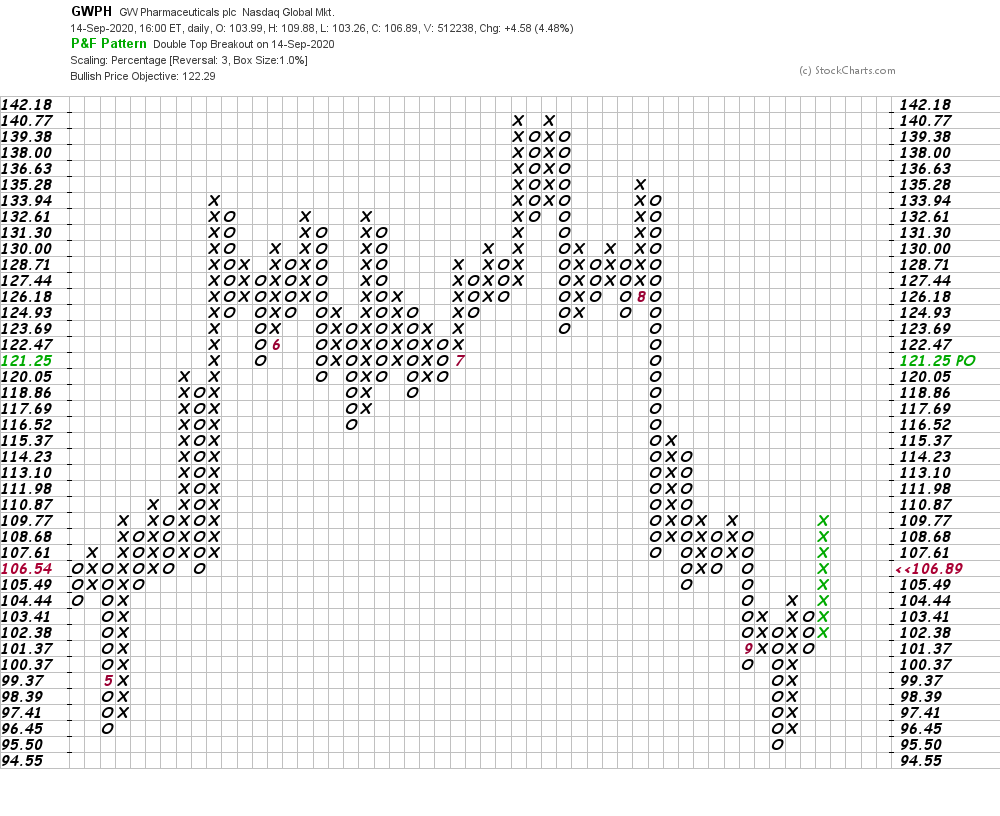 Bottom-line strategy: The daily chart of GWPH needs more development and stronger signs of aggressive buying to get me to recommend the long side. Aggressive traders who find the company attractive will need to risk a close below $90.
Get an email alert each time I write an article for Real Money. Click the "+Follow" next to my byline to this article.
TAGS: Investing | Stocks | Technical Analysis | Pharmaceuticals | Mad Money | Executive Interview