Of course, there was no -- or very little -- follow through in the down-and-outers, because they are allowed only a day or two in the sun before it's time for them to be left behind. This means there were, once again, no changes in any of the indicators.

I do, however, want to point out a few noteworthy items. First, would it surprise you to know that the Transports are up 70% since the lows in March, while Nasdaq is up 67%? Yes, the Transports, the same group I am forever fond of and the same group I tend to fuss over. I know, this all sounds like a distinction without a difference, but why doesn't anyone hoot and holler over the Transports the way they do tech?

The Dow Jones Transportation Index still has a hurdle just overhead (resistance) to make a new high, but when you consider that the airlines have been laggards, you have to admit the rise in the Transports is impressive, isn't it?

Now, we should talk about the horrible banks. I am not sure how they could be any more hated, except, I suppose, if the Bank Index cracked back under $70, which is still about 10% from here. Well, then, they would surely be on everyone's "do not own" list.

Shockingly, they hang on by a thread to this uptrend line.

Now let's look at the chart of Citigroup  (C) , which has had a terrible two days, losing more than 10% in that that time. That volume is literally off the charts. It is the highest in more than five years. Someone wants, or wanted out, and wanted out badly. 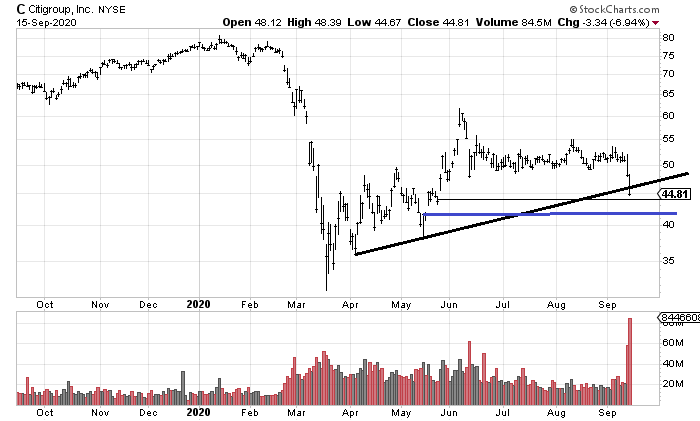 There is a little gap to fill from late May fractions below Tuesday's close. And there is a bigger gap to fill (blue line) a few more bucks down. If Citi can hold here -- a big if -- and quickly recapture that uptrend line, then these last two days will look like capitulatory selling, such as we saw mid-June. If not, then there is clearly something more concerning happening here, such as we saw in late February.

On the market as a whole, I know we're not supposed to even consider that the market might not be up on a day the Fed opines, but even if it is down Wednesday or Thursday, it will still be oversold. The one thing we do not want to see is to go back to where we were a month ago, where it was a handful of big cap stocks taking the market up and everything else heading down or faltering. That sort of action is bearish.