For his Executive Decision segment of "Mad Money"Thursday, Jim Cramer sat down with Matt Maloney, founder and CEO of Grubhub Inc. (GRUB) , the food delivery service with shares up 18% over the past month.

Maloney said Grubhub was among the leaders in revolutionizing the food delivery business and now is doing the same for pickup as well. He also said Grubhub hasn't received any offers to be bought, nor is it soliciting offers to be bought. When asked about some of Grubhub's privately financed competition with sky-high valuations, Maloney said losing money is not a sustainable business model. He said a "reckoning" in the industry is likely coming sometime in 2020.

Let's check out the charts of GRUB.

In this daily bar chart of GRUB, below, we can see that prices have been recovering from a long decline. Prices gapped sharply lower on huge volume in late October. Prices made a low by the end of October and have traded up toward the underside of the declining 200-day moving average line. Prices never made a retest of the late October nadir, so I see the rise from that low as more short covering than outright buying. Buyers, I believe, tend to be more reserved after a stock has declined from around $150 to nearly $30. What is the rush to buy?

Yes, the On-Balance-Volume (OBV) line does show an impressive rise since early November, but again this could be aggressive short-covering. The Moving Average Convergence Divergence (MACD) oscillator crossed above the zero line in December for a buy signal, but recently the indicator has narrowed toward a take profits sell signal.

In this weekly bar chart of GRUB, below, we can see a chart pattern that we fondly called a "round trip" in the old days (the early 1970s) of commodity trading. GRUB made a big rally from the low $30s to $150 or so and all the way back again like it never happened. My experience tells me that prices should make a long sideways base pattern before being considered a buy again. Prices have quickly rallied to the underside of the declining 40-week moving average line, which acted as resistance last year. The weekly OBV line has shot up, but its longer-term pattern is still in a decline from early 2018. The MACD oscillator crossed to the upside from below the zero line in December for a cover shorts buy signal. An outright go long signal is likely to be off in the future somewhere.

In this daily Point and Figure chart of GRUB, below, we can see that the software is projecting a possible upside price target around $70 -- right in the middle of a large overhead resistance area. 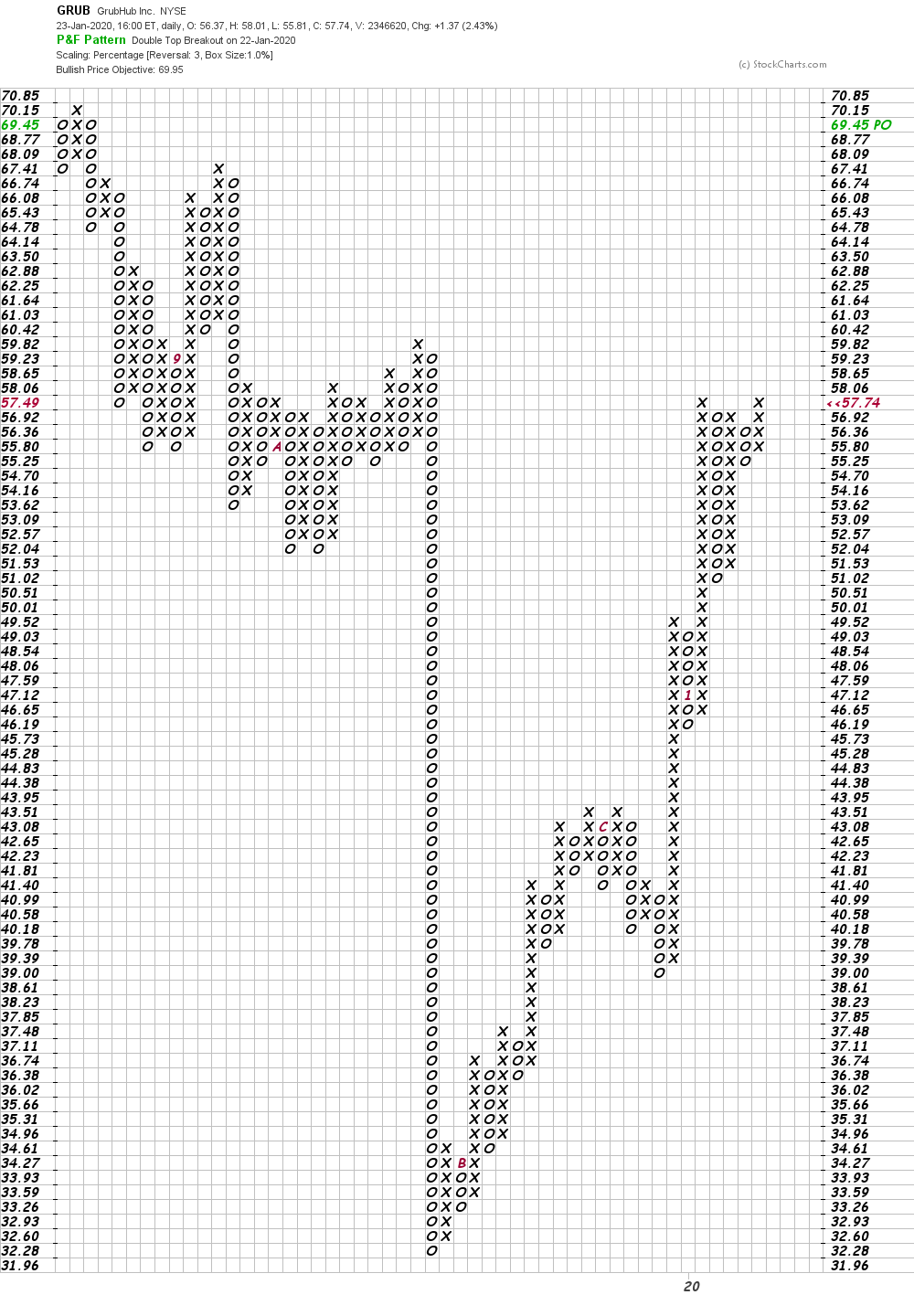 Bottom line strategy: GRUB could continue to rally to around $70, but it will need to contend with overhead chart resistance and traders would need to risk a close below $46. This is not the kind of risk/reward setup I would recommend. Avoid.

Get an email alert each time I write an article for Real Money. Click the "+Follow" next to my byline to this article.
TAGS: Investing | Stocks | Technical Analysis | Consumer | Food & Drink | Restaurants | E-Commerce | Mad Money | Executive Interview | Real Money