So clearly. One thinks.

The wise one cries out.

Create to advance, then evolve to adapt.

So as to create yet again.

The Chinese government needed to have a good night. There needed to be more evidence that all of the additional liquidity, the increased loan activity, the ramping of fiscal spending across multiple levels of government was indeed working. Will that all amount to more trouble at a later date? Is this just another kicking of the proverbial can?

That does not matter in the moment. This one moment. The Chinese needed to show some better data coming out of the Lunar New Year. To justify recent stock market gains? Not the half of it. To appear to take a stronger position as a potential trade deal with the United States approaches? Getting warmer, young friend. So it is that China's National Bureau of Statistics stepped to the plate. Two outs, bottom of the ninth. In need of a rally.

GDP. Bang. Retail Sales. Bang. Fixed Asset Investment. Bang. Bases loaded. Industrial Production? Oh, baby... that one is outta here. Grand Slam. Unemployment improved as well, though less focused upon than some of these others. Five for five. Some will doubt the numbers. Maybe they're right. Asian markets are slightly higher. Chinese markets are only slightly higher themselves. Then again, those markets did run ahead of the data.

Fact is that those who worry most about global growth will pause for a breath today. For one moment. Likely I think it might be, that both the U.S. dollar and U.S. Treasury markets surrender just a pinch of safe-haven value... and that's a good thing. Commodities will breathe better on this news. For now. Does this push or pull the U.S. and China closer together, or further apart?

While it is clear, I think, that Asian markets had priced in better Chinese macro, it seems likely that U.S. and global equity markets have also at least partially priced in a seemingly amicable deal between Presidents Trump and Xi.

What if we do see a deal that appears at the outset to be a beautifully composed orchestra piece, only to find that some of the musicians are not as they appear? The market, I feel, will most likely hold something back. There will be the knee-jerk reaction, then they will sell the news. Those moves will be playable, if you're an algorithm.

It will be then that market direction will be determined. I think we can be relatively certain that China will commit to significantly reduce the bilateral trade gap. That means soybeans, natural gas, airplanes, and semiconductors. It also means bad things for others who have benefited, or would have, due to continued trade hostilities. That recent problems at Boeing (BA) do complicate this matter.

There will be structural reform. To what degree, in practice, we cannot know. Anything that fails to open Chinese markets to foreign competition, while not providing sufficient enforceable protection against intellectual property theft, and forced partnerships as a disguise for the transfer of corporate technologies, will not be tolerated. This is why both sides will reserve the right to retaliate, This is why some tariffs may be left in place. This could be grounds for what ends up looking as much like a Cold War as it does a Trade Truce. We think we are so close. We may be, even upon handshakes and smiles... so very far.

The woods are lovely, dark and deep,

But, I have promises to keep,

And miles to go before I sleep.

Apple (AAPL) and Qualcomm (QCOM) have apparently kissed and made up. Agreeing to eschew all global litigation, the two have instead reached a six-year licensing agreement, while Qualcomm will supply Apple with chips for years to come. The winner? Qualcomm (obviously), as that firm no longer faces the prospect of losing tens of billions of dollars in court and will instead see a noticeable improvement in earnings going forward, well above industry projections.

I will maintain my $240 price target for Apple, as this will, in my opinion, have a sideways to downward short-term impact on the stock. But in the end, it puts Apple back on track in terms of producing mobile products for the 5G world. The loser here is Intel (INTC) , as that firm had the opportunity to fill a void that will now just not be there.

Down goes Frazier. Down went Sprint (S) and T-Mobile (TMUS) overnight. The Wall Street Journal ran a story on Tuesday evening that indicated the possibility that the Department of Justice will not approve the merger of the third- and fourth-largest U.S. wireless service providers. At least not the way the deal is currently structured. It may be time to get a haircut and get rid of the sweat suit. Just one kid's opinion.

Netflix (NFLX) reported Q1 earnings results on Tuesday night. Easy beats for EPS and revenue. Sizable, yet slowing, revenue growth. The firm even beat expectations for subscriber growth here and abroad. So why the overnight wiggle? The firm guided those new subscriptions below Wall Street consensus for the second quarter. The firm also guided profitability for the second quarter lower, as it expects to see its full-year free cash flow deficit expand.

Incredibly, many analysts across the street had not anticipated reduced margins ahead for the name as heavyweights like Disney (DIS) , Apple, AT&T (T) , Amazon (AMZN) , CBS (CBS) and Comcast (CMCSA) all move in on this turf. Even for those who believe that Netflix is "best of breed," and I am not saying that they can't be, the expectation has to be for downward pressure on pricing.

After Disney CEO Bob Iger detailed his expectations for Disney+, and where that product will be offered to the consumer, there can be no doubt about the loss of pricing power for the streaming entertainment business. Netflix is, by that measure, overpriced. The stock? Certainly. The service? Yes, that too.

In fact, my thought is that at the pricing levels that we now must anticipate, perhaps the field thins somewhat as a name or two listed here ultimately decide to sell content rather than moving forward with plans for direct competition. There's a reason we love free market enterprise. It works.

To a few who live in the mid-Atlantic states, Chessie is a legendary sea monster residing in the Chesapeake Bay. On trading floors up and down Wall Street, Chessie is a railroad, and an efficient one at that. CSX Corp. (CSX) crushed Q1 earnings on Tuesday night. Why? In the grand tradition of the late, great Hunter Harrison, these guys know how to run a railroad. You guys know what an operating ratio is? I'll tell you what, you want to trade the rails, you better. Railroads are measured by this equation. Remember it.

Back to our story. The firm set a quarterly record for its own operating ratio back in Q1 2018 when they posted a 63.7% mark. Last night, CSX put a 59.5% print to the tape. Rock on. Earnings up. Revenue up. Merchandise volumes up. Pricing power up. Expenses? Down. Trade deal? Growth not quite so slow? High prices for energy? That's right. The rails. Check this out. 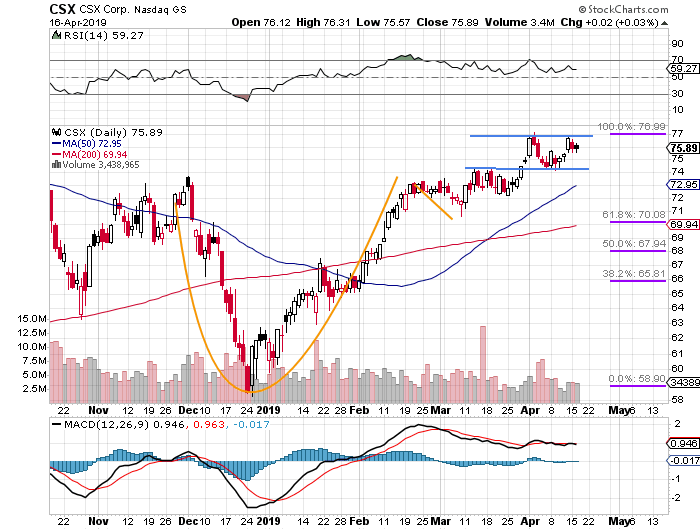 I'm not sure what I see here, technically. I am sure that I do like what I see. The name is either still breaking out of that orange cup with handle, or given where the name is trading overnight, about to break out above the short period of consolidation in blue.

The former would offer up a price target of $90. The latter a more modest target in the low $80s. I am already long $76 calls expiring this Thursday, as well as short a cascading series of puts with lower strikes that also expire Thursday. In other words, I have a very nice set of options trades that I could cash in Wednesday morning, if the shares open close to where they trade overnight (around $79).

In related news, look for quarterly results this morning from Kansas City Southern (KSU) , and Union Pacific (UNP) Thursday. Both bear some technical merit, though I think KSU has a stronger chart. Therefore, I come in long that name.

Get an email alert each time I write an article for Real Money. Click the "+Follow" next to my byline to this article.
TAGS: Earnings | Economy | Investing | Markets | Options | Put Call | Stocks | Technical Analysis | Trading | World