You probably already know I am a firm advocate of muting the news. It's not that I don't read or listen or watch the news. I am a news junkie. I love it.

But when it comes to the markets, the news can often mess with your head. If we focus on the statistics and the indicators, we find that the news often somehow manages to fit what the indicators are saying.

A few weeks ago I was asked, what could possibly take the market down? I had no idea. If we knew then, wouldn't it already be priced in? So now the news comes along that President Donald Trump is back to being "Tariff Man," and it sounds like the trade negotiations with China are on shaky ground.

We didn't know that in advance, we just knew that the market's indicators were overbought, and there was too much complacency in the market.

So what did Thursday bring us? I'm going to start with a few minor positives. First of all, the volume for the Invesco QQQ Trust (QQQ) was high. As you can see on the chart, it tends to get high (that's those red bars at the bottom), when folks get scared and sell.

And as we all know, until there is enough selling to get the market oversold and get sentiment negative, it's hard for the market to rally well. So here's a first step toward that. 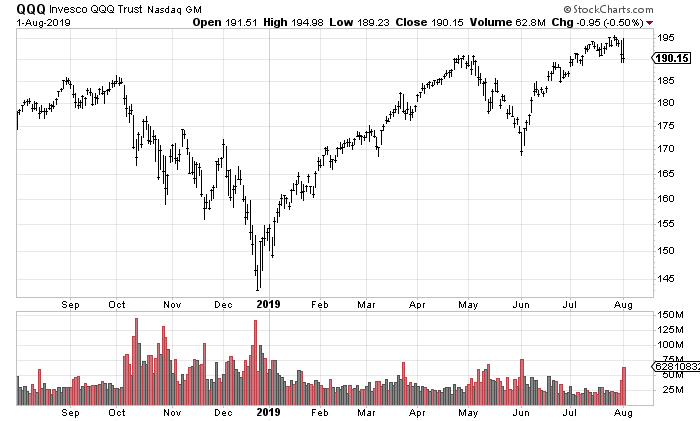 Then I will note that the put/call ratio finally pushed up, this time to 106%, which is the highest since early June. We did not see this on Wednesday, so this is a welcome change. Now the 10-day moving average of the put/call ratio is still quite low, but higher readings move the moving average up, and when it rises enough, we know there is enough fear in the market.

Breadth wasn't terrible for such a hard down day. But I would note that when we were rallying in the morning, it wasn't particularly good. The McClellan Summation Index is still falling, as it has been since mid-month. It now needs a net differential of plus 1,900 advancers, minus decliners on the New York Stock Exchange to halt the slide. At plus 2,000 the market has dipped a toe into oversold territory. At plus 4,000 it has gotten extremely oversold. Again, at least it's heading toward an oversold condition.

My own Oscillators don't show any sign of a good oversold condition yet, though (this is based on the math behind them).

What was not good about the decline was the huge rise in stocks making new lows. The NYSE saw an almost doubling of new lows from two days ago.

What is also not good is the American Association of Individual Investors (AAII) bulls finally jumped into the pool with its highest reading since early May. The bears fell to the fewest since then, as well. Note the four week moving average of bears is still falling. That will need to "rally" for me to believe sentiment has gotten too negative. 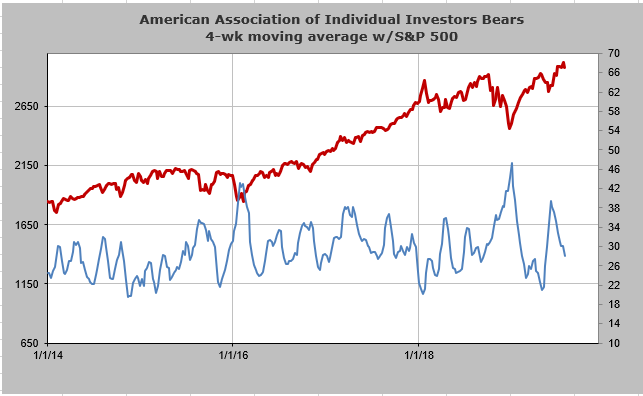 The market moves from oversold and fear (late December) to overbought and complacent (April) to oversold and fear (late May) to overbought and complacent (mid July). I know it's been a long time since many have seen these sorts of cycles, but they are typical, or they used to be. It's a process. The process has begun to head back toward fear and oversold.

Get an email alert each time I write an article for Real Money. Click the "+Follow" next to my byline to this article.
TAGS: Investing | Stocks | Technical Analysis | VIX | China |