In Jim Cramer's look at the 30 stocks that make up the Dow Jones Industrial Average (DJIA) to see which names are investable amid coronavirus fears and a collapse in oil prices, he was bullish on Goldman Sachs Group Inc. (GS) , which trades at less than 7x earnings. Let's check out the charts and indicators for Goldman Sachs, which is a holding of Cramer's Action Alerts PLUS charitable trust.

In this daily bar of GS, below, we can see that prices have made a nearly non-stop decline from the zenith in February. The slope of the 50-day moving average line is now negative, so the math tells us what we already know -- the trend is down. Prices have broken below the 200-day moving average line and we can see a brief and unsuccessful bounce toward the underside of that line.

The daily On-Balance-Volume (OBV) line has entered a downtrend, which tells us that sellers of GS have been more aggressive with heavier volume traded on days when GS has closed lower. Investors want out. The trend-following Moving Average Convergence Divergence (MACD) oscillator moved below the zero line last month for an outright sell signal.

In this weekly bar chart of GS, below, we went back to 2015 to see what sort of risk we might have if prices broke the late 2018 lows. The lows of early 2016 would be the next logical target. Prices are below the cresting 40-week moving average line, so we know the longer-term trend is shifting. The weekly OBV line has turned down and the MACD oscillator is in a bearish mode as it approaches the zero line.

In this weekly Point and Figure chart of GS, below, we can see that the price action below the market is not likely to provide much in the way of chart support. That is the problem with fast moves -- no one has a chance to buy. A potential price target of $99 is projected and suggests the possibility of steeper losses. 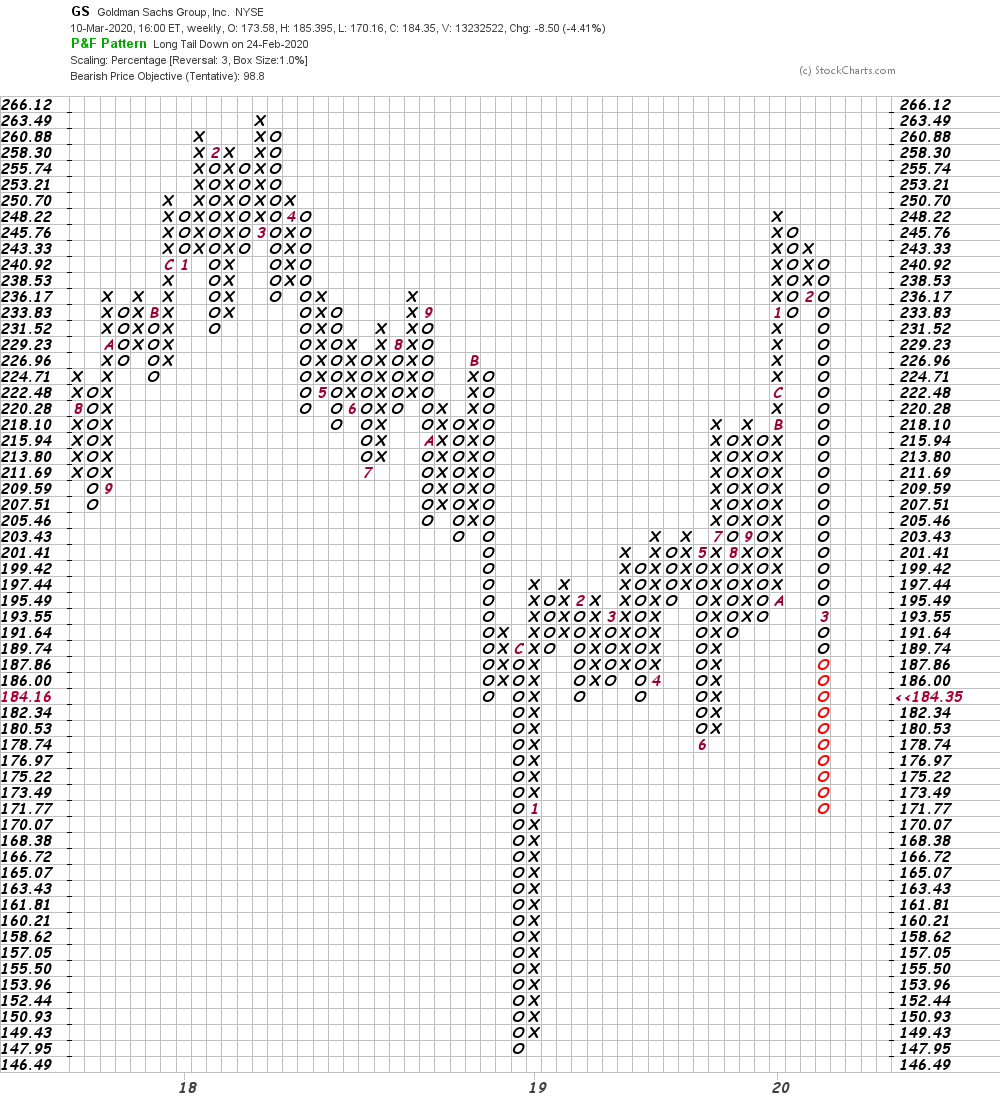 Bottom line strategy: I have no doubt that GS is a well-run and talent-filled company, but the old saying on Wall Street (or Bourbon Street) is when they raid the house they take all the ladies. GS could suffer further declines in the short run as the broad market probably has not made a durable low or bottom yet.

Get an email alert each time I write an article for Real Money. Click the "+Follow" next to my byline to this article.
TAGS: Investing | Stocks | Technical Analysis | Banking | Diversified Financials | Financial Services | Mad Money | Real Money