When markets are rising and it seems as if they will never go down and I start noting the overbought condition or talking about a correction, invariably I will get asked something along the line of: But what can take the market down?

The easy answer is if we knew, it would already be priced in.

Was it GameStop (GME) that took the market down? Oh, maybe. But it was likely all the speculation combined with the fact that most stocks had stopped going up weeks ago. The McClellan Summation Index told us that. And the fact that the number of stocks making new highs had begun to falter. And that sentiment was too bullish.

Or the energy group. The Energy Select Sector fund (XLE) is down 10% from the recent high and that slide began two weeks ago. Wednesday was simply a continuation of the slide.

Then there is Industrial Select Sector SPDR fund (XLI) , which apparently everyone loves but they haven't gone anywhere in two months. The selling started there in earnest two weeks ago as well. Wednesday's break was simply a continuation of the trend that started mid-January.

Then there are the bonds. Interest rates peaked two weeks ago, as well (do you see a theme here?). The yield on the Ten year comes into support around 1%. It briefly dipped under there on Wednesday but did not close there.

Finally there is the U.S. dollar, which bottomed three weeks ago and has been trying to push upwards since then.

What we saw on Wednesday was a curious day in the market. Volume was an all-time high. Just look at the volume for the Nasdaq. The New York Stock Exchange was similar. The oddest part is that up volume as a percentage of total volume on the NYSE was 55% and Nasdaq was 56%. I do not think I have ever seen indexes down 2%-plus and up volume greater than down volume. That's the speculative action still at work.

We also find the channels I have been noting are still at work. Thus far, none have broken. Here is the Invesco QQQ (QQQ) , which I have highlighted several times of late. The lower level is around $315-ish, depending on how thick your pencil is. What strikes me is that volume was up, but relative to the fact that volume on the exchange was so high the volume for the QQQs wasn't extreme. The last few times it has gotten this high, however, the QQQs have bounced. 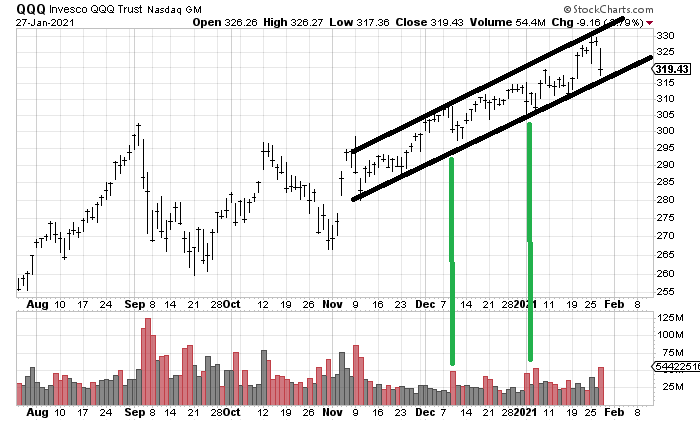 What was new in Wednesday's market? The number of stocks making new lows soared. Both the NYSE and Nasdaq had the highest readings since October. That means the 10-day moving average has turned up.

I think we can bounce, but I don't think this correction is over yet.

Have You Bought Ford, Lately?

Here's why the American carmaker is at the top of the shopping list.

Picking a bottom is nearly impossible, but if one does not start layering in where the mud gets deep, then one ends up a bit light when the train leaves.

After a Sharp Reversal on Monday, Confirmation of a Bullish Turn Is Still Needed

It is now important that the lows that were hit on Monday not be breached.

Market Timing Is for Suckers, and So Is Going 'Risk-Free'

Here's why you have to look at the 'big picture' to maximize returns.