"I know not how it was -- but, with the first glimpse of the building, a sense of insufferable gloom pervaded my spirit."

Equity markets sold off hard on Wednesday. Then, these markets sold off again on Thursday. Less sharply, but thanks to both early and late pressure placed upon the point of sale, a midday attempt to rally stocks amounted to little.

The macro reported on Thursday morning had been negative, but not quite the vision of coming economic death that traders were presented with on Wednesday morning when December data for both Retail Sales and Industrial Production left little room for even the most optimistic of thinkers to espouse anything but despair. Forward-looking despair.

So it was that after the New York Fed's Empire State Manufacturing Index of January had printed at some of the worst levels remembered that the Philadelphia Fed posted a very similar January manufacturing survey in a state of decline, but not in the absolutely awful way that New York had. Sure, Philly put a fifth consecutive month of contracting activity to the tape (an eighth in nine), and sure, New Orders and Unfilled Orders are still contracting in Philly, but New York was much worse, and in the manufacturing world, if not in the NFL, Philly is more important than New York.

It was the weekly number for Initial Jobless Claims that gave some market participants hope as well. Housing Starts for December had also printed in decline for a fourth consecutive month, but initial jobless claims, the weekly number of folks filing for state unemployment benefits, continues to ebb. Though we hear of heavy layoffs from both the worlds of finance and technology on an almost daily basis, labor markets continue to defy the aggressive stance of our central bankers and hang in there. Can that last? Can the consumer, his or herself, continue to hang in there? Or after months like November and December, have they already packed it in?

The most frightening thing that I have seen of late concerning the US consumer was what Discover Financial (DFS) revealed after its fourth-quarter earnings release late Wednesday. This is one reason why the financials performed poorly on Thursday, why the midday rally failed, and why more cyclical sector SPDRs such as the Discretionaries XLY continue to underperform more growth or defensive sectors.

Discover posted a nice quarter. Earnings beat, revenue beat. Total loans were up 20% year over year. Credit Card loans up 21%. The total net charge-off rate for the quarter was 2.13%, 76 basis points higher than Q4 2021. During the earnings call, Discover posted an expected net charge-off rate of 3.5% to 3.9% for full year 2023, which would be up from 1.82% for full year 2022. It did not matter that Discover also projected double-digit loan growth and net interest margin that would grow from 2022's 11.04%.

What did matter was that with credit card debt at all-time highs, with savings rates plumbing new lows and the average credit card interest rate soaring to 19%-plus, a major credit card issuer, the perceived target of which is consumers in lower- to middle-income households, is preparing for the worst. The stock closed much higher than it opened on Thursday, but this is huge. A bigger deal than is presented. If lenders are now expecting an increased inability for US consumers who are maintaining familial standards of living through the overuse of credit that they probably cannot afford to handle that debt, how can consumers still be expected to carry 70% of the US economy?

Is Discover one of a kind? Synchrony Financial (SYF) reports early this coming Monday, Capital One (COF) reports after the close this coming Tuesday, and American Express (AXP) will step to the plate ahead of the opening bell next Friday. Within a week, we'll know all we need to know about the health or lack thereof for the US consumer.

On Thursday, US Treasury Secretary Janet Yellen declared that the US had hit the federal debt limit. Yellen said that through going to extreme measures such as not funding certain pension plans, the federal government can keep on keeping on into June. That means that Congress likely does nothing until June.

Personally, I do believe in having a debt limit if it were to be respected. However, given that our fiscal policy decision-makers have never shown the least bit of discipline and have never respected the concept of balancing a budget, having a debt ceiling is foolish. Either abolish the very idea or stick to it. No more nonsense. 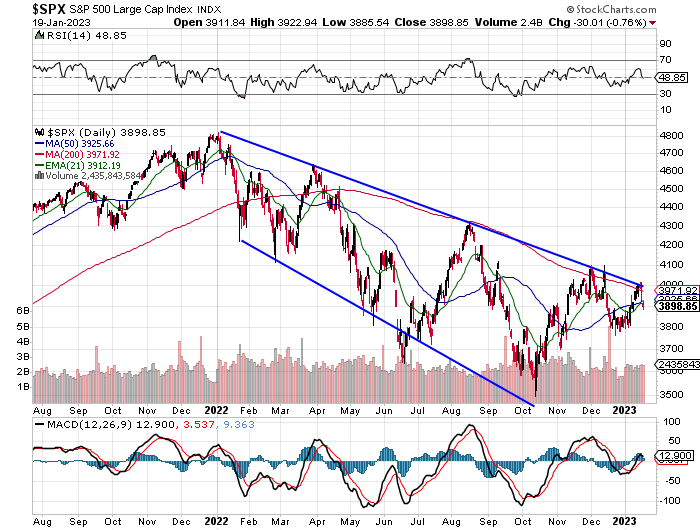 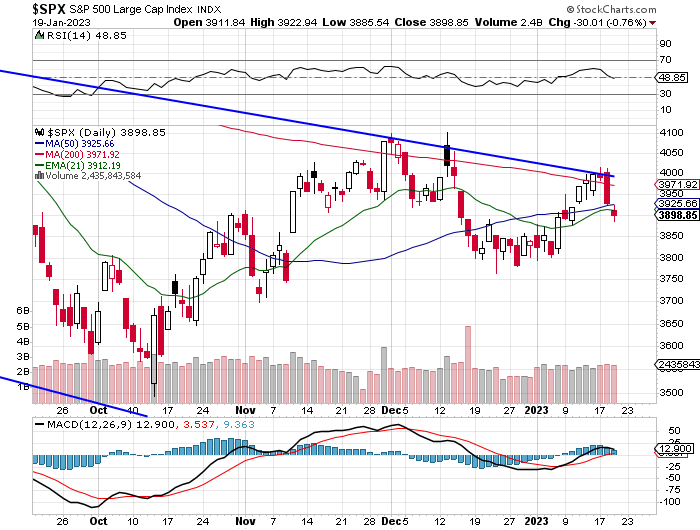 Readers will see that the 50-day SMA not only provided resistance for the S&P 500 on Thursday, but that the index also failed to hold its 21-day exponential moving average (EMA). This is all with a neutral reading for Relative Strength and a daily moving average convergence divergence (MACD) that has not yet displayed a bearish cross-under of the 26-day EMA by the 12-day EMA. The one saving grace that I see is that trading volume was lower on Thursday than on Wednesday across this index, across the Nasdaq Composite and, in aggregate, across the listings of both the New York Stock Exchange and the Nasdaq Market Site.

What that means to me is that on Wednesday professional money moved to reduced levels of long-side exposure in response to the loss of that 200- day line. Swing traders also likely fled as this index gave up the 21-day line. However, the pros held back from going through a second day of heavy selling and may have only cleaned up some loose ends on Thursday as they wait on Friday morning to see if that 50-day line can be retaken.

I really can't tell which way the wind blows here on Friday morning. I do think this: From whichever direction that we do feel that breeze, there will be a build-up of momentum in said direction. Should the S&P 500 fail to retake the 50-day line, there could be a significant risk-off move into the weekend. However, a retaking and holding of that line will boost confidence ahead of the Fed's blackout period. Our central bankers will be forced to shut their stinkin' pie-holes starting tomorrow. I only see Walker and Harker speaking today. Harker has proven of late to have an ability to reason at least on the level of the Upper Paleolithic Cro-Magnon, putting him far beyond the cognitive abilities of many of his peers. This could be a market positive.

Is It Live? Or Is It Memorex?

Netflix (NFLX) reported its fourth-quarter results on Thursday night. As the wee hours pass, I see the stock trading up $17, or almost 6%, after trading down $10, or 3.2%, during Thursday's regular session. Why the bounce? It certainly was not in the firm's performance.

I mean sure, Netflix added 7.66 million subscribers globally during the quarter, crushing estimates that were down around 4.6 million. That's not how Wall Street values these stocks anymore, though. Netflix fell short of meeting expectations for both the top and bottom lines for the fourth quarter. Revenue grew less than 2% year over year, so this is not a growth stock at this point by any means. Netflix has not seen 10% revenue growth since Q1 2022 and hasn't seen 20% revenue growth since Q1 2021.

It certainly wasn't the guidance. Netflix guided profitability for the current quarter again below what the street was looking for and well below year-ago levels. Revenue guidance met but did not really exceed what the street wanted.

So, why did the stock pop? It either had to be the subscription number that has not yet shown an ability to significantly boost profitability, or the fact that co-founder and co-CEO Reed Hastings has announced that he will step down from his role as chief executive. Chief Operating Officer Greg Peters will be elevated to co-CEO and will serve alongside Ted Sarandos, who has been co-CEO since 2020. Hasting will stay on as executive chair.

The stock price has doubled since May. The balance sheet is not in bad shape. The stock does trade at 31 times forward earnings. Short interest is not excessive. I would say that if you've already missed the move of the past seven months (hand raised), then trade it, don't own it.

If You're in Neurocrine Biosciences Consider Getting Out: Here's Why