Or so it seems. What if I told you that equity markets sold off almost by accident on Thursday? Silly, I know. Markets traded back and forth in extremely choppy trade and appeared nearly directionless for much of the session before the powers that be (algorithmic traders) picked a direction. In the end, or rather by the close. The S&P 500 had given up another 0.58%, while the Nasdaq Composite surrendered a mere 0.26%. The Russell 2000 actually managed to sneak its way into the green on Thursday, albeit by a smidge.

The session's final score left the major indexes on the doorstep of a seventh consecutive "down" week, which would be the longest weekly losing streak for the S&P 500 in particular since 2001. Thursday's final score left the S&P 500 at an even 3,900, which places the index down 18.16% for the year and 19.1% below the Jan. 4 intraday high. Close enough so that the S&P 500 could enter what the financial media considers bear market territory with perhaps one more sharp downdraft.

I refer to the financial media there because most market participants have already considered equity markets to be in a bear market for as much as a month, maybe longer. March was a good month for traders and investors, but it has been all blood pretty much all the time since. The Nasdaq Composite peaked as early as November, and while down 27.21% year to date closed Thursday night 29.6% off its Nov. 22 intraday high. The Russell 2000 stands down 20.89% for 2022 and 27.7% off a Nov. 8 intraday high. For many investors, the worm turned back in November and the bear is already well-developed here in mid-May, not merely in an embryonic stage. The Philadelphia Semiconductor Index now stands 28.9% off its all-time high.

So What Is This Accident?

The story of this week's pressure on equities has been one of disappointing margins revealed by corporations reporting quarterly earnings that have the closest relationship with the US consumer, the broad-line retailers. Secondary to that pressure and key to this week's support for Treasury securities as key spreads continue to flatten has been the poor macroeconomic data published over the past two sessions. Remember that it was just Tuesday that we were so impressed by April Retail Sales and April Industrial Production.

Since those two high-profile data-points hit the tape, April Housing Starts and April Existing Home Sales both missed their marks, putting a very disappointing May FHFA Housing Market Index number that had been for the most part overlooked on Tuesday back in focus. Remember, real estate has been the last pandemic darling to more or less evade experiencing a post-crisis return to earth. A massive national loss of perceived wealth or a "reverse wealth effect" would, in my opinion, make these markets highly susceptible to continued tightening of monetary conditions.

That's not the accident I speak of, however. The Philadelphia Fed Manufacturing Index for May hit the tape on Thursday morning at a paltry headline print of 2.6, coming off of April's 17.6, and well off of expectations for something in the 14/15 range. The "accident," so to speak, is that traders saw the Philly survey as confirmation of the New York's Empire State Manufacturing Index for May that printed in surprise contraction on Monday.

The difference -- and it is a big difference -- is that New York experienced a simultaneous collapse in New Orders (which are the lifeblood of any manufacturing-based survey) and Shipments. While Philadelphia's survey (which is a bigger deal in the manufacturing world than New York's survey) saw the headline drop from 17.6 to a still (but just barely) expansionary 2.6, New Orders for May printed at 22.1, up from April's 17.8, while May Shipments improved from April's 19.1 to 35.3.

Does that mean that the survey is wrong? No, it's a survey. Managers are asked questions, The results are based on their answers. What this means is that far more purchasing managers in the Philadelphia district reported improved results for their businesses in May than in April, but when asked for their evaluation of the level of their general business activity, their response was far less robust. The headline number is the result of a question asked and not some kind of average of sub-component responses. Looking through the replies, prices remained hot, employment remained hot, unfilled orders increased...

But Sarge, where's the accident? Well, it's actually no accident, but it does force overshoot, inefficiency at the point of sale, and correction. The headline response appears out of line with business conditions in the Philadelphia area at the time of the survey. Keyword-reading algorithms that trade baskets of stocks at speeds timed in microseconds don't wait for explanations, they just go. When they go, they also force momentum.

Former New York Stock Exchange president and Goldman Sachs (GS) executive Duncan Niederaurer once mocked the physical presence of human practitioners on the NYSE trading floor, saying he would rather have orders executed by computers than by "five guys named Vinny." Safe to say that in 2022, most traders and market participants would happily give up a lot in the way of speed to permit five guys or gals bearing any name to get involved at a centralized point of sale.

Most US equity indices may have traded lower on Thursday, but there were positives. For one, the lows of last Thursday's bullish reversal have still not been pierced to the downside.

Sarge, are you saying that the attempted change of trend launched last week is still intact? Incredibly, from a technical perspective, yes. The attempted rally is obviously under intense pressure, but as long as the S&P 500 trades above 3,858 and the Nasdaq Composite trades above 11,108, there remains two outs and two strikes on our batter in the bottom of the ninth, and that kid at the plate keeps fouling off pitch after pitch.

Equities rally on Friday? That would mean that with all the anger, fear and hatred experienced by markets this week, that somehow this faint slimmer of a rally has survived.

Even in a down tape on Thursday, winners beat losers at the NYSE by a slim margin and at the Nasdaq market site by a rough 5 to 4. Advancing volume took a 57.3% share of composite NYSE-listed trade and a 59.4% share of that same metric for Nasdaq-listed trading. Aggregate trading volume was not a story on Thursday, as that number increased slightly for Nasdaq names and traded almost precisely in line with Wednesday's total for NYSE listings.

On Friday, China reduced its five-year loan prime rate from 4.6% to 4.45%. This rate is set by a committee of Chinese banks and published by the People's Bank of China (PBOC). It directly impacts outstanding borrowing costs across Chinese mortgages. A rate cut that would target support for China's real estate sector as strict COVID-related lockdowns have damaged that economy had been expected this week, but this was a bit more than expected.

In response, Chinese and Asian stocks rallied, and that rally carried on through Europe this morning. This has also had a positive early morning impact on US equity index futures. Does the rally take hold? We'll see. Sure would preserve the market condition mentioned above.

Wrapped Up With a Bow

The US Senate on Thursday, with broad bipartisan support, passed with an 86-11 vote $40 billion in military, economic and humanitarian assistance for Ukraine. This exceeds the $33 billion that President Biden sought. This means more artillery, more anti-tank weapons, more unmanned aerial vehicles (drones), more radars, as well as non-lethal types of aid.

Chief beneficiaries on the defense side would be Lockheed Martin (LMT) , Raytheon Technologies (RTX) and Aerovironment (AVAV) .

What to Do With Kohl's

Sell Kohl's (KSS) , would seem to be the appropriate response. On Thursday morning, the retail chain reported its first-quarter results. Awful is the word that comes to mind. Earnings missed by a country mile. No, make that two country miles. Revenue contracted year over year. Kohl's outlook for the full fiscal year took both top- and bottom-line performance below consensus, and CEO Michelle Gass appears to be less and less up to the task at hand.

There were supposedly bids for Kohl's that ran as high as $68 per share. Unfortunately, shareholders rejected all 10 of Macellum's board nominees. Chairman Peter Boneparth is rumored to be against selling the company. In a nutshell, just about everything has gone wrong for those long this name, especially those like me, who only got long recently in anticipation that Kohl's was well on its way to being sold. 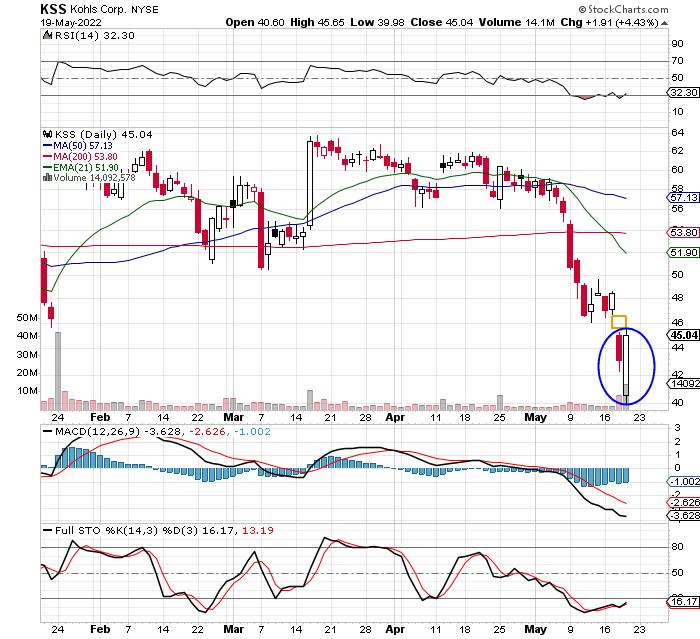 Interestingly, with Kohl's shares technically oversold and with retail under intense pressure, this stock staged a bullish reversal on Thursday, coming off the company's horrific morning, experiencing an "outside" day after creating an unfilled gap the day prior. No, I don't like this name at all, but I did add to my still-small long on Thursday morning's dip. I think Kohl's has become a poorly managed version of its old self, still talking about Sephora as if that's a game changer. Gee whiz.

I'll sell these shares if the lows of Thursday are breached, but with cash levels still elevated and really not much at stake in KSS, I think I can afford to see if somehow, management can be put in a position where a bid might be made that can be taken to shareholders. That is, someone thinks this chain is worth the time and effort. Make no mistake, this is a trade, not an investment.

Get an email alert each time I write an article for Real Money. Click the "+Follow" next to my byline to this article.
TAGS: Earnings | Indexes | Interest Rates | Investing | Stocks | Retail | Manufacturing | Real Money